Stephen I & II OTE OSP OSB EPCEP OM ORL IO (Stephen Freayth); is the Emperor of the Abeldane Empire and King of Alenshka and the Legatian Emperor and King. He is one of the three designated, both constitutionally and de facto, founders of Abelden alongside Rachel I, Empress of Abelden and Donald, Emperor of Abelden. He is known as Andres II in Andrestan and hence the name Stephen I & II. Formerly, he was the Emperor of Militarmia.

A liberal conservative and later conservative, Stephen was previously a staunch left-wing supporter during the beginning of his career. He started his early micronational career back in late 2010, with him joining the community in 2012. Since then, he has established several micronations during his early career and has now maintained Abelden as his primary micronation since 2014, expanding it and continuously improving it. His reign in Abelden saw a major increase in size and population and an active interest from several members of the community in the Reichsversammlung, the legislature of Abelden. Stephen has also been a citizen to other several well-known micronations such as Mercia, Paravia, Mcarthia and etc.

Stephen is currently the Prime Minister of Legabelden and Generalmememarschall and was formerly the Minister of Media and Public Affairs. In addition to that, he was also the head of government of several micronations and has held several offices including Prime Minister of Pacem, Lord Regent of Esse, First Minister of Mcarthia, Riksminister of Paravia, Chief Executive of Edenopolis, Chief Minister of Beacon City, and Lord Vice President of the Democratic Union of British States.

The breakup of the union of the Abeldane Empire and the Kingdom of Alenshka was a decision made by him and Kaushik Legata to protect the independence of the Empire. The Commonwealth was then established in order to protect the interests of Abelden in Alenshka.

Stephen became the Emperor on 6 June 2014 after signing the declaration of establishment and Donald West became the first Vorsitzender of Abelden. Under his first reign, he continuously improved the Empire and increased the amount of citizens from 8 to 15. As Emperor, he wielded several powers under his absolute authority and mostly made decisions by himself. During his reign, several institutions and companies were established such as the Imperial Central Bank, Abelden PrintWorks and the Abeldane College of Arms. By September 2014, signs of inactivity were showing and citizens alike were either leaving or have ignored issues in the Empire.

Stephen abdicated on 24 September 2014 on 6:30 AM (UTC +04:00) in favour of the throne to HI&RH Princess Rachel, who was now Empress Rachel. Reasons that he cited for his abdication was reducing his time in the micronational community and focusing on his studies.

By this time, Abelden was in a deep inactivity and so after deciding on returning to micronational affairs once more, he persuaded Emperor Donald, who was now Emperor after Empress Rachel abdicated on 16 December 2016, to abdicate and give way to a new and reformed Empire. On 25 December 2014, Emperor Donald abdicated and Stephen became the Monarch for the second time and was crowned for the first time on the same day.

His second reign saw a major reform in the Empire, mostly in the government. Ministries were being established and a nobility system was established, with Andrew Janiszewski the first being granted a title by Stephen as Duke of Nayhemia. Several micronationalists, such as Brooklyn Hewitt and Levi Newman came in to join the Empire and at this point, Abelden reached its peak of activity and citizenship in terms of numbers and applications. He also established the American Micronational Co-operation, which aimed for micronations in the Americas for a joint collaboration and sharing of ideas, and became its first and only Secretary-General. 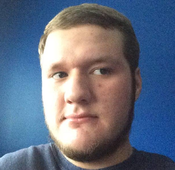 Michael Thomas Brazeau, who was elected as Stellvertreter in March 2015 and the main focus of the crisis.

As Emperor, he also participated in the affairs of the government and therefore on 10 January 2015, he formed the Conservative Party of Abelden with Damian Billbrough and became one of its original members. The Reichsversammlung was also established on the same day in order to facilitate the need for the democratization of the Empire. On the same day, the first general election was held and which was won by the New Democratic Party and Janiszewski continued his term as Vorsitzender. Stephen's powers as Emperor was reduced and decisions made by him were either required to be approved by a plebiscite or a referendum.

On 22 February 2015, the second general election was held and was the turning point of party politics in the Empire. A crisis started after Michael Thomas Brazeau was elected as Stellvertreter. Brazeau was during this time well-known for his outspoken views and normally critised the New Democratic Party. Janiszewski called for the impeachment of Brazeau and received the majority support of most Abeldanes. Vaughan Smith was appointed by the Emperor to replace Brazeau and took office on 2 March 2015. By this time, Stephen could not stop the ongoing crisis and decided to replace Janiszewski with Smith and expelling Brazeau from the Empire. Smith's term did not last for more than a day and he was again replaced by Paweł Sadowski and was again appointed to become the Stellvertreter. The appointment of Sadowski was controversial and he defended his appointment by saying that it 'would improve [his] skills and [his] fluency in English'.

After making appointments to the government for the last time, Stephen abdicated for the second time but this time in favour of Prince Donald, who became Emperor Donald once again, on 6 March 2015. He left the Empire to become the new Emperor of Munkkia, but soon left after realising he still held several micronational citizenships which was not allowed for becoming the Emperor. He returned to Abelden and Donald once again abdicated after citing personal reasons and retiring from the community. He became Emperor for the third time on 24 March 2015 and was crowned for the second time on the same day.

After becoming Emperor, he appointed Former Empress Rachel I to become the Vorsitzender. The crisis saw several citizens leave and relinquish their citizenship and further decreased inactivity once more in the Empire. In an effort to combat the ongoing process of inactivity, a general election in July was held which was won by the Conservatives. Less than a month into office, Damian Billbrough resigned as Vorsitzender and Llewelyn Lawton succeeded him. A long period of inactivity happened during Lawton's term as Vorsitzender, but two general elections were held during his term and was reelected twice.

Desperate on reviving the Empire, he decided to federalise the Empire with the help of Patrick Renwick, Emiel Hardy and Mike Lewis. The idea of federalisation in the community revived and nations like Paravia and Nedland became federal entities following Abelden's federalisation. On 30 June 2016, a joint referendum was held between those nations joining the Empire, who were mostly members of the Abeldane Commonwealth and had Stephen as their Monarch, and the referendum received almost 90% of the citizens voting in favour for the federalisation and annexation of the states. Mike Lewis became Vorsitzender and Lawton became Stellvertreter on 12 July 2016. A new constitution was created in order to reflect the new status of Abelden as a federal state.

Legatia and other Commonwealth realms

He became the King of Legatia on 28 August 2014 following an agreement with Kauhsik Legata, the Prime Minister of Legatia, to turn Legatia into a Monarchy. The following day, it joined the Abeldane Commonwealth as its second member. Legabelden, a condominium state of Abelden and Legatia, became the third member of the Commonwealth and adopted Stephen as head of state on the same day. On 24 March 2016, Stephen changed the title of the Monarch of Legatia from King of Legatia to Legatian Emperor and King, in commemoration of his first year on the throne. Legabelden joined Abelden on 30 June 2014 as a federal state and he was succeeded by Harry of Legabelden as King.

Stephen is also presently the King of Alenshka since 6 June 2014, the same day Abelden was established. Alenshka was an independent nation and entity from Abelden and maintained their own separate foreign relations and heads of government, although the King mostly did his decrees alongside Abeldane decrees. On 30 June 2016, Alenshka became one of the federal states of Abelden and became the seat of the federal monarchy and all cities of Abelden became a part of Alenshka.

Besides Alenshka and Legabelden, Stephen was also the King of Dolangrad, Sinoland, Bosmansk and Emperor of Demirelia before all of them joined Abelden and he was succeeded by their respective appointed monarchs.

Role in other nations

Stephen joined Paravia in 2016 and was one of the figures present for the process of Paravian federalisation. Through Nedland, he became a citizen of Paravia and a member of the Chamber of Delegates, the lower house of the Riksting, the legislature of Paravia. Previously, he was the Riksminister from 9 December 2016, after being elected by the Chamber of Delegates to succeed Mikael Bokmann, the interim Riksminister, until 10 August 2017 when he resigned. He also is the Tsar of Viselander, a federal state in Paravia.

Through him, Abelden and Paravia maintain close relations and have usually cooperated in different occasions. Patrick Renwick, who is the Emperor of Paravia, is currently the Minister of Foreign and Commonwealth Affairs and former Vorsitzender of Abelden. He and Patrick maintain a close friendship and have worked together in other micronations.

As shared citizens continued to increase to most micronations active in Skype, Stephen was invited to join Nedland by NG in 2016. Here, he became the Deputy Prime Minister of Nedland until he resigned in July 2016. He was a member of the Great Kurultay and headed the Conservative Party of Nedland. Stephen was Deputy Advisor of Nedland from 28 September until its dissolution and was also the Khan of Terstegnia, a province in Nedland.

Relations between Stephen and NG became sour after NG insulted him on the Chamber of the Nedlandic Commonwealth in Skype, therefore cutting off any further relations with Nedland or NG and the result of the dispute previously between Abeldane Nedland. NG was a citizen of Abelden previously until Stephen banned him from entering Abelden after the illegal secession of East Nedland from the Empire. He was allowed to enter Abelden again once more in March 2017 when he was banned again by the Emperor because of the insults he threw to the Emperor in Skype.

Stephen joined Aarbaro after being invited by Artemis Langford to become a citizen and has chosen to take part in the politics of the Kingdom of Pacem, with Nick Kaos who is the present King. He was appointed as Prime Minister of Pacem by King Nicholas and was made Duke of Indo on 9 July 2017 for his services to the community.

With his position as Prime Minister of Pacem, not to mention his close friendship with both Empress Artemis and King Nicholas, Stephen is a respected and an influential figure in Aarbarian politics independent of his position as Emperor of Abelden (with which Aarbaro maintains a close personal friendship with).

Main article: List of titles, offices and honours of Stephen I & II

Throughout his years within the community, Stephen has accumulated several titles, honours and offices.

Stephen uses one Imperial Standard for both Abelden and Legatia. He also has an Imperial Monogram and uses it in his capacity as Emperor and King.