Newton, or commonly known as Newton von Uberquie, is the former Emperor of the Abeldane Empire and King of Alenshka. He is also a former Vorsitzender, First Minister of Mercia, a musician, poet, novelist, playwright, cartographer, statesman and a former journalist, and founder of Abeldane Social Ecology and Party of Royalists and Cooperatism. A founder and former leader of the Humanist People's Alliance, Newton grounded himself in Mercian politics and is regarded as such as a radical reformer. As Emperor of Abelden since 15 June 2018, Newton has become a more reserved figure. Newton also heads the House von Uberquie.

Newton stepped into Mercian politics in October 2014, as a foreign diplomat from Uberquiesenberg. He sought border negotiations with Mercia soon after his country had been created, of which he was Kaiser, to legitimise this country. Uberquiesenberg slowly became inactive over the following months and eventually dissolved in late 2015. Newton slowly integrated into the Mercian Parliament House, becoming a more vocal MP after the passing of the Partisan Democracy Act which created a basis for an electoral system within Mercia. Newton founded the Humanist People's Alliance with the Baron Whyatt, a close friend and long-standing MP in Mercia, in attempts to reform the more Christian based institutions within Mercia. His leadership of the party was met with acclaim and criticism from the opposition benches and from the newly formed National Liberal government, May 2015. He became Leader of the Opposition after winning four individual First Place votes in that general election, a record which has since been beaten.

Collapse of the HPA

Newton's leadership saw the creation of bills in Marriage and Copyright, as well as the instigation of the Mercian Education Gorsedh. However, Newton's radical agenda to stop religious symbols from being displayed publically was met with harsh criticism from the Mercian parliament, including his own party. Newton formally stepped down soon after this on the 24th of January, 2016. This prompted a short-lived Leadership election in the HPA, electing Baron Whyatt. Newton later left the party to pursue a candidacy as an Independent Green-Socialist, while the HPA reformed into the PDP.

On the 15th of May, 2016 - Newton was re-elected to Wibertsherne under his new Independent manifesto. Due to complications with voting rights and a delayed election, Newton had been criticised for the creation of a reactionary movement within Mercia, which slowly dissolved and the election was brought back on track. Circumstances in that election, due to NLP inactivity, caused Newton to join the Government Coalition later that day - along with People's Democratic and Social Democratic party members to oppose a fourth NLP term. On the 28th of May 2016, Baron von Uberquie successfully motioned a Vote of No Confidence in the Earl Eden's Premiership which resulted in the eventual election of Baron Whyatt as First Minister. Newton subsequently was appointed Minister for Culture, Media and Sport. On June 27th of the same year, Newton also became a joint minister under Foreign Affairs after the departure of Earl McCarthy. By this time, Newton aided the organisation of the post-by-election PDP government, being promoted to Deputy First Minister, while also remaining critical of much of the practice conducted by the government.

On the 28th of August, Newton motioned the second Vote of No Confidence, this team in the premiership of Baron Whyatt. The vote was passed with a result of 7-5 for the motion and Baron Whyatt resigned as First Minister. Von Uberquie leads an Interim Government for the remainder of the week until the official elections for First Minister were to begin on Saturday the 3rd. Newton appointed Earl Eden as Minister for Finance during this time, facilitating Mercia's movement to join the Micronational Economic Group. On Saturday the 3rd, Newton was uncontested in the elections for the new First Minister and subsequently became First Minister with a majority vote. 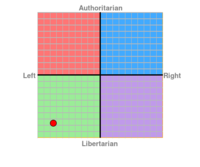 Newton was appointed Palatine-Viceroy of Uberquiesenberg, a new Mercian colony, on the 29th of August, 2016. By May 2017, Uberquiesenberg had separated from Mercia, lead by Newton's independence efforts from a failing overlord. Uberquiesenberg joined the Grand Unified Micronational that same year after Newton became Vice-Chair.

Newton joined Abelden in early June 2017, and founded the Abeldane Social Ecology movement and Social Ecology Party in Abelden, in order to fill a left-wing void present after the June Federal Election. Shortly after its formation, SEPA was invited to support the governing coalition led by Vorsitzender Patrick Renwick, in which Newton served as Minister of Defence until the 19 of July and the abolition of the Ministry. In the Landgraviate of Satirno, Newton's home state, landed by Landgrave James, Newton was appointed Grave and later, on the 30 of June, von Uberquie was appointed the Marquis of Middleham.

Later, On 9 August 2017, in the midst of the campaign for the August 2017 federal election, the Labour Party and SEPA held talks to form a unified leftist party. The two parties agreed to form Abeldane Social Ecology - The Green Labour Party (ASE-GLP), which contested in the election with von Uberquie as a candidate for Vorsitzender. The August 2017 election resulted in a great success for ASE and Newton, who was elected to the office with 48.28% of the first preference vote. Notably, Newton oversaw the merger of states during his term before resigning on 19 September 2017, citing personal reasons. Newton remained as Minsiter of Homeland and Geographical Affairs for the remainder of the ASE's Langford Ministry.

After a disappointing December 2017 election, whereby Newton only secured 32.73% of the Vorsitzender vote, von Uberquie was appointed as Leader of the Opposition of the Reichsversammlung.

Later, on the 14 of February, 2018, Newton was appointed as a Grand Prince of Abelden, Ervecysarich and became 2nd in line to the Abelden throne, behind HI&RM Nick Kaos. Newton participated in the creation of the Government of Alejandro Whyatt, as the Leader of the Party of Royalists and Cooperatism. The Whyatt cabinet is known for breaking its promise to defeat inactivity.

Following the abdication of Emperor Nicholas, Ervecysarich Newton assumed the throne on 16 June 2018 and became the second person after Nicholas to come from a different house other than the three founding houses. One of his first actions as Emperor were declaring a snap federal election on 21 June, and appointing the former Emperor Stephen, who had returned to Abeldane politics, Ervecysarich and first in line to the throne. Newton, during this time, is known for instigating radical reforms to fix the inactivity of Abelden - including staggering the electoral cycle to every 3 months, to create more common elections, and for merging many Federal states, from 10 to 5, to re-organise the population more closely. Furthermore, Newton was involved in the creation of a 2018 edition of the Abeldane Constitution, which, alongside a new Code of Laws, was enacted in November 2018.

Lord Newton of Essexia is a Member of Parliament and First Minister in the Parliament of Essexia. He is the leader of the the Greens, which is the ruling party.

Lord Newton joined the Commonwealth of Essexia prior to the 2020 Essexian general election, during which time he created his party, the UG&N. He was approached by Lord Jack (Lord Commissar of the Old Guard Party at the time) who proposed that the UG&N join the Giraffe Concordat, to which Newton agreed. Following Jack's accession to First Minister of Essexia in February 2020, Newton was made Crown Minister of the Environment due to his environmentalist political stance. In March, Newton received his one seat following the Election and has maintained his position since.

Following the Rhino Alliance's rise to power on the 30th May 2020, First Minister Lord Sam appointed Newton as Second Minister.

Currently, he serves as the First Minister, following several defections to the Greens after a series of by-elections in 2021.

Newton became acting Vice-Chair of the Grand Unified Micronational on April 2nd 2017, under the acting and later 26th GUM chairship of Henry Clément. He later resigned the post on the 24 September of that year.