From MicroWiki, the free micronational encyclopædia
(Redirected from San Dover)
Jump to navigation Jump to search

The Sovereign San Doverian Order, often shortened to San Dover or the Sovereign Order, is a stateless, sovereign, survivalist society that revolves around the San Doverian religion. San Dover is provisionally led by the long-time micronationalist Violette "Suzuki" Clingersmith, and is the intermicronationally recognized as one of the successor states to 2005's Drew Star Line. 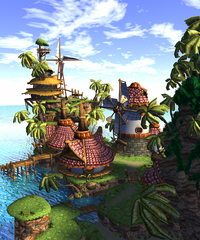 Sandover Village from the video game Jak and Daxter, for which the micronation of San Dover gets its name from.

San Dover gets its name from Sandover Village, the main hub in the 2001 Naughty Dog video game Jak and Daxter. The particles San and Dover were split apart to play upon the words' root meanings. San is a shortened version of the Spanish word "santo," which means both saint and holy. Dover derives from the Proto-Celtic word for water, "dubros." Thus, San Dover can be literally translated to mean "holy water." Water is an important aspect of the San Doverian religion, as the primary deity is a lunar and ocean goddess named "Neneveh."

San Dover can trace its earliest history to the formation of Drew Star Line in September 2005, the starting point of a vast series of micronations that are collectively referred to as the DSL Legacy, of which San Dover represents the only surviving micronational entity. San Dover itself came about in three separate iterations, each with its own national and societal aims. The first such iteration was the San Dover Queendom, an all-female/transwoman realm with a rigid political structure. The Queendom spun-off from the ashes of the Second Starland Republic in September 2013, only to quietly disappear nine months later.

The second iteration of San Dover was brought in to replace Sunþrawegaz as a state of Zenrax in October 2017, in order for Clingersmith to maintain her seat on the Zenraxian Senate. Coined as a Principality, the recreated San Dover eyed up islands for purchase around the world, but did little to advance these aims. By the end of 2017 Clingersmith was bored of the idea of mere sovereignty and wished to establish something similar to the Sovereign Military Order of Malta. She styled this new San Dover as a secular order with plans to preserve human history and culture, and proclaimed it as the Sovereign San Doverian Order of Historical Preservation. Despite the lofty goal very little was done to advance San Dover's aims at preserving history, and by January 2019, Clingersmith admitted that the Order had failed in its mission and officially shuttered it after months of inactivity.

The third and current iteration came about as Clingersmith began exploring new approaches into micronationalism through the first few months of 2019. After efforts to work with other prominent micronationalists, such as Shiro Mephistopheles and Nicholas Kaos, fell short of the goal of creating a new secessionist movement, Clingersmith decided to go back to working solo on a new micronation. In March 2019 she hit upon an idea of promoting the creation of new states within the United States, but wasn't sold on the viability of this project. By April she decided to return to her original micronational work prior to 2015, which was simply working on creating a sovereign state without putting pressure of places or times to do so. Several days of planning led to the unfurling of the third version of San Dover on 12 April.

The third iteration of San Dover opened its doors to the public on 25 April 2019, and was accepted as a provisional member of the Grand Unified Micronational on 28 April (confirmed as a full member on 19 May). Attempts to unionize with the micronations of Zenrax and Pacem began in earnest almost from the beginning, but the three sides mutually decided to abandon the proposed New Kermadec Union when it became clear that each micronation had varying and incompatible goals. A promise by Clingersmith to enact a representative government by 1 June also fell through because there was a lack of viable candidates to fill the proposed government. It is unclear when San Dover will democratize, however Clingersmith has proposed making the micronation a Democratia, essentially a direct democracy with an elected leader.

On 27 May, San Dover made its first land claims and announced the micronation's objectives for the next two decades. San Dover would attempt to partially control through the settlement of its citizens the Kerguelen Islands, Heard and McDonald Islands, Amsterdam and Saint Paul Islands, Crozet Islands, and the Prince Edward Islands, all by 13 September 2040 (the 35th anniversary of Drew Star Line's formation). These land claims are all sub-antarctic islands in the Southern Indian Ocean, and are currently controlled by the macronational governments of Australia, France, and South Africa. On 8 December, San Dover dropped all of these territorial claims in favor of becoming a stateless, sovereign society.

San Dover does not currently maintain a constitutional government. Rather it is provisionally led by Clingersmith until such a time as she feels the nation requires political oversight of San Dover's affairs. Some clues as to what a future government may look like have been made public, such as the continued talk of provincial representation in a parliament. San Dover does maintain several personal liberties to its citizens, among these being the right to safety, happiness, assembly, and free press. Clingersmith has the historic habit of asking everyday citizens of her micronations what path they would like to go down, and this practice has been applied to San Dover. San Dover was briefly divided into a hierarchical structure of provinces and commonwealths, but that practice was abandoned after the micronation abandoned statehood.

San Dover has one national holiday, Drew Star Line Day, celebrated every 13 September. It honours the creation of Drew Star Line, the forerunner of San Dover and the epicenter of the entire DSL Legacy series of micronations.

San Dover is de facto religious society that is primarily focused with the nature of time and space. The religion is founded upon several tenants of Quantum Theory, primarily that atomic particles can predict the future and record their place within time and space. This phenomena has led Clingersmith and her citizens to postulate that atoms inherently know where and when they will be at any given point in time and space, which San Doverians refer to as "causality." Because causality is believed to be unavoidable, San Doverians believe that free-will is non-existent. The San Doverian faith maintains that causality is simply nature's way of preventing the space-time continuum from unravelling and ending the universe. Thus life on Earth and elsewhere in the universe is something of a preordained afterthought stemming from casality's role in keeping space and time in union with one another.

Time and space are worshiped as deities in San Dover, known as Zhia (time) and Ellsmereh (space). Their relationship to one another is not unlike that of yin and yang, with Zhia representing the light side of the universe and Ellsmereh representing the universe's darker side. The two beings are typically represented as two snakes eating each other's tail, a symbology referred to as an double ouroboros that is found in many cultures around the world. A stylized version of this double ouroboros can be found in San Dover's flag, with the snakes wrapping around an infinity symbol. It is believed by San Doverians that Zhia and Ellsmereh were once one being, but were separated when the universe came into existence. Since their separation, they have been bound to one another in a constant battle, each one trying be rid of the other. This conflict is maintained to be the source of causality. Causality is not infinite, and it is believed by San Doverians that space-time will eventually rip itself apart when causality ends, and that time and space will one day move on separate plains of reality, similar to the Big Rip Theory.

Zhia is believed to be responsible for the creation of the physical matter, the solar system, and life. This because San Doverians maintain that time given time is simply evolution, and the evolution of matter creates stars, planets, and eventually life. Several aspects of the elemental universe, the nature of time and humanity's keeping of it, and cultural aspects of our species are represented by eight divinities: Neneveh, Gaia, Hameh, Blass, Aen, Lillon, Trun, and Sao. These beings are usually presented as human-like females, with long, pointed ears, sharp teeth and retractable claws. Their appearance is based upon a dream Clingersmith had in her youth, in which she met with the goddess Neneveh.