MicroWiki is the largest online encyclopædia about micronations, small and often rather eccentric nations that are unrecognised by the wider international community. The wiki is being continually improved and updated by 54,581 editors, with content being moderated by a small group of staff and funded by our generous Patrons. Since its creation on 27 May 2005, the site has grown to become the largest micronation-related website on the Internet, with a total of 181,974 pages and 34,853 articles, of which 113 have achieved good article status. Before you start editing, it is recommended that you take a look at our content disclaimer, basic rules of editing, and the nation page guide.

The flag of Xagħra (Maltese: Il-Bandiera tax-Xagħra), an incorporated, unorganised territory of the Democratic Christian Federation of Melite, is a rectangular bicolour with a field divided into white on the hoist, and red on the fly. It is based on the layout and proportions of the naval flag of Portugal between 1830 and 1910, and derives its colours from the flag of Malta. Designed by Melitian president, Matthew Tonna, it was instated as the flag of the Xagħra Territory upon its formalisation on 17 July 2022 by the Parliament of Melite. No physical flags bearing the design exist. (more...). 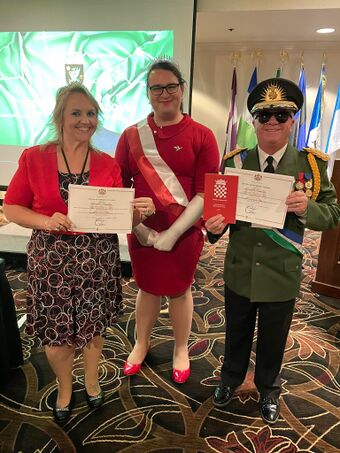 This month in history

Following the illegal “referendum” and annexation of Southern and Eastern Ukraine as well as the continuing Russian invasion of Ukraine, President Yaroslav Mar signed a Decree On impeding the malicious activity of the Russian Federation and implementing sanctions against Russian and Belarusian residents...

Dracul Regional Broadcast, LLC has teamed up with Dracul Channels 1, 2, and 13, to put together an internship program, aimed at teaching micronationalists proper journalism and TV station technology...

Hurricane Ian caused historic storm surge, flooding, winds, and rain on Wednesday afternoon, as it made landfall near Tampa, Florida. While many evacuated the area, others stayed behind with harsh consequences...

After a big period of inactivity which Adammia hasn’t seen since early 2017, the Empire is beginning to return to life, with senior officials hoping to address the lethargy which crippled the last scheduled election...

September 25th marks Dracul’s 5th birthday, with half a decade of success to be bragged about. The nation has been known for gaining attention since 2017, due to its professionalism and seriousness, especially in terms of government and military actions...

Draculians will once again this month find themselves in a (virtual) voting booth on Monday, as the Founder’s Committee of Dracul has proposed a new national flag, Great Seal, and Emblem...

Alongside much of the world, micronations across the globe are responding with sorrow as Her Majesty Queen Elizabeth II, Queen of the United Kingdom and the many Commonwealth realms, passed away aged 96 as one of the longest-serving heads of state in history. At home in Adammia, the Emperor has decreed that tomorrow (Friday the 9th) will be a day of national mourning...

Her Majesty Queen Elizabeth II has died after a reign of 70 years. Emperor Jonathan I has announced an Empire-wide state of mourning to last until the Queen’s funeral...