The term "micronationalist" was first used in a 1964 book on secessionist movements in Sub-Saharan Africa to denote a micronation, rather than an individual. Its first use in the context of a person was in a 1987 book on the same topic, and in 1997 it appeared in a post by Anthony Lawless on the Usenet forum alt.politics.micronations. This led to the term's wide usage on said forum, later spreading into common vocabulary among micronationalists all over Usenet. Since the mid- and late 2000s, with the rise of the Internet, the term became commonly accepted among micronationalists and non-micronationalists alike, including journalists.

The micronational community is decentralised, forming various communities and sectors around micronational spheres of influence or websites, such as MicroWiki and its associated Discord server, other wikis or social medias such as Facebook, Twitter, Reddit or YouTube. Geofictionists may call themselves micronationalists, however this is erroneous.

See also: History of micronationalism on the Internet

The term "micronationalist" was first used in a 1964 book on secessionist movements in Sub-Saharan Africa to denote a micronation[1] before the term "micronational" was widely established. This remained the common usage of the term in academics until the mid-2000s. Its first use to refer to a person involved with micronationalism appeared in a 1987 book, also on secessionist movements in Africa.[2] The term started to become in common use after it appeared in a post by Anthony Lawless on the Usenet forum alt.politics.micronations on 25 September 1997.[3] It was then widely adopted on said forum, and spread into common vocabulary among micronationalists on Usenet. Its use has since become the preferred term among micronationalists with the rise of the Internet, especially on websites such as MicroWiki, which was founded in 2005. In 2008, Colleen Mastony of the Chicago Tribune used the term to refer to Kevin Baugh,[4] expanding its usage among non-micronationalists.

Micronationalists can be of any age – from children to the elderly. According to the MicroWiki Discord Survey, conducted by Ned Gunderson on MicroWikia@Discord in May 2019, 94.4% of 54 respondents identified as male, and 40.7% were aged between 16–19 and 29.6% between 12–15. The 2019 MicroWiki General Survey by Zed found similar results. In contrast, communities on Facebook and Skype tend to be much older than members of the MicroWiki Sector, or, more specifically, members of MicroWiki@Discord. Not all micronationalists are human, with some micronations giving titles and offices to animals, usually a pet. 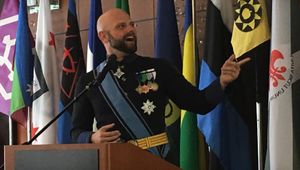 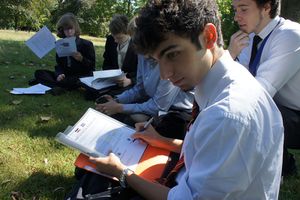 Furthermore, micronationalists also often combine micronationalism with other hobbies, especially politics, geography, history, economics, journalism and heraldry. Ives Blackwood, for instance, has written several theories and ideals relating to micropatriology and micronational economics. Micronations that have a democratic government, especially community micronations, usually act as political simulations, holding elections, parliament and debates. Journalists are also commonly found in the micronational community, especially in the MicroWiki Sector. St. Charlie, for example, had several journalists, and The St.Charlian Observer proved highly influential during its publication, being considered one of the greatest and most influential news publications in the MicroWiki Sector of the 2010s. Heraldry, and, in general, graphic design – particularly vexillology – is also a common interest in the sector.

(Left to right): Kevin Baugh of Molossia, Paddy Roy Bates of Sealand and Leonard Casley of Hutt River are micronationalists frequently regarded as the "modern founding fathers of micronationalism"

Kevin Baugh (b. 1962) of Molossia, Paddy Roy Bates (1921–2012) of Sealand and Leonard Casley (1925–2019) of Hutt River are often regarded as the "modern founding fathers of micronationalism". Other notable micronationalists include: