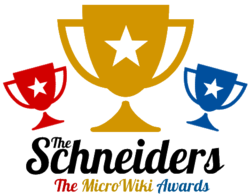 The logo for the Schneider Awards

The Schneider Awards were a set of MicroWiki community recognition awards created on 16 March 2011. Named after MicroWiki's creator, Fabian Maximilian Schneider (also known as Monsterfurby), and created by the now-disgraced administrator Aldrich Lucas, the awards were decided by a panel of five judges selected by the organiser, and consist of five main awards known as the Schneider Proper and numerous other minor awards.

The Schneider Awards were organised by Aldrich Lucas who suggested the idea in March 2011. The judging panel consisted of five veteran micronationalists chosen by Aldrich who convened to decide the recipients of each award from a group of nominees named by the community. The awards were inspired by FNORDs (Fantasy/Simulated Norton Awards) held in the Micras Sector which have been awarded annually since 2002. The categories were suggested by members of the community and the official categories were decided by Lucas on 19 March with the final results being announced on 12 April. Schneider himself - the namesake of the awards - is known to have opposed them, finding the idea of having categories which insulted the recipients (such as "Worst Troll") ridiculous, and not wanting to be associated with such a venture. It is also notable that then site owner and head admin Pierre d'Égtavie refused to be nominated. Aldrich Lucas recieved the most awards, obtaining three. The awards were revived in late 2012 as a biennual venture by Barnaby Hands, although they do not appear to have been active following 2013.

The other awards used during the first Schneider Awards are as follows: