Barnaby attends school with both the Dallin leader Ewan Whitmore, and Pambian president Edward Hunt. Jack Stables, a Senyan citizen also attends, as does Shane Mills, leader of the infamous Holy Empire of Guist, who had a war with Senya in early 2011. Hands was also noted for his videos during Yablokogate, and his message to stop the scandal was emphasised by Alexander Reinhardt and Marka Mejakhansk, who were responsible for the "Keep calm and carry on" YouTube video. 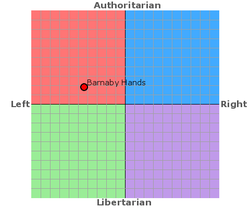 Barnaby Hands discovered micronationalism through another one of his passions, football. He was serching up non-FIFA football when he came across Principality of Sealand. He found out that it was a micronation and started to research about micronations. Telling only his friend Ewan, he was determined to make his own one. He decided to found a micronation called the Democratic Environmental Society of Senya. Barnaby has kept up his enthuisiasm for micronationalism by joining the 2013 MFA World Cup. He hopes to make the World a better place.

On the 7th December 2010, Barnaby Hands attempted to rig an admin election by creating many false accounts and making them all vote for him. A few nations which had been around on MicroWiki, such as West African USSR and the Monarch Islands. However, all of these sockpuppets were noticed by Parker I and confirmed by Aldrich Lucas to be sockpuppets.[1] Barnaby was banned indefinetly for his actions.

Hands released a total of two videos during Yablokogate, condemming both TASPAC and the GUM, and encouraging an end to the scandal by requesting everyone to "calm down".[2] His message was emphasised by Alexander Reinhardt, who was responsible for the "Keep calm and carry on" video together with Marka Mejakhansk.

On the other hand, however, Hands referred to the situation as "utter rubbish", eventually seeing Yabloko and Tiana as those who really sparked the conflict, and with Aldrich Lucas "not providing co-operation" between members. He also showed preoccupation over the current situation and encouraged the Community to eventually "get rid of those who cause problems". Yabloko nor Tiana replied to the accusations, and Hands' declarations were eventually seen as "too extreme". Crown Prince Jonathan of Austenasia commented on the video by saying that the crisis was not a real conflict, but rather an "issue regarding the suitability of some﻿ people for administration of a website".

In July 2012, Hands approved a bill to join the Micronational Cartography Society, and submitted a claim to Micras on 17 July 2012, which was accepted six days later.

Barnaby Hands is a Bolivarian, a form of socialism devolped in South America, which believes in democratic reforms instead of armed revolution. Other main points of Bolivarianism include;

On the 17th July 2011, Hands' party, the Senyan National Party, changed it's name to the Bolivarian Party of Senya.

Barnaby originally trained with Pakefield FC, but never got selected for their squad. He started club football when he moved to Norfolk.

Barnaby played seven games for Glebe. Of these seven, five were in the local Croydon Cup, and played a match against future employers Brancaster Primary A. He guided Glebe as captain to the semi-finals, were they lost on penalties to Saint George, who went on to win the tourenment. Hands was managed by his father. Glebe played a century match against Sandringham & West Newton, which they won 4-2. Barnaby scored his first ever career goal in this match, putting Glebe 2-1 up in the first half, by Crossing a ball in which no-one met and went rolling in. He quit Glebe in February 2007 due to home problems.

Barnaby joined Dersingham FC B in the summer of 2007, on recommendation from Khalifa Harmer, the vice-captain of the side at that time. Barnaby's debut was excellent, scoring his team's only goal against rivals Dersingham FC A in a 2-1 defeat. However, Barnaby had problems with the management in the team and left in 2008, only half-way through the season.

Barnaby played just six games for the Brancaster 'B' team. Competing five of the six matches in the Docking Cup, a competition where Brancaster 'B' lost 22-0 and 13-0, Barnaby always stood out along with friend Liam Roughton. In a match after the Docking Cup, Barnaby's side were 6-0 down, and very angry with the goalkeeper, Barnaby produced one of his most spectacular efforts on goal ever, taking a free-kick on a full sized pitch from mid-way inside his own half and hitting the post. Barnaby, along with Liam, were promoted to the First team for the following season.

Barnaby started playing for the Brancaster 'A' team at the beginning of the 2007-08 season. He played at Left Midfield in the best Brancaster team ever under the management of Mr. Martinez. Barnaby played thirty-one games for Brancaster A, scoring eleven goals in the process. This included two goals in a Norfolk Cup First Round match against Antingham & Southrepps, the only time Barnaby scored more than one goal in a game for a club team. However they lost that match 5-3. Hands was very mutch a part of an excellent Brancaster team, who won the Norfolk Small School League and Brancaster Festival Cup. Hands also played in his first ever match within a mile of Senya, playing on Senya's current ground against Great Witchingham Primary, scoring the winner. Barnaby, along with the majority of the team left after the season, most moving on to new clubs. Barnaby never re-signed, and became a free agent.

On November 3, 2011, Barnaby joined Walpole House, after his high school announced a Year 10 football competition. Hands played for Walpole, which was made up of players from the tutor groups of 10CRC & 10BOR. Hands debuted on November 4, 2011, in a 1-0 defeat to Nelson, with Tom Fisher scoring the only goal. Hands then played against Kett, coming on for Shane Mills halfway through the match. In the last minute, Hands took a corner, against his teamates will, but produced a poor cross, which signalled the end of the match and a 0-0 draw. Following the game, Walpole player Walters verbally asulted Hands, and the two were separated. Walpole finished bottom of the league with just one point.

Barnaby made his micronational footballing debut against the People's Republic of Pambia on the 6th May 2011. In that match he scored four goals.

Hands has also had some work making music. His first single, "Eke!", was produced for the Microvision Song Contest, became a hit for Senya. Hands has since gone on to perform with Austrian group PDF at Reepham Festival, featuring as a vocalist on their covers of Ich Rocke and Neon. In 2012 he co-wrote Norfolk rapper and dancer CRAKKERZ's song "Fattie (Easter Egg)". He has also previously worked with Norfolk EDM artist Miles Otto.