Cally Anna was the Senyavite (Head of State) of Democratic Environmental Society of Senya. She is actually a cat. 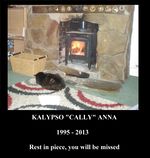 Cally Anna was born probably in 1995. Her first family were very cruel to animals and many people living near them were afraid to rescue her of fear of the family who owned her. In March 1996, she was discovered to be pregnant and was thrown out of her home. She was handed over to the charity Cat's Protection League (now Cat's Protection and sent to Gill Hands, a volunteer for the charity. In April 1996 she gave birth to a litter of 6. Of this, the Hands family only kept one, a Tabby Cat called Tiger Tim. The Hands' family could not give Cally to a new family because she kept running away when people visited to get a new pet. Gill decided that Cally could stay with them. In December 1996, Gill gave birth to her first son Barnaby Hands. She continued to keep cats until the birth of her second son. Cally grew up with Barnaby and son Tiger. After several house movements, The Hands family came to live at Glebe House School. Cally wondered around the school grounds, but the kids looked after her. In 2010, she was appointed Senyavite, and served until 13 January 2011, when Pav was elected into office. She went onto replace Pav again in later 2011, before being replaced by Frazer Porphyro in October 2012. Cally Anna died on 15 January 2013 at the age of 17, after becoming very ill and refusing to eat for a week. She was buried near Senya the following day.