Marka Berjan Mejakhansk (Irish: Marcas O'Miadhachain; born January 2, 1990) is a Nemkhav politician and retired military officer, currently the President of the Nemkhav Federation, Chancellor of Central Nemkhavia and Chair of the Federalist Party.

Widely accepted as the Founding Father of Nemkhavia, he has been the leader of the Nemkhav people since July 2009 and has been the head of the various Nemkhav States that have existed throughout history. Beginning as the original founder of the Imperial Republic of Nemkhavia in 2009, he has come to hold a firm place in the affairs of the MicroWiki Community.

Mejakhansk has been a mediating voice in micronational affairs for some time, often providing knowledge that he has gained through his extensive studies at third level in Universities in Ireland and in Germany. He has written many works critiquing society, both micro and macro, and is a staunch human rights supporter.

His political leanings are towards the left, and he has been a part of various left-wing political parties throughout his micronational time, including the Nemkhav People's Party, the League of Communists of Nemkhavia and the League of Liberal Leftists, the ruling party of the now-defunt Socialist Union. In recent years, in a trend more towards the centre right, he became a member of the National Party of St.Charlie.

In mid 2010, Mejakhansk was the centre of some controversy when it was discovered that all Nemkhav States that existed after the Imperial Republic were, as he put it, 'fantasy nations'. This came following the Dresner Revelations, and was met with mixed opinions in the community as a whole.

Mejakhansk's military career is also something of note, having served in both macro and micro-national armies. He was instrumental in the reforms of the A1 Defence Force when he served as its third General Officer Commanding. The ranks he has gained over time include Field Marshal, General and Lieutenant General, among others.

Mejakhansk was born in January 1990, in the Irish capital city of Dublin. During his schooling from 1995 to 2008, he showed promise in leadership and had a talent for organising those around him into effective groups. He was variously the head of teams and clubs, including leading an under-dog team to a shock victory during his secondary school time.

Mejakhank attended third-level education in Dublin, pursing a degree in European Studies. His final dissertation was on the subject of federalism in the European Union. 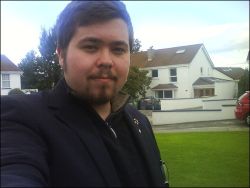 Marka Mejakhansk as Premier of the Imperial Republic, 2009

In July 2009, a year after he had begun his studies at third level, Mejakhansk came across the MicroWiki Community quite by accident. As it happened, he had been planning to create a wiki page where people could create their own nations and carry out diplomacy thus. To his surprise, one had already been made and he joined with his newly formed nation on July 31, 2009.

In the community, Mejakhansk was relatively unknown for quite some time. He carried out the affairs of his nation and kept a quiet observation on micronational affairs. Nemkhavia gradually became known, when Mejakhansk first formed a friendship with the then-leader of the Slinky Empyre, Kyng Fyrst. Towards the end of 2009, Mejakhansk came more to fore when he began what would be a long and controversial partnership with the person then known as Mark Dresner. Dresner's nation, Pristinia, became a part of Mejakhansk's left-wing Socialist Federal Republic of Nemkhavia and Autonomous President Dresner and President Mejakhansk became close confidants and political allies, with almost identical foreign policies.

Mejakhansk became known as the more reserved and patient partner in relation to the sometimes brash and outspoken Dresner. At several points, he had to answer for the latter's mistakes and presented a calm presence. Upon the creation of the Socialist Union of Nemkhavia and Pristinia, both of them became leaders of their respective nations within an equal partnership. The usual status quo of outspoken versus calm ensured that the SUNP, for the most part, had stable relations with other nations.

When the infamous Dresner Dossier was released, Mejakhask was left in an awkward position. In one move, he pulled Nemkhavia away from the SUNP, declaring independence as the Republic of Nemkhavia and saving it from the political disaster that became of the SUNP, as Dresner formed it into the United Federation of Socialist Micronations, which was destined to collapse soon after. After much time picking up the pieces of the shattered situation, Mejakhansk eventually regained his political standing with the Community and re-founded the SFR Nemkhavia, which was to exist for quite some time.

The next major issue to cross the Nemkhav leader was the revelation that the Nemkhav States between the end of the Imperial Republic (the Nemkhav Federation) and the end of the SFR Nemkhavia had all been fake nations, populated by creations that were analogous to characters in a debate. Mejakhansk's political standing was absolutely shot by this revelation, due to the prior issue of fake micronations arising with Erusia and Pristinia. Fake nations were not looked on kindly and Mejakhansk answered for it.

His career in ruins, Mejakhansk decided to take the reborn, smaller Nemkhavia with him into another nation and soon began his short time as Minister of Defence of the Most Glorious People's Republic of A1. With the rank of Lieutenant General, Mejakhansk took up the position as head of the A1 Defence Forces and would hold that position until late 2010, when he decided to bring Nemkhavia back to independence. He seceded from A1 in good spirits with his fomer leaders and created the Empire of Nemkhavia, which would be the Nemkhav State that thrived until the beginning of 2011, when Mejakhansk brought his experience to one of the most recognised and respected micronations in the entire community, the Republic of Egtavia. He would eventually take part in the so called January Revolution, which brought sweeping changes to Egtavia and returned it to higher levels of activity.

In mid 2011, Mejakhansk founded the Second Nemkhav Federation, ruling as its first, third and sixth President. Upon the restoration of the Federation in its third form in 2016, he assumed the Presidency once again and remains in office currently.

Outside of history and politics, Mejakhansk is also an experienced bass guitarist and has played with many bands over the years. He is also an avid writer, of both fiction and non-fiction.

Mejakhansk lives with his family in the Federation’s capital city, Astor Impora, where he carries out his day to day work. He is engaged and has two children, a daughter born in 2017 and a son born in 2021. He speaks competent German and basic Irish as well as his English, his German being honed during a year spent living abroad in Dresden, Germany.

The political beliefs held by Mejakhansk have moved from staunch socialism to moderate conservatism and back to social democracy. During the heyday of the left, Mejakhansk was an outspoken opponent of monarchism and a proponent of central planning in government. In the modern day, the once-King was a member of Nemkhavia's Conservative Party, before returning to the left with the rise of the Democratic Revolutionary Front and the Union of Nemkhav Communists. In the modern day, Mejakhansk advocates for social democracy.

Mejakhansk firmly believes in the right of peoples to self-determination and the curbing of government power where possible. He is a strong supporter of States' Rights within Nemkhavia, believing that the Federal Government should only be as powerful as it needs to be in order to effectively govern.

There can be no rule other than rule by the people

On 18 September 2010, the then Emperor appointed Mejakhansk a Knight Commander of the Austenasian Order.

On 31 December 2020, Mejakhansk was inducted into the Noble and Illustrious Order of Saint Marinus with the rank of Member by the President of the Commonwealth of New Virginia, Brooklyn Hewitt.

— Mejakhansk, speaking while Chairman of the Settlement Council

No man has the right to stand over another. All men and women are free and equal. No religious group, political party or ethnic minority is subordinate to any other. We are Nemkhavs. This we hold dear, we must not forget our duty to the other peoples of this world. Take the hand of the downtrodden, bring them up to you. Equality is perfection

Mejekhansk's full style is as follows