The A1 Defense Force (Abbreviated: A1DF; Indonesian: Angkatan Pertahanan A1) is the armed forces branch of the A1 Government. It is delegated the duties of protecting the nation from invasion and to ensure order throughout. With the establishment of Pontus, the two sections of the A1DF are the National Guard, the Pontus Defense Force and Military Intelligence. The Pontus forces operate only on the fictitious planet of Micras and only exist in real life as far as the real personal that operate it.

The A1DF was initially the 'A1 People's Militia' during the Pprit Revolution, and played a vital part in the Revolution. It was at the founding of A1 that conscription was introduced, requiring all citizens above and including the age of 16 to be enrolled into what was then called the 'Home Guard', essentially the reserve forces of the A1PM. This conscription policy is still in place to this day. Following this, the A1PM became largely an inactive force up until April 2009, when it was reorganized into three services:

In August 2009, the air force and navy were abolished due to "redundancy" reasons, and the A1 Home Guard created to provide for reserve personnel of the A1PA. During early 2010, the releasing of the 'A1DF Structure Recommendations Report' signaled an immediate radical overhaul of the A1DF, mainly in organisational structure.

In mid 2010, the A1 Defense Force came under the command of the newly-appointed Minister of Defense, and former macronational soldier, Lieutenant General Marka Mejakhansk. As the new General Officer Commanding, Mejakhansk continued upon the previous reforms and sought to outline the mission of the A1DF.

After November 2010, the MGPRA1 was reformed into the Federated Republics of A1. Shortly following this transition, the Nemkhavia left the FRA1 and therefore left the position of GOCA1DF open to appointment. The opening was then filled by James Wilary of Prsänëa. Within a few days, large reforms of the Defense force were created to improve its quality and ability. This included the abolishment of the Home Guard for size purposes, and the A1 People's Army was shortened to the A1 Army.

With the foundation of the Republic of Pontus, the A1 Army was expanded and the A1 Navy and A1 Air Force were revived to carry on the duties of the larger military required for the micronational sized fictional forces of the republic. During June, the A1 Civil Security Service was relieved of the A1 Security and Intelligence Service. The intelligence organization was subsequently delegated to the A1 Defense Force and remade into the A1 Military Intelligence branch. This brought the total number of A1 Defense Forces to four.

At the start of 2012, because of the lack of activity in the Air Force and Navy in the physical world, and because of the troubles in the Micras systems operating with non Micras, the three Pontus forces were reorganized into the Pontus Defense Force. What little physical forces were in the Navy and Air Force joined the real world forces of the Army in the single A1 National Guard. This allowed for the A1NG and A1MI, and the Pontus Army, Navy, and Air Force, to operate together in their own systems.

The Commander in Chief of the A1DF is constitutionally the First Secretary as the head of state of A1, but "real" command of the A1DF is vested in the General Officer Commanding (GOCA1DF). That position is currently held by AIRCM James Wilary of the Pontus Air Force. 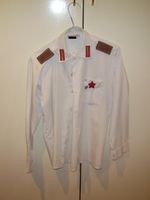 An A1 People's Army uniform with lieutenant-colonel and staff officer insignia.

A complete overhaul of the structure of the A1DF came in early 2010, with the entire structure being reorganized. A second reform came soon after the transition to the Federated Republics of A1, which involved the removal of excess parts of the A1DF. With the need for Pontus forces, the A1 Army, Navy and Air Force were structured to handle these new macronational sized forces. After the civil intelligence agency was abolished in favor of one ran by the A1 Defense Force, another branch, A1 Military Intelligence, was created.

The structure of the A1DF was slightly confusing, as the Defense forces of A1's Micras territory, the Republic of Pontus, and other republics were separated into two separate Defense forces. With another reform in January, 2012, these Micras Forces were placed in one larger Branch, the Pontus Defense Force, with physical forces being reorganized into the A1 National Guard.

As military service in the A1 Defense Force (or its reserves) is compulsory for all citizens residing in a Republic, the armed forces would constitute a large majority of the A1 population. However, because of recent inactivity, these measures have not been enforced, and so a smaller percentage of citizens are members of the A1DF.

The standard weapon for the A1 People's Army is the Wasserpistole (WP2), essentially water pistols. For artillery, much larger versions of the WP2 (GWP1 & GWP2) or Große Wasserpistole', are used. The A1PA is also fortunate in that it has a 'support battalion' to assist in other matters.

The standard aircraft of the A1AF is the FZ-10, although 3 other types of aircraft also equip the A1AF, these being the HK-09, HK-10 and FZ-08. All FZ units are paper planes, while all HK units are flying models.

Although the A1 Defense Force is well provided for in terms of numbers, its equipment is cheap, sometimes old and lacking in number. The National Guard uses paper and model aircraft for its air wings, so their air equipment is in the best condition and most numerous. The A1DF in its present form has only been involved in one conflict to date (the Great Patriotic War), and the A1 government's current policy dictates that it wants it to be kept that way.