The A1 Navy is a branch of the A1 Defence Force for exclusive use in A1's Micras territory. Thus, it does not exist in 'real life'. 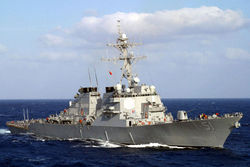 A destroyer of the Arleigh Burke Class

Currently, the A1 Navy has 41 vessels in operation.

The A1 Navy also has a small contingent of Marines to supplement naval operations. It is designed to be a fast-moving force for small-scale operations. Approximately one-half of the battalion is fully motorised, using A1SLAVs to achieve maximum mobility.

The Navy ceremonial uniform consists of:

The Navy combat uniform consists of: