Prsänëa (officially the Prsänëa People's Republic; abbreviated: PPR; Prsänëan: Repoovplicxh Vagapønatarë Persänëta) was the fifth republic formed in the Federated Republics of A1. It was historically a Socialist republic, as reflected by its name. The PPR was led by founder and Premier James Wilary, a long time supporter of A1. Prsänëa was usually semi inactive in local affairs, and the citizenry was mostly active in the Federal Government.

Prsänëan comes from the abbreviation of PrSR as seen in the first three letters: Prsänëan - PrSR. The rest of "Prsänëan" was carried over from "Rsainian", the RrSA demonym, which had been decided to be the best ending of the name and carries no specific meaning. The spelling of "ainian" at the end of "Rsainian" and "änëan" at the end of "Prsänëan" have the same sounds."Prsänëan" is pronounced as "per-sae-nee-an" and it is a common annoyance for it to be pronounced the same as "Persian", which is incorrect.

The Royal reformed States of America, the predecessor of the People's reformed States Republic and the Prsänëan People's Republic, was founded on May 1, 2009 the platform (which is still in place today) of being James Wilary's and others' protest against the activities of the US Government. Although, besides the existence and purpose of the RrSA and the PrSR, no anti-US policy has ever in place in the the nation.

For the begining of the RrSA, there was much activity. Mostly, this was to create the new nation and to get it up on its feet. A lot of this included countless forgotten royal decrees ordering the creation of buildings, the annexation of land and the creation of laws. This period is most famous for being when the origional Rights of People was created for the RrSA. The document is one of fifteen documents to survive from the monarchy and is considered the model of freedom and equality. The entire beginning period lasted about three to four months and ended in around mid August 2009.

From the end of the Beginning Period to the start of the Restoration in early February 2010, the Royal reformed States of America fell into a state of inactivity. This was from a lack of both intrest and things to do as most of the government had been designed and most anything to be decreed had already been decreed. The only recorded project is the slow and still incomplete construction of what was the Sparkle Memorial Capital Building in Georgetown, which was latter taken down due to a termite infestation. The idea of the nation had almost been abandoned before January 2010.

By early 2010, a period of available time came in which James Wilary, then King Wilary the First, decided it would be a good idea to restart the project of the RrSA. This involved mainly the recuitment of the old citizens of the monarchy and the restoration of the government structure. During this time, it was decided to expand the horizions of the RrSA and many of the projects for the rest of the monarchy's existence were come up with. Mainly was the idea to have the RrSA enter into foreign affairs, a major move that caused the most major changes and the end of the monarchy.

During February 2010, the Royal reformed Government decided to join the MicroWiki sector of micronationalism. Previous research had been made into the Leauge of Secessionist States for months before. The only items holding the RrSA back were the requirments of an Email and website of which the RrSA was not in a position to obtain. The Royal reformed States of America then came across the Micronation's Wiki during a search on the Internet of items related to micronations. After becoming interrested in joining the wiki, the debate went on to whether to join the Grand Unified Micronational or the Organisation of Active Micronations. The idea for the GUM was dismissed after the viewing of their constitution and the decision that the GUM was too hostile towards new members of the community. The idea for joing the OAM was decided on the 21st after the simple friendly structure appealed to the RrSA for its first area of intermicronationalism. An application was sent in shortly and the RrSA began its career in the MicroWiki sector and its surroundings on February 28, 2011 when the Royal reformed States of America were accepted into the Organisation of Active Micronations.

During the many months following the RrSA's joining of the OAM, the nation began to gain importantance in the affairs of the MicroWiki and was at its height the ninth most influential nation in the sector. During the many expeditions of the Royal States, the left sector of the Micronations Wiki began to appeal to the RrSA. In a major move, a political party was formed in the RrSA (the People's reformed Party) that helped push for the June 2010 reformation of the RrSA into the now socialist People's reformed States Republic. This transition from a monarchy to a leftist republic has continued since June 1, 2010 in the diffrent editions of the micronation.

On November 7, 2010, it was decided that the People's reformed States Republic be entered into the Federated Republics of A1 as one of its republics. The decision was made because the PrSR lacked much activity and needed to go in a diffrent route. The People's reformed States Repuic officially was adopted into the FRA1 as the Prsänëa People's Republic at 00:1 November 9, 2010. Currently, the PPR is an participating member of the federated republics. Citizens of the republic became high ranking officials in the FRA1. Since the admission of the PPR to the Federated Republics of A1, the internal affairs of the republic have been almost rendered nonexistant around its physical lands. Most activity in the republic went to the online aspect of the FRA1. However, videos have been commissioned to advertise the republic for showing to other republics of A1 to see.

The Prsänëa People's Republic made the decision to leave the Federated Republics of A1 on July 17, 2012. In a speech made by Premier James E Wilary, the decision was made due partially to the inactivity seen throughout the Republic because of the departure of Gordon Freeman. The other reason, which was emphasized more greatly, was that in the upcoming reforms of A1 that would allow the nation to reform and reorganize itself, Prsänëa feared that it would lose much of its historical identity as a "micronational entity".

Office of the Premier

The legal and justice system of Prsänëa was highly under developed. Generally, such a system was unrequired by the government as crime is unheard of. Also, the court system was provided by the federal government and the A1 Defence Force was generally held as the civil protection force in place of any police system. Such reasons are why a republic legal system was never established.

There was never an active economy in Prsänëa and money related issues were nonexistant. This was because of the rarity of monetary transactions in the republic and that the main purpose of its existance was a more political and fun organization then one based off of spending, profits, etc. The only uses of currency, with the Prsänëan Credit, and bullion in the PPR were mainly for entertainment purposes or to be used as simulations of treasury and financial government activities.

The physical features of Prsänëa greatly differed across the areas of the republic. The main homeland of the PPR in Georgetown, it was usually green and sunny. The commune tended to rain half the year and both plant and animal life is abundant on the small flat. In the other half of the PPR although, it was dry, hot and almost never rains. Inyo sustained a usual desert climate with few living creatures and was a tough place to live, especially since the majority of the land was made up of sand dunes. Because of these conditions, all the population liveed outside of this sector of Prsänëa. 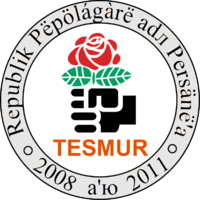 Reverse of the PPR Seal

Prsänëa lacked much cuture as a seperate republic because of its large local inactivity, and the little existing could be considered regular of any common Californian. Most, if not all, of the time spent with regional activities were military based. Therefore, personal ideas were unused and the cutural aspects of the citizens widely ignored. This was also caused by the small citizenship, limiting the influences for culture.

The only cultural diffrence about the PPR was the languages used in the republic. A wide range of Europeon languages (French, English and German) and the conlang of the Prsänëan people (Prsänëan) made Prsänëa one of the more diverse republics in the language sector.

All media for the republic was supplied and produced by the A1 News Service. There were a few stories written per month that involved the PPR and most were made by other republics' citizens. A line of videos discussing multiple topics about Prsänëa was being thought of and production would have started in early 2011. The PPR also wished to publish images and videos of James Wilary and other important items, as all communications previously out of the republic were written.