From MicroWiki, the free micronational encyclopædia
(Redirected from Quentin I of Wyvern)
Jump to navigation Jump to search

Quentin I of Wyvern is the current King of Wyvern, as well as a diplomat, politician and member of the Statenraad.

Quentin's parents are Prince A. of Wyvern (b. 1959) and Princess H. of Wyvern (b. 1959), both of whom reside in the Royal Palace in Vivernus, the capital city. Little is known about Prince A. of Wyvern's family history, although he is said to descend from Prussian refugees in the nineteenth century. Princess H. of Wyvern's distant ancestors include the medieval Lords of Arkel, various Frankish nobles and aristocrats including Charlemagnes, Charles Martel and Arnulf of Metz.

Quentin I of Wyvern was born in on the 19th of July, 1993 in a Dutch hospital. After some health issues, Quentin could finally be taken home to the current Royal Palace, by his parents a while later.

Around 1997, Quentin I of Wyvern started attending a Protestant Christian primary school near his house after speding two years attending a nursery school. At this primary school, he met Ossie of Behemoth, who started attending the school when he moved to the area around 2000. Around that time, Quentin also declared himself to be 'King Quentin', expressing no formal claims for a kingdom, and instead claiming to be king of the class and the school playground, supported by several classmates.

In 2004, Quentin graduated from primary school and went to a secondary school in The Hague. There, he met President Dirk of Grezhnia, a micronation described as being 'so obscure you have probably never heard of it'. In 2010, he attained a mid-level diploma and started work on his high-level diploma, allowing him into almost any Dutch university. 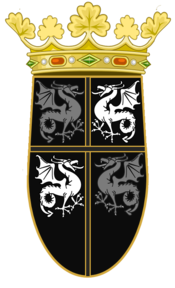 Founding of the Snake Knights

A few years after that, around 2004-2005, Quentin, T. of Marine and Ossie of Behemoth founded an informal organisation with no official claim, but a set of royal titles. Quentin and Ossie applied a system where T. of Marine, as well as any other members, were ranked well below them, with the difference in ranks remaining the same even during promotions. This was also the first time Quentin ever used the title of 'Emperor' in his title. Under the influence of Bradley of Dullahan, who met the three leaders of the organisation in February 2006, this organisation evolved into Snakia.

In 2006, the informal organisation transitioned into Snakia, often described by the government of Wyvern as a 'micronation before we knew what a micronation was'. At the time, Quentin believed his and Bradley's pet project to be unique; a country, with clear claims in the area surrounding the current Royal Palace, called Snakia. At first, before he brought in royal titles, Snakia was known simply as a 'country' with Quentin as its 'Leader'. However, Quentin decided he wanted to be, alternatively, King or Emperor of Snakia, and continually struggled for power with Bradley of Dullahan. Usually, Ossie of Behemoth would pick Quentin's side in conflicts to defeat Bradley.

As Snakia progressed, power struggles eventually settled down, and Quentin asserted his rule. After a 'golden age of Snakia' between the spring of 2006 and the autumn of 2007, in which Quentin presided over several cultural projects not matched even in modern-day Wyvern, Snakia became an inactive nation due to the weather, and Quentin abolished it at the start of 2008.

Fall of the Snake Knights, rise of the GSC

A short-lived successor, the Grave Stones Clan, claimed the same area, asserted its claim to the area through spreading a temporary logo with chalk, and was also led by Quentin. It became inactive quickly, and was considered 'over' by the end of 2008 until Quentin, once again, declared it over at the end of 2008.

Fall of Snakia and the rise of Wyvern

King Quentin I of Wyvern, as his title has been since provisional independence was declared on October 27, 2009, is known as Wyvern's first founding father. After looking for information about microstates for an unrelated purpose, he came across the Wikipedia article on micronations, and instantly recognised these as being very similar to Snakia and the unnamed territory claimed by the GSC. Along with Bradley of Dullahan and Ossie of Behemoth, he attended a ceremony in the evening of October 27, 2009, around 22:00, to declare Wyvern a micronation, with Quentin being the King and Ossie and Bradley being, temporarily, advisors.

After it became apparent that Bradley of Dullahan was too short-tempered to be Minister of Foreign Affairs and delegate to the Organisation of Active Micronations, King Quentin took these positions from the Duke of Dullahan, trading them for important internal positions such as Minister of Internal Affairs and Minister of Defence, titles still held by the Duke of Dullahan. Quentin retained his position as head of government until he was forced by election results and subsequent negotiations to appoint Bradley of Dullahan as Prime Minister. He did manage to retain during those negotiations the right to be High Judge.

As the Minister of Foreign Affairs, he is responsible for conducting Wyvern's foreign diplomatic contacts, as well as being responsible for drafting treaties when the government so desires. He is also the current Minister of Justice and Order, tasked with maintaining Wyvern's only prison in Fort Wyvern and controlling the army in rare arrest missions. Additionally, in what is described as a 'very interesting position', King Quentin I is tasked with the ministerial position of Royal Affairs, meaning he has political responsibility for the wellbeing of his own family. As a result of being head of state, laws carried out by him are usually signed by the head of government.

He is also a member of the Statenraad, Wyvern's legislature.

King Quentin I of Wyvern has also been granted several military positions over the course of several years.

These are titles granted to him by the Government of the Kingdom of Wyvern.

King of Kings refers to his position as the ultimate king in Wyvernian history, defeating various usurpers. King of Snakia is a title granted to him for his role in leading Snakia. Lord Protector and King of Sæ refers to his position as the micronational king of the Protectorate of Sæ, a protectorate of the Kingdom of Wyvern in the southwest of the Netherlands. King of Scotland was a title granted to him based on personal experiences; when he visited Scotland in 2006, he was often addressed with 'Your Majesty' by locals. Despite this, he does not claim to be the leader of Scotland, but rather claims the title as a 'souvenir title'. King of Terra Australis Incognita refers to his fascination with a suspected continent in the southern hemisphere that turned out not to exist. Emperor of Spitsbergen was a title suggested to him by some inhabitants of the Netherlands, who were discussing the time when the Netherlands occupied Spitsbergen. Protector of the Realm refers to his position as protector of his realm. Leader and First Knight of the Snake Knights refers to his leadership of the Snake Knights between 2006 and 2008.

King Quentin I can also use the titles of Knight, Baron, Count, Duke, Prince and Emperor, all titles granted to him by Ossie of Behemoth and Bradley of Dullahan between 2005 and 2006.

Emperor of the Romans (Holy Roman Emperor), King of Wyvern, King of Germany, Italy and Burgundy (Altes), King of the Franks and the Lombards, (Sovereign) Prince of Sae, Emperor of Spitsbergen, King of Terra Australis Incognita, Defender of the Faith and the Realm.

Titles in other languages