From MicroWiki, the free micronational encyclopædia
(Redirected from Bradley of Dullahan)
Jump to navigation Jump to search

His Serene & Imperial Highness Bradley, King of the Romans, commonly known by his long-held title of Bradley, Duke of Dullahan (born 1993) is a Wyvernian and Austenasian nobleman, politician, military officer and diplomatic representative. On 4 March 2022, he was elected King of the Romans in the Holy Roman Empire.

The Duke is known for his part in the Great Ideological Conflict, his critique of the OAM and his contribution to the Grand Unified Micronational. He is the founder of the Wyvernian Liberal Party and one of the most decorated nobles and military leaders in the Kingdom of Wyvern. Intermicronationally he also served as Vice Secretary-General of the Intermicronational Conservative Alliance, a title which made him a discussed figure throughout 2010, and Chairman, Acting-Chairman ,Vice-Chairman and Supreme Judge of the Grand Unified Micronational. The Duke was involved in the 2012-13 GUM leadership scandal.

The Duke of Dullahan is a controversial figure intermicronationally. He has been criticized internationally for his open criticism of Islam and anti-progressivism, but was praised by several members of the ICA for his disapproval of communism and socialism, notably by the Secundomian Conservative Party, and for supporting the Carolinian rebels during the Austenasian Civil War. The Duke is an outspoken critic of left-wing ideologies.

In May 2010, following the end of the Austenasian Civil War, Bradley was appointed a Companion of the Royal Carolinian Order which supposedly made him the most awarded military officer of the armed forces of Wyvern. The Duke was made a Cardinal of Orly on 7 January 2013, after which he was immediately appointed the ninth Pope of the Proto-Cults by King Declan I, taking the papal name of Alexander III, a position he held until 10 February later that year. On 3 July 2015 he was appointed to the Papacy a second time. On 29 July 2015 he issued the encyclical "Qui sine peccato" regarding the issue of judgment. 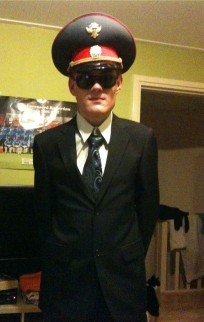