The Wyvernian Liberal Party is a political party in Wyvern, it was created by Bradley of Dullahan. It currently is the major coalition party and holds the prime-minister seat.

The Wyvernian Liberal Party was founded by Prime-Minister Bradley of Dullahan, a Senator of the Kingdom of Wyvern. The party has always been controversial because of its actions, but officially stands for freedom, equality and responsibility. It is the second most popular party in Wyvern, its founder Bradley of Dullahan being one of the founders of the Kingdom of Wyvern and author of a former version of the constitution. Out of four seats in the Senate, the Wyvernian Liberal Party holds one.

In the begining, Senator Bradley identified himself with conservatism, mostly on integration and law enforcement. He was a outspoken neoconservative and believed that the american wars were a good thing.

During the creation of Wyvern, Bradley created this party to stand for the solidarity and saftey and promoting a free market economy, change should come slowly and not radical.

After discovering his more liberal side, Bradley changed his one-man party into the Conservative Liberal Party. This party would promote Law & Order Liberalism, freedom but a strong police force and a strong army with harsh and long sentinces and punishments for those who broke the laws. His integration policies remained the same.

Although the party transformed into a more liberal party and losing the conservative part, party never could think of a good new name, this is why the party remained active for so long. The name change was proposed on a party convention to lose the conservative mark on the party as they wanted to be identified as liberals rather then conservatives.

After Zealandia's Deputy first-minister left the ZDF wich had fallen due to all its member leaving because its mission was complete. Bradley created the Liberal People's Party in Zealandia and soon took the name and used it on the Conservative-Liberal Party too, this mainly to lose the conservative part. Though the name was afteral not liked by the chairman and its voters so it was eventualy changed back.

After talks with Christian conservatives it was time to break away from conservatism. Borrowing the Wyvernian from the Wyvernian Socialist Monarchist party, Bradley created the Wyvernian Liberal Party and its first new work was the new party manifesto wich is always based or is Dullahanism.

The party made Conservative-liberalism the third ideology of the party rather then the first one. Now the party aims for classical liberalism and economic liberalism.

The new message of the party is; Freedom, democracy, responcibillity.

The Wyvernian Liberal Party believes in the freedom of the individual,it wants to protect each individual but leave it alone as much as possible so that it may florrish on its one, as that is where liberalism stands for, ultimatly the individual knows whats best for it self.

The Wyvernian Liberal Party sees that the negative liberties that were given to the state should be returned to the individual, though it understands that not all can be given back, wich would lead to damaging the freedom of others. There for the party has decided to only give some of the negative liberties back such as; the unlimited freedom of speech, expression. The party says that such things as discrimination and racism are not allowed by the vallues of the nations and because of that the state shouldnt ban it, as inforcing it is realy hard and that society will deal with the problem by its self, it doesnt need the government.

Internationalization, Federations, confederations are things the Wyvernian Liberal Party doesnt want to participate in, this is because of its belief that the freedom and liberty of the people cant be guerteed when other will decide over the Wyvernian people. 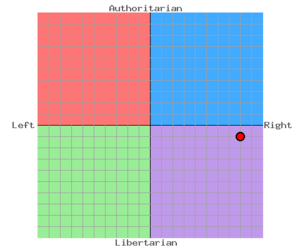 The first poster of the new party, it gives a clear liberal message against collectivism. 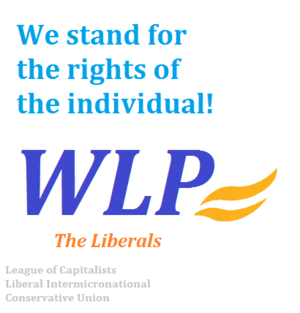 The party is a member of the Liberal InterMicronational and of the Conservative Union and the League of Capitalists.