Statistic-Dime (SD) — colloquially spelled without the hyphen or erroneously capitalised "DIME",[1] and officially The Statistic-Dime Company — is an intermicronational non-profit private company headquartered in New Yera, Australis. Its primary business is creating and running surveys, indices, awards, electoral opinion polls, standardisations and other developmental projects, spread across Statistic-Dime's three components; Dime, Roscoe Statistics, and Statistic-Fire, although for simplicity's sake nearly every public project has been labelled as being solely under Statistic-Dime.[2]

Founded as a New Eiffelic organisation headquartered in New Leeds by entrepreneur Zabëlle Skye from the merger of Statistic-Fire and DIME in October 2019, the company began to grow exponentially.[2] Its public opinion as well as influence continued to see rapid growth throughout 2020, with a number of new records being set for the company, such as largest voter participation for the second MicroWiki General Survey.[3] Following New Eiffel's dissolution in November 2020, the company had no national backing. In December, the company was incorporated as an Australissian organisation and incorporated Roscoe Statistics, and Smith appointed Daniel Hamilton as CEO and left the organisation to commence his break from the micronational community.

Statistic-Dime's projects include Microcode — the largest standardisation for two-letter country codes[4] — the highly publicised Micronationalist of the Month and Year awards, and Project Micronation. It also created the MicroWiki's 25 Most Influential for 2020 list, with another edition planned for the year 2021. Statistic-Dime's largest surveys, the GUM Member States Positivity Survey, MicroWiki's Top 25 and annual LGBT Rights Indices and MicroWiki General Surveys have received critical acclaim, and totalled over 200 responses. Statistic-Dime has also previously worked with Jayden Lycon from Curio Publications on DIME Magazine and the Dime-Curio Micronational Organisation Poll, though the latter was met with criticism.[5]

Zabëlle Skye founded both Statistic-Fire and Dime, stylised as "DIME", on 8 October 2018 and 31 January 2019 respectively. The latter as an independent, New Eiffelic government-funded institution to cover data of considerable importance, acting as a New Eiffelic company register, for which it publicly stored general data such as administrative and financial data, and the former company as an intermicronational New Eiffelic registered company with the sole purpose of publishing the Micronationalist of the Month award.[6] By February 2019, Statistic-Fire expanded into intermicronational projects, like indices, a development classification and later surveys, from the controversial Micronational Popularity Index in March to the critically acclaimed 2019 LGBT Rights Index in August. Anthony Dickson and Jeremy Kyaber, who primarily worked with Statistic-Fire's Microcode, were influential in the company's developments, though both would have quit by September. Smith, whom was now the sole employee of both companies, wanted to keep all his intermicronational projects in one place, and merged them to form Statistic-Dime on 21 October 2019.[7]

By November 2019, Microcode, which previously had plans for expansion, was largely neglected,[4] as was Project Micronation, with Smith bringing much of his focus on surveys and Micronationalist of the Month, which would see huge growth in 2020 to become a highly publicised event, with doubled voter participation. The MicroWiki General Survey, conducted in November 2019 was received positively and had 34 respondents.[8] In late December 2019, Statistic-Dime partnered with Curio Publications' Jayden Lycon to jointly create DIME Magazine, which announced 2019's Micronationalist of the Year.[9] The two would later conduct the Dime-Curio Micronational Organisation Poll in March 2020, but it was largely unpopular among critics because of an observational error due to its low turnout and the way it was advertised.[5] Statistic-Dime saw more success with the critically acclaimed surveys the 2020 LGBT Rights Index with 34 respondents in May, GUM Member States Positivity Survey with 40 respondents in July,[10] and second MicroWiki General Survey in November, which became Static-Dime's largest survey with a participation of 63 respondents.[3] Following New Eiffel's dissolution in November, the company had no national backing. 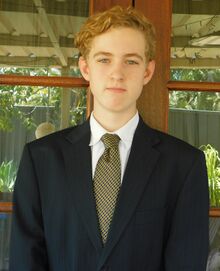 Smith had announced his break from the micronational community in July, which would include stepping down for his position as CEO, and in September he began looking for who to appoint as his successor to the company.[2] He originally proposed creating a council of members from the organisation TOES, which much to their delight were fond of the idea and gladly accepted, and preposterous for the transition began. After Smith trialed some members of TOES members with aiding him on picking candidates for Micronationalist of the Month, he was unimpressed with their performance, and instead announced he would be appointing Daniel Hamilton, owner of Roscoe Statistics, as CEO. TOES was unhappy with the decision, who were erroneously under the impression that they were already official staff, and they "resigned" after Hamilton announced Statistic-Dime would be organising a 20th MicroWiki Influence Survey.[11] The survey was later terminated following their backlash.

The transition, which was reportedly unorganised and hasty,[11] was completed on 2 December, and Hamilton was officially named CEO. On the same day, Roscoe Statistics was officially incorporated into Statistic-Dime, and Statistic-Dime became an Australisian organisation. Hamilton's first project as CEO was overseeing the list of MicroWiki's 25 Most Influential for 2020 released on the same day, which had began development by Smith in early November, who by then had de facto fully left the company, holding no official positions.[12] Although it had garnered less attention than Smith had hoped, it was largely positively received.[13] Hamilton has hugely developed Microcode, purging over two-hundred inactive codes, and, conversely to Smith, whom had worked alone, Hamilton has so far employed six micronationalists to work at the company, one of them being Lycon.[14]

Hamilton resigned from his position as CEO in December 2021, following a long period of inactivity within the company.

In December 2021, Liam Alexander was appointed as CEO following Hamilton's resignation, and initially presided over a burst of activity and expansion, during which Carson Snyder was awarded the Micronationalist of the Year Award for 2021.

Statistic-Dime experienced a period of instability during Black February under Alexander's tenure, during which board members Andrew Creed and Christina Nowell resigned due to conflict regarding the handling of the Black February situation by the MicroWiki@Discord administration, which Creed led at the time. Alexander later stated that the resigned members would not be welcome at Statistic-Dime anymore.

The Micronationalist of the Month award was not awarded during Alexander's tenure as CEO.

On 10 January 2023, Alexander resigned following several months of inactivity, and the return of Hamilton to the micronational community after a year-long absence. Alexander appointed Hamilton as CEO on the same day. 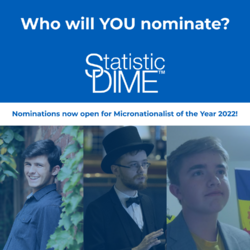 An advertisement for the 2022 Micronationalist of the Year Award, featuring the past three recipients: Carson Snyder, Adam Belcher, and Nicholas Randouler.

Upon being reinstated as CEO, Hamilton promised to return the company to its former prestige within the micronational community, and announced that the Micronationalist of the Year Award would continue for 2022, with the 2023 edition dependent on the success of the 2022 edition. In addition, Hamilton has announced that several former surveys will continue, and new surveys will be created.

Micronationalist of the Month, conducted monthly

Microcode (MC), or alternatively MicroCode, is the largest two-letter micronational code standard. It was originally developed on 16 April 2019 by Anthony Dickson, Jeremy Kyaber and Zabëlle Skye from Statistic-Fire with the purpose of easily marking micronations. Both Dickson and Kyaber had left the project by July. By November 2019, Microcode, which previously had plans for expansion, became largely neglected,[4] with Smith bringing much of his focus on surveys and Micronationalist of the Month. Hamilton has so far hugely developed Microcode, purging over two-hundred inactive codes, and has assigned a lot more.[14]

Micronationalist of the Month, commonly abbreviated DMM, MM or MotM, is a monthly award that features and honours a micronationalist (or a group, idea, fictional character, etc.) whom, the voters or the Dime committee (if a candidate is unopposed) deem the most influential of that month.[6] It primarily represents the MicroWiki Sector. Since it was awarded in January 2019, it steadily grew into a highly anticipated and publicised event.[20][21] The award ceased being awarded following March 2021, due to growing concerns that the award was turning into more of a popularity contest than a serious award.

Main article: Micronationalist of the Year

A spin-off of Micronationalist of the Month, it announces the "most influential" micronationalist of that year. In late December 2019, Statistic-Dime partnered with Curio Publications' Jayden Lycon to jointly create DIME Magazine, which announced 2019's Micronationalist of the Year after a public poll commenced.[9] The 2020 winner, however, was announced in the MicroWiki's 25 Most Influential for 2020, also created by Statistic-Dime, where he was ranked first.[12] The 2019 winner was Adam I, Emperor of Adammia for his work as Chair of the GUM, and the 2020 winner was Nicholas Randouler, as a memoriam to him and his career.

The company has had and has a large amount of leadership, formerly with only a CEO and more recently an added Statistic-Dime Council, sometimes referred to the Board of Directors of the company.[7]