The Monarchy of Adammia is the collective term for the Head of State of the Empire of Adammia, their Consort, the Imperial Family, and the political bodies directly associated with them. 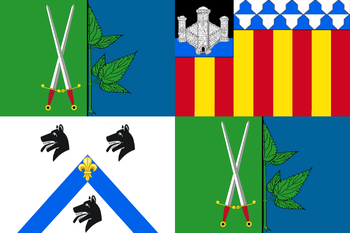 Under the Supreme Directive, the Monarch is the Head of State of the Empire of Adammia. They bear the title of Emperor/Empress, the style of His/Her Imperial Majesty and the secondary title of Imperator Adammiae. Numerous powers are invested in the Monarch, both from the Supreme Directive and from various Acts of Council and Imperial Decrees. They are seen as an embodiment of the state, and as the supreme source of authority. Since the position of Monarch was established in the Supreme Directive on 19 April 2013, the only occupant of this position has been Emperor Adam I.

The title of Consort was established by Imperial Decree XVI on 28 October 2013. It was intended to be reserved for the Monarch's romantic (unmarried) partner, known as a Prince Consort if male and a Princess Consort if female, and bearing the style of His/Her Illustrious Highness. It was created in the unlikely chance that a romantic endeavour being undertaken by the Emperor at the time was successful; the said endeavour failed, and the position was left vacant until 3 March 2014, when Madam Sydney Saindon, a close friend of the Emperor, was granted the title by Imperial Decree XXII, despite the lack of a romantic relationship between the two. After they drifted apart in late 2014, Decree XXXI declared the position vacant on 11 January 2015.

Another theoretical member of the Imperial Family would be the Monarch's spouse, who due to a quirk in legislation would be known as the Empress if female, but Prince Consort if male.

All three areas of the Imperial Estate have leased sections to various government departments and agencies, companies, political parties and sports associations.

The Emperor's current preferred symbol of the Monarchy is the top hat. A top hat is worn by Emperor Adam in nearly all of his micronational activities, and it has been likened to a crown (indeed, on the original Adammic Coat of Arms before the design was replaced by that of Emmanuel Tsompanoglou, there was a top hat where the crown would normally be). During her time as Princess Consort, Madam Sydney Saindon also acquired a (much more expensive) top hat to reflect this, further reinforcing the status of the top hat as a symbol of the Monarchy. Emperor Adam I's full imperial regalia consists of a tuxedo, a top hat, and a cane which acts as a sceptre. Occasions on which the Emperor wears his full regalia include Foundation Day, the State Opening of Council, the Emperor's Fabulous Quiz and the Insomnia World Famous Pub Quiz. He may wear a more casual variation of this, featuring jeans and a more casual shirt, during ordinary meetings of the Ruling Council. He will also rarely wear a suit, with a standard black necktie, such as when recording the Emperor's Christmas Broadcast.

In December 2019, the Monarchy adopted an official Imperial Standard for the first time. It consists of the national coat of arms in the first and fourth quarters, the arms of Belcher of Pontefract in the second quarter, and the arms of Hall of Wakefield in the third quarter.

Office of the Emperor

The Office of the Emperor is an executive and legislative body which exercises the various powers granted by the Monarch's different roles. The Office of the Emperor exercises the roles of Head of State, Chair of the Ruling Council, Judge of the Grand Court, Sovereign of the Order of Adammia, and Grand Marshal of the Military of Adammia. Since 2020, it has operated from Asquith House in Turing, Lagentia.

The staff within the Office of the Emperor can be broadly divided into two parts: an advisory wing, led by the Chief Advisor, and an operational wing, led by the Private Secretary. The Chief Advisor and the Private Secretary are considered equivalent in rank, although the Chief Advisor is a much older position. The staff who have been appointed within the Office by the Monarch usually fill nominally ceremonial roles and are rarely called upon. The services of the Office's staff are nominally available to the Cabinet Office as the latter lacks an equivalent team of its own, but in practice the executive government rarely makes use of this.

The Monarch has a massive range of executive and legislative powers in Adammia.

Under the Supreme Directive, the Emperor can:

Imperial Decrees have given several more specific powers to the Emperor:

Finally, some powers have been granted to the Monarch by Acts of Parliament:

Unofficially, the Emperor represents the nation in the intermicronational community, and as such, the current Emperor acts as Adammia's delegate to the Grand Unified Micronational.

Per Article VII Section 5 of the Supreme Directive, the Monarchy is hereditary and uses absolute primogeniture. At the present, Emperor Adam I has no descendants, and two younger siblings: the Heir to the throne, Crown Prince Daniel, and the second-in-line, Prince Jake. After siblings, uncles and aunts are next in line, first on the paternal side, followed by the maternal side (this means that the succession is not perfectly gender-neutral). Ordinarily, it is impossible for the succession to travel directly upwards, that is to say, to the Monarch's parents or grandparents. However, technically it is possible for such a person to inherit the throne if it is first inherited by the Monarch's uncle or aunt, and then passes to the former Monarch's parent as the sibling of the new Monarch; however, this only works if the parent has not already been Monarch before.