The Skirmish of Tytannia was a small struggle that took place in Tytannia, Empire of Adammia, on 5 May 2013. It was the first time the Military of Adammia had seen action.

Most weekends, citizens of the Empire including the Adammic Army's Western Regiment gather in Tytannia province, and the soldiers will sometimes carry out training during these meetings in summer. On 5 May 2013, they were using both plastic swords and fake guns during their practice. The Foster family (which included Matthew, one of the three soldiers) were present in the East Adammia region where Tytannia is located, as were some of the Royal Family.

In the governor's residence in Tytannia, the Emperor was discussing affairs, both micronational and personal, with the Emperor Mother Jayne and two others. Meanwhile, Adammic Army members Prince Jake and Matthew Foster were training in the adjoining garden area, where James Foster, a citizen with autism, was also present. Around mid-afternoon, Prince Jake informed the Emperor that Matthew was 'dead' after James had begun to intefere with the training. Complaining that "I didn't authorise this," Emperor Adam left the governor's residence to deal with the situation. 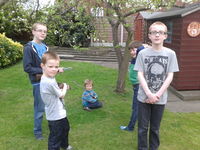 One of the photographs taken by the Emperor Mother.

In between the two trees in Tytannia, Matthew was faking injury. James stood near him holding one of the plastic swords, and had presumably attacked the young soldier with it. Once Matthew had 'recovered', he threated his brother with the other remaining sword, whilst Prince Jake pretended to provide backup with a toy gun. Adam ordered both sides to stand down, but James, having a greatly lowered mental age compared to his actual age due to his autism, sat down instead. The army retreated and he became very upset, but when the Emperor approached him, he grabbed the sword again and charged at the Army. Half-hearted fighting ensued until Crown Prince Daniel (a pacifist), the Duke of the Province, arrived on the scene. He demanded to know what was going on, and the Emperor merely told him that the army was simply training and that James had intefered. Soon after, the Emperor Mother Jayne arrived and inexplicably took two photographs of the group.

Once the two civilians had left the battlefield, the situation began to escalate. James had now taken one of the toy rifles and, in a startling feat of strength, hit it against the ground with such force that the barrel almost broke completely off. The Emperor quickly took the rifle into Sapientia where Duchess Winifred was able to provide sellotape to repair it.

The fighting continued as James continued to steal various weapons and use them to attack both the Army and the local scenery, hitting herbs in a plant pot numerous times with a sword. The fighting only ended when Jake and Matthew went to Sapientia to use the Hall family's computer, and James went to an unknown location in the same province.

Very little happened following the battle. The Emperor returned the weapons to their storage location in Sapientia, and excused the rogue citizen for his crimes based on his low mental age that meant he had little knowledge of the consequences of his actions.