The Adammic Express is the official state newspaper and a government-owned company of the Empire of Adammia.

The Adammic Express is named after the Daily Express, a right-wing British newspaper which is popular in Maternia and Tytannia for its crossword puzzles (it is, however, worth noting that this does not reflect the political views of the majority of the Adammic populace or the Adammic Express itself, both of which are generally neutral). 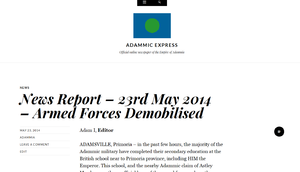 The blog which is now used by the Adammic Express was first created by Emperor Adam I on 16 April 2013, a mere 3 days after the Empire was founded. Its earliest news report was published on the 19th of that month, and was about the ratification of the original Supreme Directive by Sir Alex of Poole.

On 23 June 2013, Imperial Decree VI declared the blog at empireofadammia.wordpress.com as the official state newspaper of the Empire and named it the Adammic Express. It was owned at this time by the Monarchy. Even when the administration of the Express was handed over to the newly-formed Ministry of Culture by the Government Ministries Act 2013, the Monarchy continued to own the newspaper, until the Legislative Amendments Act 2013 was passed in December 2013. Adam I continued to be the Editor of the Express, but it formally became owned by the Ministry of Culture when the Government Bodies and Postal Service Act 2014 was passed in March 2014.

Over the following three years, despite still being supposed to be weekly, Adammic Express articles became less and less regular, eventually reaching less than one per month. In January 2015, the Express launched its monthly physical edition to be sold in Imperial City. This allowed the company to begin generating profits for the first time, which were forwarded directly to the Treasury. However, the physical edition also became infrequent. By March 2017, high levels of inactivity meant that the online version of the Express was effectively on hiatus, whilst physical editions continued to be produced.

In July 2017, the Adammic Express rebooted its online operations, redesigning its website. The format was changed from nominally weekly summary articles to shorter, more frequent articles relating to specific stories. 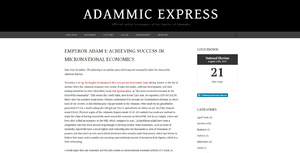 The homepage of the Adammic Express since July 2017.

The Adammic Express covers political, business, cultural and local news from around the Empire of Adammia. Traditionally, the Adammic Express conducts interviews with all National Election candidates a few days before polling day. These interviews were once notorious for their vague answers, although they have become more detailed in recent years. Occasionally, the Adammic Express has published opinion pieces, although these are generally very rare. To date, all of the content written for the Express has been written by its Editor, Emperor Adam I.

The news articles on the Adammic Express are generally well-received and have gained several compliments by other micronationalists. It has been considered one of the defining aspects of the Empire on the intermicronational stage.

The Adammic Express usually publishes an article for April Fools Day, which is a national holiday in Adammia. More than a simple prank, these articles often serve as satire of Adammia's politics and culture, the micronational community, and/or macronational politics.