His Majesty's Imperial Treasury, often referred to as the Treasury of Adammia, is a government agency in the Empire of Adammia which acts as the official store of the Imperial Government's financial assets. The physical box that contains these funds is found in White Gold Palace, Imperial City.

The agency is jointly managed by HG Sir Reginald Hall, the official Treasurer, and HIM Emperor Adam I. As of October 2019, the Treasury contains £59. 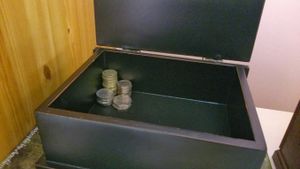 The Treasury is one of the oldest government bodies in Adammia, being originally established as the Treasury of Adammia on 26 April 2013, less than two weeks after the Empire was founded. Originally, it was located on the Command Desk in the Office of the Emperor, Primoria, and was managed completely by the Emperor. At this time, it contained little more than £2. Only poor records were kept of the income and expenditure.