April Fools' Day hoaxes are perpetrated by members of the MicroWiki community every year. Individual micronations often play jokes, and all eyes are on MicroWiki itself every year when the MicroWiki administrators usually play a joke on the community.

MicroWiki did not do anything for April Fools this year.

The main page's language was changed to "gnome speak", and there were various images of gnomes on the site. 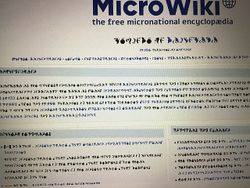 A screenshot of MicroWiki main page on April Fools' Day 2020

The language of the entirety of MicroWiki was changed to an unreadable font called Precursor Alpha Font, and the MicroWiki logo in the corner was slightly titled sideways, for a wacky appearance.[18] This change gained notable criticism from MicroWiki users since it was on every wiki page, coupled with the font couldn't be changed without third party plugins.[19] 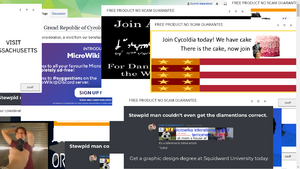 Large adverts blocking the view of content popped up on most pages approximately every minute. Some adverts promoted supposedly "advertisement-free" versions of MicroWiki, or promoted micronations and micronational political campaigns. Others served no purpose other than to annoy. One advertisement jokingly included "MicroWiki Premium", which included both an ad-free experience as well as "access to #suggestions" on the server MicroWiki@Discord, however as per the fine print, anyone who signed up would become the "legal spouse and property" of fictional character Papa Lazarou.

The article also reported the creation of the "Ministry of Justice" which was intedned "...to provide for the common domestic defense of the integrity of the Gradonian state and of the people…and to pursue and enforce the equality of each Gradonian in every metric". The first reported project of the Ministry was ‘Direction Effemination and Emasculation’, which was reported to create more Tomboys and Femboys in Gradonia, however was beset with setbacks due to lack of licensed medical practitioners and funds to pay for French Maid costumes.

Another reaction was by the Commonwealth of Dracul, who released a statement on their twitter account stating: "Dracul is currently monitoring the situation unfolding in Gradonia, as communists have taken control of the government, leading to King William abdicating the throne".

The Grand Republic of Cycoldia released a statement as well on twitter saying, "The Cycoldian Government is currently observing the situation unfolding in @SGradonia in which William I has been ousted by communists, the Grandeur Print is expected to report on this later today"

Great Emperor Eshaan I allegedly renamed his empire to the Blakonire Ya Empire. It should be reverted by 2 April.

Flag of the Grand and Amazing Kingdom of Sna

Flag of the Socialist Human Republic of Friendmitra

Charles stepped down from the throne on April 1st, 2021 and left the Ela'r'oech Discord Server, giving ownership to Anthony - a friendly rival - for the server. He claimed it was not a joke and also had allegedly allowed Ela'r'oech to be annexed by Alaria. It is unknown whether or not if this is a joke.

As you all may know that this is not sudden and was being planned for a long time. In a late night deliberation with HM Jayden I and other officers of the State, it has been decided that he shall abdicate and that in order to replace him in the affairs of the state, a junta government shall be established.

With immediate effect, the powers of the King and Queen shall be removed and they shall be an ordinary citizens of the state. The junta government shall be administered under my leadership as Senior Chairman of the State Council and be assisted by my junior officers including the Duke of Christophus and the Duchess of Bernardus who shall be the Deputy Chair of the State Council.

The State Council further approves the renaming of the nation to "Most Glorious State of Novus Hierosolymis" and that the abdicated King be a prisoner for his abuse of power during his reign. The State Council has also implemented a ban on public speech, human rights and other fundamental rights and violation of the ban could lead to serious punishment and problems. All are asked to be loyal to the Council and its members.

Further updates will be provided soon.

Ribbon for Roselian Annexation of Pinang

Special Broadcast from the Government of the Federation of Roselia

The Federation of Roselia has annexed the Discord server of Pinang.

Then Chandrachur I gave a speech to the general Pinangese people.

All fellow Pinangese citizens, Our brave army has easily routed the weak defence of the metaverse-filled, online nation of Pinang and has conquered it. Today I will mention our plans.

1. We will give independence to Larvotto.

2. Pinang will be a part of the Roseliwealth Realm with Chandrachur I as King of the Pinangese (similar to Queen Elizabeth II or King Felipe VI),

3. I create a commemorative ribbon called the Ribbon for Roselian Annexation of Pinang, in which I award:-

f) All other ministers of the Joshua Cabinet

With this, I end my speech.

A news article was made by David Brooke:-

On April First of 2022, Pinang was invaded by a right wing terrorist organisation, knows as the Roselian Nationalistt Front. The terrorist leader, in hopes of securing more territory, sent Larvottan forces to the Pinangese border, and quickly routed the unarmed and ineffective military.

The Princess announces the lifting of all sanctions against J. K. Rowling, a citizen of the United Kingdom of Great Britain and Northern Ireland, and appoints her as ambassador to the country.

Anthony I announced the adoption of the nation's full name as the Saspeariard Empire.

Web archives of the main page in which every April Fool's occurred. All archives are on the Wayback Machine