Based on the composition of members, the Cupertino Alliance can trace its lineage to the Independent Economical Union, a group of nations attempting to "protect the freedom of economy". After the decline of the Independent Economical Union in January 2019, the Epic Union was founded on 10 March 2019, originally to parody the Grand Unified Micronational. Inspired by the Epic Union, the Cupertino Alliance would be founded originally on 1 April 2019 with the membership of the new alliance being Aenderia, Misberia, Bepistan, Cloverzem, Groponigën, and Matachewan. However this rendition would eventually fall into inactivity as well, as was dissolved on 1 June 2019. Eventually, a bill was proposed to the House of Commons of Aenderia to reopen the Cupertino Alliance which was passed, reopening the alliance on 28 January 2020.[5]

The Cupertino Alliance was named simultaneously with Point Cupertino, Aenderia after Cupertino, California following a suggestion by Jayden Lycon. The name Cupertino first became widely used for the place in California when John T. Doyle, a San Francisco lawyer and historian, named his winery on McClellan Road Cupertino. After the turn of the 20th century, Cupertino displaced the former name for the region, which was West Side. The winery and its region, what became the City of Cupertino, was named after Arroyo San José de Cupertino (now Stevens Creek). The creek had been named by Spanish explorer Juan Bautista de Anza's cartographer, who named it after Saint Joseph of Cupertino (Italian:Guiseppe da Copertino), born Giuseppe Maria Desa and later named after the town of Copertino in the Kingdom of Naples, where he was born. The town was founded supposedly in 924 AD, originally named Citadella, then Conventino, Cupertino, and finally Copertino with the originating meaning a place of convening.

During the creation of the alliance, various names were suggested. Some suggestions were satirical, being parodies of the name of the Grand Unified Micronational, while William Efton decided to call it "Project Esperanza" for the time being.[6][7] The current name, "Cupertino Alliance," was suggested by Jayden Lycon. Efton, who at the time was an Apple fan, liked the suggestion.[8][9] Apple has been headquartered in Cupertino, California since 1977.[10]

As neither Lycon and Efton lived near the city of Cupertino (living in Toronto[11] and Austin[12] respectively), Efton suggested to claim a plot of land and name it "Point Cupertino".[13] This was later given assent from both the House of Commons of Aenderia[14] and by then-president Milaw Oakforrest.[15] The name was retained during the 2020 revival of the alliance.

The Independent Economical Union was founded on 20 October 2018 by Piotr Harniakiewicz. With the first members being Nerdystan, Matachewan and Aenderia. During the eventual decline of the Independent Economical Union, the Epic Union was founded on 10 March 2019 by Jayden Lycon as a way to parody the Grand Unified Micronational due to the perceived exclusivity seen by Lycon. This union would eventually grow into an idea for a new organization which would be the Cupertino Alliance. 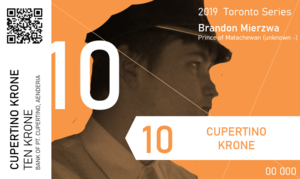 The 10 Cupertino Krone note, featuring Brandon Mierzwa, a now defunct project from the original rendition of the Cupertino Alliance.

On 1 April 2019, the Cupertino Alliance was founded, with the initial members of the first phase of the alliance being Aenderia, Misberia, Bepistan, Cloverzem, Groponigën, and Matachewan.

During the first phase, the alliance developed multiple agreements, including a Schengen-type visa-free travel agreement,[16] a unified banknote[17] and a defence treaty.[18] Furthermore, the alliance also resolved treaties between nation-states, including a conflict between Auvenum and Bepistan regarding the partition of White Island[19] and an extensive research study regarding a proposed bill in Groponigën regarding the Christchurch mosque shootings.[20]

With the anti-GUM sentiment in Aenderia stronger than ever, talks to reopen the Cupertino Alliance were presented to the House of Commons of Aenderia. The plan was to reopen the alliance by 28 January 2020, with the first meeting commencing on 1 February.[5] The act passed, and Efton invited Ponderosa Hills, Millania, and Misberia to the reopened alliance.[23] The following weeks saw the passing of many agreements, including the Windhoek Agreement[24] and the admission of Aenopia and Orientia on 24 February.[25] Also, the Alliance started the development of Cupertino Guides, revived the Informative Template Project, and started the development of a new site.

Logo of the 69 Hour Session. 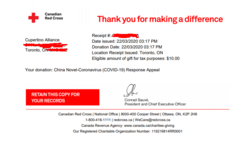 From 14 March 2020 till 17 March, the Cupertino Alliance held its first 69 Hour Session, with all delegates participating in a session to donate to the Canadian Red Cross.[26][27][28] During the session, controversy over the Cupertino Alliance's anthem prompted Aenderia to begin to withdraw from the alliance due to the informality. Aenderia requested a report showing how the alliance has attempted becoming more formal was made.[29][30] These requirements were later completed,[31] and on 5 April, an agreement was signed and ratified by both parties which suspended the withdrawal process.[32][33]

Cupertino Alliance's video election graphics were the first in the community and were first used in the 2020 Ponderosa Hills general election.

Following the incident regarding the 69 Hour Session, the Alliance became more formal. Sessions were improving with the Parliamentary Practice act, programs were being completed, and general interest grew in the CA.

On 30 March 2020, the Cupertino Reference Centre opened on Discord[34] and TinyCat on 13 April.[35][36] Three days later, Millania rejoined the Alliance.[33][37] This followed both the admission of Caddia, Huasgurd, Wegmat, and Patchogue, all were admitted a couple days earlier. On 16 April 2020, the long-awaited Cupertino Earth Week Clean Up was postponed indefinitely at the advice of both Toronto Public Health and Public Health England due to COVID-19.[38][39]

On 18 April 2020, the Millanian delegate notified regarding an incident in Kayutsastan regarding independence. The Cupertino Alliance, alongside others, provided peacekeeping support and eventually got in touch with Tom Kap, the leader of the movement. Kap, Lycon, and Millan later attended a negotiation session, where the rebels surrendered and allowed Kayutsasan to rejoin Millania in return for full amnesty in Millania, a new serene republican government in Kayutsasan as well as other bargaining points.

On 7 May 2020, the Cupertino Electoral Supervisory Commission's Nintendo 64 electorial video graphics was released with the 2020 Ponderosa Hills election, becoming the first video election graphics in the community and replacing Canadian Broadcasting Corperation.[40][41] This received praise from not only member nations but as well as others who praised it on being very professional and official.[42][43] 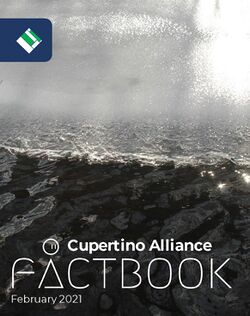 The Cupertino Alliance Factbook was finished on 14 February 2021.

On 8 May 2020, the Cupertino Alliance, as well as others, attended a constitutional convention in Hausgurd Union of the Crowns and drafted a new constitution based on the current Aenderian Constitution Act, 2020.[44][45] Later, New Port was dismissed from the Alliance due to the dissolution of the country.[46]

A Prime Minister (later Lieutenant Chair) position was established on 25 July 2020,[49] with Otto Gillespie Birch winning the office.[50] On 1 August 2020, the first Cupertino Alliance chair election was conducted between Lycon and Valentinus, with Lycon winning 11-2, and 1 abstain.

A surge in demand for membership applications in August 2020 resulted in applications taking more time as the Division of Membership Attainment was backed up, paving the way to the Membership (Reorganization) Act, which abolished the infamous 25 member cap as well as changed the process of membership, including requiring all applicants to go through an observer phase. The Regional Sessions Act was also passed during this time, creating the special ministry called regional ministries, allowing certain ministers to host sessions at times inconvenient to the Chair. The first European / African auxiliary session was held on 20 September 2020 at 3PM UTC or 11AM EDT while the first Asian / Oceanian auxiliary session was held on 25 September 2020 at 10AM UTC or 6AM EDT.

In early September, Sertor Valentinus was temporarily dismissed, marking a new way on how the alliance treated raiding incidents. Valentinus was later reinstated after multiple assessments and changes. A cabinet shuffle was done from late September to October 2020 as a result of various cabinet ministers retiring from the community.

During the month of November, the period was marked with increased session length and session frequency. The month also saw a revival of various projects including the Cupertino Guide and Factbook by the Lycon government, intended to be finished near or after his resignation. 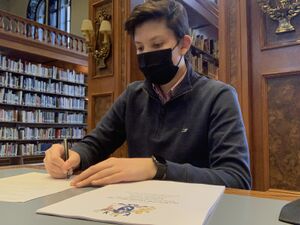 The post-Lycon era commenced when Simon Reeve, the second Lieutenant Chair of the Alliance under Chairman Jayden Lycon was declared winner of the 2nd Cupertino Alliance chairmanship election in January 2021, later being inaugurated on 15 February 2021. Elected with the goals of program activity and GUM cooperation, the term started poorly, with the administration reaching a threat of a motion of no confidence for inactivity.

Work on the Cupertino Guide from last administration reached a milestone on May 2021 with the competition of Chapter 2, which later sparked tensions between the Grand Unified Micronational's GUM Guides. The tensions mainly consisted of MicroWiki's "license" to the GUM to host their own guides service.

In August 2021, Dhrubajyoti Roy was declared winner of the 3rd Cupertino Alliance chairmanship election. During his chairmanship, MicroNear, an application that lists micronations, was acquired following the approval of an act of Parliament on 2 November of the same year.[51] 3 days following the acquisition, however, Roy would resign as Chair following a motion of no confidence being put forward by delegates; he would be replaced by Tyler Mullins.

Upon becoming Chair, Tyler Mullins was faced with a relatively disjointed alliance, split between supporting Roy and supporting those who put forward the motion of no confidence. Through the leadership of Mullins, a return to a much calmer and united alliance became present. Still, the State of Vishwamitra would withdraw from the alliance, alongside the Revalian Kingdom and the Kingdom of Burdette.

On 28 December 2021, during preparations for the Chair election Mullins released a statement that he would not be seeking another term.[52] The election would end with Carson Snyder being declared the winner, gaining 73.1% of the vote, and the next day, on 31 January 2022, Snyder would take office ending the Mullins administration.

Currently, the Cupertino Alliance Parliament is in its 6th Parliament.[a]

Chair of the Cupertino Alliance

The Chair of the Cupertino Alliance is elected following the provisions of Chapter 6 of the Charter of the Cupertino Alliance, 2021. Elections occur twice a year in January and July and conclude on the last Tuesday of the month. Bids for election are open from four weeks till two weeks before the voting period begins. A period for campaigning is also set aside, beginning three weeks before the start of the voting period. The election as a whole is ran by members of the Superior Court. After the ending of the three day voting period, which ends on the last Tuesday of the month, the winner is declared by the Superior Court, who takes office the last day of the month.

The current Superior Judge is Sertor Valentinus and the Associate Justices are Tim Landa and Phillip Joseph Pillin.

Ministers are appointed by the Chair, after taking office the appointment is discussed in parliament and then either confirmed to the position or are recalled. If a minister is recalled, they can not reappointed for twenty-eight days. While the Chair can also appoint deputy ministers, ministers can also appoint deputies to the ministry they are presiding over. Appointed deputy ministers must go through the same approval process as ministers. 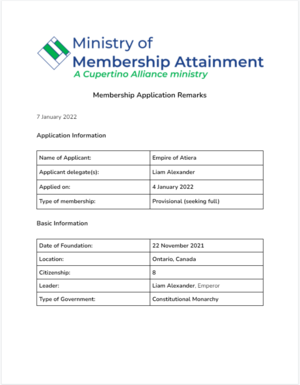 An example of modern remarks produced by the Ministry of Membership Attainment on the Second Empire of Atiera.

If an observer wants to seek member status, they can shift their membership to that of a provisional member, if they have been in good standing in the Cupertino Alliance for at least ninety days and if they meet the requirements to hold provisional membership, by petition of the Chair.

Provisional members are micronations that are seeking to become full nations. To become a provisional member, they must submit an application to the Ministry of Membership Attainment, who will then create a set of remarks, a document with information about the applying nation to be presented to parliament. After three readings of the remarks in parliament, parliament will vote on the application.

Bold indicates Chair of the Board