The Empire of Lurdentania, also known as Lurdentania, is a self-declared sovereign state, though more commonly referred to as a micronation by external observers. Lurdentania was established on 4 October 2018 by Rory I, who is also its current monarch and claims land within the macronation of Australia.

Throughout Lurdentanian History, many notable events have occurred including the 2 year anniversary celebrations, which occurred at the Imperial Palace, through to the most recent civil war, fought between loyalist Lurdentanian and opposing outsiders. Other notable historical achievements made by the nation include the first election, which saw continuous campaigning and rivalry, alongside the 1st meeting of the House of Commons in November 2018 and as far as the participating in a National Sport Championship which saw competitive domestic athletes compete for medals across sports such as swimming, running, relays, shotput and even discuss.

Lurdentania is a Constitutional Monarchy with a Unicameral legislature, composed of the House of Commons.

The Cabinet of Lurdentania is the main decision-making body of the Lurdentanian Government. Headed by the Prime Minister, the Cabinet is composed of 15 ministries. The Ministries are lead by there corresponding Minister. Currently the cabinet is made up of 3 Equity Party Members, 1 conservative party member and 1 opposition member. The incumbent ministry, was formed on the 1st sitting of the 7th Parliament of the Nation. The Sitting announced the first ever use of opposition members within a governments cabinet. The current government coalition holds a super Majority in the House of Commons, with 5/9 members of the House being a member of the governing coalition.

The Ministry of Finance is the largest economic controlling organization in the Government. The Ministry of Finance is responsible for the three separate organs of National Monetary. The first being the Imperial Treasury, available and implemented for the Imperial Family based off donations, the second organ is the National Lurdentanian Bank, the general funds used by the government for projects which are for the betterment of citizens and the distribution of notes and coins, and the Aid Fund, based off donations and available to Lurdentanian Citizens who require additional financial support.

The Lurdentanian Ministry of Agriculture and Environment is a large player in the Lurdentanian 2021 Environmental Initiative. The Lurdentanian A&E Ministry has been responsible for the Myrth Beach Cleanup, regional beach cleanups and recycling campaigns which occurred throughout 2021 as an effort for Lurdentania to maintain its rich and unique environmental culture. Lurdentania has one of the most beautiful Micronational Landscapes which are contributing to Lurdentanias Natural Beauty. The Ministry for A&E is committed to its preservation and protection, which was seen with the Launch of the Lurdentanian Rangers Corps, a corps of environmental police type personnel employed to protect the environment from possible unwanted human impact. The LRC was launched in 2019, however inactive until its revamp in July 2021 under new leadership.

Lurdentania also has a number of other ministries which overlook a range of topics from state security, to trade and immigration. All the ministries play an important role in the development of Lurdentania.

Speaker of the House

The Speaker of the House, a position elected at the beginning of the opening of a new parliament, is a position in which moderates, administrates and runs the sittings of the House.

The House of Commons

The Senate, as decreed through the Senate Act, 2022, was a solution to the "Single house gave majority parties absolute power" problem, instituting a 6 seat upperhouse which uses the Australian Senate Election system. The senate is currently in the 2nd Lurdentanian Senatorial Chamber Phase.

The Judiciary Branch is the smallest branch of the three. The Judicial Branch consists of the Lurdentanian Supreme Judge, His Imperial Majesty the Emperor, alongside the Supreme Magistrate HIH Matthew I, Deputy Supreme Magistrate Katrina and Regional Tribunal Judge Harrison. They make up the sole part of the court system. The courts main jobs are to ensure law enforcement, decide penalties for breaking the law, concluding criminal, corruption, political and economic related cases and bringing verdicts on undecided matters of the nation. The Judiciary branch of the Lurdentanian government see's minimal action, with a mere 4 cases recorded in the past 9 months.

There are currently four official political parties within Lurdentania. The Equity Party of Lurdentania is the current governing party, who currently have 5 seats within the House of Commons and 3 of the 5 Cabinet Ministers. The Liberal Party is the main opposition party, being a center-right party, similar to that of the Australian Liberal Party. The Liberal Party has 3 seats in the House and 1 of the Cabinet Ministers. The 7th Parliament is the first time that, whilst still in opposition, the Liberal Party have had ministers in the cabinet. The second coalition party is the Conservative Party, consisting of Right Wing policies, with 1 member in the House of Commons and 1 Cabinet Minister. The Equity-Conservative Coalition has existed since the third parliament. The Greens currently have 1 seat in the House of Commons, and no cabinet ministers. Whilst the Leftist alliance, since it hasn’t been around long enough to contest in any elections, they have no seats.

The Lurdentanian Armed Forces are commanded by the Commander in Chief, Rory I, and the General staff lead by the Monarch. The armed forces were involved in the 1st Battle of Seaspray.

The Lurdentanian Armed Forces are exceptionally advanced. Many camps and meetings are held between army officials.

Chief of the Defence Forces: His Imperial Highness Prince Matthew I 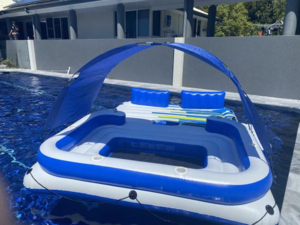 HIMS Dysart parked in the Myrth Naval base. The HIMS Dysart is the main ship in the 1st Naval Fleet.

The Navy is the second of the Lurdentanian Armed Forces. The Navy controls all body of waters in Lurdentania and is responsible for water defense and offence as well as water law enforcement. The navy is lead by the Admiralty. The Commander of the Navy is Fleet Admiral Lady Rubi, who is also the commander of the HIMS Dysart. The other second member of the Admiralty is Admiral Franklin, the Naval adviser to the Military High Command and the Emperor. The navy consists of 6 personnel.

Lord High Admiralty of Lurdentania: HIM Emperor Rory I

The army is the main defense branch of the Armed Forces. The army has an advanced unit structure, which allows for cohesive defensive operations. The army is against conflict, however is armed to defend against foreign unfriendly forces. The Primary duty of the Army is a ceremonial force involved in Imperial protection and parades on special events. The army is commanded by the Army Chief of Staff, His Imperial Highness Prince Matthew I of Terentia, General of the Lurdentanian Armed Forces. He is assisted by the Deputy Chief of Staff, Lord Kaydan, Colonel of the Army.

The Lurdentanian army is comprised of many different units, specialized to location and under the command of a wide range of Military officers and NCO. The Lurdentanian Military unit Composition is as follows:

The Lurdentanian Army, in total consists of 56 personnel

The Lurdentanian Army primarily focuses on ceremonial duties and field activities, however has been mobilized on two occasions. Once at the Lurdentanian Civil War and once on the Siege of Fort Roy. The Lurdentanian Civil war was a conflict fought over two days. The entire Lurdentanian Army was deployed, to defend Fort Roy and ultimately the Imperial Palace against invading foreign and domestic rebels. The civil war, whilst tedious and long, resulted in a Government Victory. No major casualties were obtained during the civil war, except for a rolled ankle which was caused during a Rebel rush on Fort Roy. The Siege of Fort Roy occured against a local communist Micronation, attempting to attack Fort Roy. The attack lasted a mere hour and was repelled by the 1st Western Myrth Regiment. Lurdentania is against war in any sorts, however will use its army in defensive duties only. It is against Military policy to deploy the army in efforts to harm another nation or people. The Army also is against the use of lethal weapons which could cause serious injury.

The GSD is responsible for the general law enforcement of the Empire. Local Police Stations are manned by GSD personnel who man, administrate and coordinate police electorates. Currently their are three police stations in the Empire:

The SSD is responsible for special operations and missions in the name of law enforcement. The SSD are deployed to high risk matters and are usually the best equipped/trained branch of the organization. The SSD is located in a singular HQ in Hazartica:

In 2020, Lurdentania held the National Sports Championships, which was attended by domestic athletes representing many Lurdentanian towns. Athletes competed for medals in their respective races and duked it out over the top prize. Multiple different sport related events were contested including swimming, running, relays, shotput, discuss, javelin and fencing. Alongside the Lurdentanian National Sports Championships, the Myrth Soccer Tournament occurred in Early 2021, led by Lady Rubi, a successful local Myrth Based event attended by nearly 10 participants, saw an intense and enjoyable soccer game. The Myrth Lions defeated the Myrth Dolphins 18 to 15.

The Lurdentanian Motorsport Championships (LMC), took place in early 2021, as a government thanks for the continuous loyalty and obedience in the Lurdentanian covid-19 lockdown. The LMC was competed by 5 participants, who raced a number of motorized vehicles. The gold medal was awarded to Lord Kaydan, and the Silver medal to HIH Prince Matthew. The games was played over a four hour period, with the Prime Minister and Deputy Prime Minister present and viewing from the makeshift grand stand. Other notable dignitaries were spotted in the crowd including Lord Kevin, Viscount of Lachtoria and Lord Fry, Baron of Lachtoria.

Lurdentania is full of unique vegetation and is home to over 250 different fruit trees. Alongside lush vegetation, the nation also consists of multiple bodies of water. Significant geographical features such as hills and beaches and is home to unique birds and wildlife. Lurdentania had experienced multiple cyclones. These cyclones have, on occasions brought significant damage to the property and environment of the Nation. In response to a small cyclone which saw the devastation of a Forest, the Ministry of Natural Disasters and Emergency Management was formed, however has not been active since August 2020. 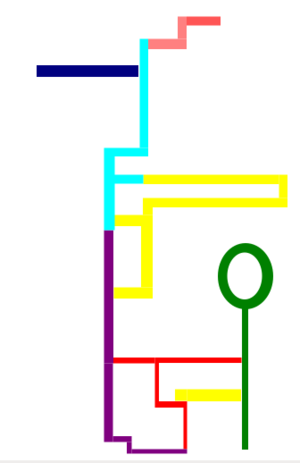 Lurdentania has many roads systems which link the capital together. The roads within the capital cross into Myrth, Grendenten Gardens, Smartslin and Terentia. The roads stretch accross the capital, linking the main Australian road to many landmarks including the Imperial Palace, Myrth Beach, Lake Rendoria, Lake Cameron and Fort Roy. The Road system around Myrth Consists of multiple Highways, roads, lanes and one boulevard. Roads are established/named through decreed and are usually named after significant events/monuments or people in that area. The only road which has residential housing is Myrth Highway.

The Empire of Lurdentania has an effective Bus system which drives passengers across the road systems of Myrth, Grendenten Gardens, Smartslin and Terentia. The two buses circulate on a rotational system. Bus A010 covers Myrth Highway, Dusty Court, Rendoria Road and Smartslin Highway on Saturday mornings and Sunday Afternoons. Bus A011 covers Windelbourne Road, Bush lane, O'brien Highway and Myrth Beach Boulevard on Saturday Afternoons and Sunday Mornings. Bus stops provide bus timetables for citizens. All transportation systems within Lurdentania are completely free to citizens, upon showing their Lurdentanian ID. The System was first introduced by the 3rd Katrina Ministry, however services were limited to Myrth Highway, and considered obsolete. The program became dormant until the 5th Katrina Ministry, which saw the revitalization of the program. Currently, Bus A010 is an old Mine bus, previously used for transporting coal miners and rehabilitated as an 11 person travel bus. Bus A011 is a multiuse 'buggy' also used by the Myrth Infantry Division.