Hausgurd Union of the Crowns

The Hausgurd Union of the Crowns (commonly shortened to Hausgurd or H.U.C) is a micronation composed of three non-contiguous enclaves located in the macronational entities of England, Portugal and Australia. It was founded by HIM Muchnieg I and several others on 16 March 2020.

The Union currently operates under a system of Elective Federated Constitutional Monarchy, with HIM Muchnieg I, the first and currently only Emperor holding supreme power, advised and assisted by the Imperial Council.

On 31 March 2020, Hausgurd was admitted to the Cupertino Alliance.[2][3] Hausgurd celebrated the first month of independence on 16 April 2020, changing the orefectures for provinces and 22 days later on 6 May 2020, drafted a new constitution which was written by the constitutional convention.[4] The convention comprised of the Emperor and the Imperial Electors, as well as Jayden Lycon from the Cupertino Alliance, T̂û Krīyēītêr (AERS), and Zecheriah O'Hair. On 23 May 2020, Hausgurd joined the Union of AERS Recognising Micronations (YĀRM) and on 31 May 2020 the Official Languages and Scripts Act,[5] fully recognising the Alternate English Romanisation System, a more phonetic method of writing the English language, which was invented and popularised within the nation by T̂û Krīyēītêr (AERS).

On 29 July 2020, Jayden Lycon attended a summit with the Kingdom of Humberlea as part of the Cupertino Alliance, the Union was given the opportunity to submit a treaty for physical signature by the Humberlean Representative. Jayden Lycon signed on behalf of the nation, with authority delegated to him to do so by the Emperor. To serve as an interim measure until the completion of the Constitution, the Emperor formed the provisional council which would serve as a subordinate to the Imperial Council. The Council was fairly active, passing several pieces of new legislation,[6] and admitting a new administrative division, the Duchy of Aldosia, to the Union. The Constitution[7] was finished on 22 October 2020, and was brought into force almost a month later on 21 November 2020. 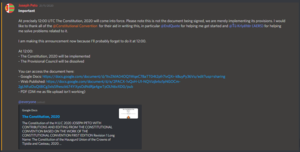 Joseph Peto announces the bringing into force of the nation's new constitution on the national Discord server.

The Union was founded with three original Provinces, the third of which left in April 2020, and was replaced by a Duchy several months later,[8] for a total of three administrative divisions within the Union. 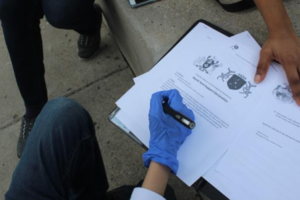 Nicholas Lokin signing the Treaty between the Hausgurd Union of the Crowns and the Kingdom of Humberlea.[c]

Currently, the Union recognizes six states and maintains its membership to the Cupertino Alliance, The MCUK of the Global Micronational Council and formerly ComSov, before is dissolution. Currently, only one of the treaties of mutual recognition (that with the Kingdom of Humberlea) has been physically signed by both parties involved (see image).

Macronationally, the Union is located in Portugal, Dronfield, England and Queensland, Australia.