From MicroWiki, the free micronational encyclopædia
Jump to navigation Jump to search
Not to be confused with Nacre.

The Cupertino Gazette is the official newspaper of the Cupertino Alliance. It was first published on 1 February 2020, the same day in which the first meeting of the Alliance was conducted. Originally, it only included proposals voted upon in the most recent Cupertino Parliament session, but has since expanded to include project updates, statements by the Chair, and various other information related to the governance of the Alliance. As the Cupertino Alliance does not have a major social media presence, the Gazette is most often the only way for the public to find new acts, proposals, and members.

The Cupertino Gazette is published 3 – 6 days after the latest session has been adjourned.

During the first phase of the Cupertino Alliance (March 2019 - June 2019), information passed within the alliance was mostly kept in secret or published to news sites.[1] The earliest forms of a "gazette" were simply Discord announcements on new bills and members. A problem with this was that activities within the alliance were not well known and often restricted to delegates.

With the revival of the Alliance on 1 February 2020, the Gazette was formed by Jayden Lycon to communicate information regarding the Alliance to the micronational community. The Gazette was redesigned on 10 April 2020 as one of the projects to increase the formality in the alliance and to include more information such as updates to projects and opinion polling, as well as changing the font from Lato to Georiga. Though, due to formatting issues, the post-redesigned Gazette was moved from Google Docs to a PDF format.

The newly redesigned format takes some inspiration from the Alberta Hansard, with its use of the column layout, the similar front page, and more. Public reception to the Gazette is positive, with Zabëlle Skye calling it "professional and well organized".[2]

Though the task of the Gazette is normally handled by the Chair, due to increased workload, the Gazette hasn't been published. To compensate, it was decided to allow the public to view Cupertino Alliance sessions occasionally though the Discord server. There are plans to separate the duty of managing the Gazette to the Minister of Public Affairs.[3]

Originally, the Gazette was composed out of three parts:

Following the redesign, several more parts were added and changed:

Members in session and the transcript were kept in the redesign. 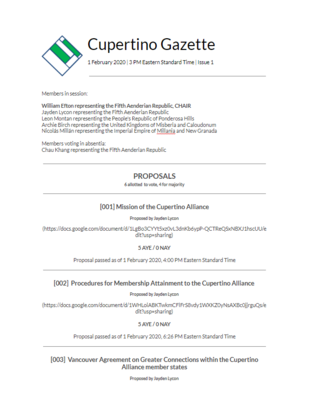 The original style of the Gazette, used until issue 11.

The Parliamentary Practice Act states that the Gazette is in public domain, and must be distributed without cost. Though, delegates may request to censor a part of the transcript for protection reasons. Other parts of the transcript may be censored if it violates the Mission of the Cupertino Alliance, 2020, or considered not safe for work or offensive. After a proposal reaches a majority or passes after 3 days, the proposal will be in effect after the publishing of the Gazette. If though the Gazette is published but a proposal does not meet the 3 days or majority threshold, the Gazette will simply read "TBD" as the result until voting is finished.[5]