The Cupertino Alliance Chair election was a planned election set to happen in January or February 2021 in order to succeed Jayden Lycon, who was not seeking re-election as Chair of the Cupertino Alliance.[2] Initially called in November 2020, the election. On 4 January 2021 candidate Daniel Hamilton formally dropped out of the race, resulting in a unanimous victory for a candidate Simon Reeve.

The 1st Cupertino Alliance chairmanship election held in August 2020 resulted in Jayden Lycon getting re-elected after a landslide victory against rival Sertor Valentinus. However on 25 October 2020 in a public address, Jayden Lycon formally stated that he would not be seeking re-election, citing that the alliance needed to move on, lack of time, and declining interest in micronationalism.

I must inform you that I have concluded that I have finished the goals that I was sought for and such it is vital for the alliance to endeavour a new direction. As such, I will formally not be seeking re-election.

Due to the significance of this election compared to the previous one, various ideas of elections in the alliance were amended.

Several candidates had expressed wishes to run for Chairman of the Board, however, these were unofficial. The only two candidates who submitted the necessary paperwork to become a candidate for the Chairmanship Election were Daniel Hamilton and Simon Reeve. These candidates at the time of Hamilton's suspension on 4 January 2021 were:

In the leadup to the election, candidates have begun to campaign in order to attract voters.

The Hamilton-Valentinus campaign team was composed of Daniel Hamilton, Sertor Valentinus, Zed, Casper von Naveria and Patrick Kenny. In an effort to attract voters, multiple campaign posters and logos were produced, bearing the slogans "Hamilton 2021" and "Strive to Revive". He also released a manifesto, expressing his goals as Chair of the Cupertino Alliance. Throughout November 2020, the Hamilton-Valentinus consistently scored first place in the pre-polls.[5]

The Hamilton campaign also engaged in virtual 'doorknocking', talking to individual delegates of the Alliance in order to discuss Hamilton's policies and encourage them to vote for Hamilton-Valentinus.

During December, Hamilton updated the campaign's website, in addition to releasing a speech discussing the Hamilton-Valentinus campaign plans. On 4 January 2021, Hamilton formally announced that he would be dropping out of the election, citing mental health as a primary reason for his departure.

Ross published a manifesto describing his goals for the future of the Cupertino Alliance. Ross also released his campaign website which included a 'blog' which was intended to be updated daily regarding news around his campaign and the elections. On 24 November 2020 Ross also announced that he would be holding an 'e-rally' on the Cupertino Alliance server to discuss his campaign and what his term as chair would include. This was held on 18 December 2020.[6]

On 24 November 2020 Ross announced that he had dropped out of the race to join the Munroe campaign. Just 3 days later on 27 November 2020 Ross announced that he had re-joined the race. Unlike other candidates, Ross prides his experience in comparison to other candidates, going as far as including it as a major part of his campaign.[7] On 15 December 2020 Ross confirmed that Matthew Xia of Yu-Xia would be his running mate, after previous running mate Leon Montan resigned to focus on the GUM elections.

On 4 January 2021, Ross was declared as the automatic winner of the 2nd Cupertino Alliance chairmanship election after rival candidate Hamilton dropped out.[1] Ross will take office on 15 February 2021 after Lycon's term concludes.

There were various scandals during the election period.

Various concerns were raised after the suspension of Roy out of the blue. Among them was candidate Liam Alexander. Following a heated discussion in the formal channel where Munroe stated that he believed that Roy did nothing wrong and assuming that he was banned for a previous comment in a private channel,[8] Lycon and Jamez later re-affirmed that the aforementioned incident was not the reason why he was banned but did not give the evidence used to make such decision due to an order from the Superior Judge.[9] An unconvinced Munroe later attempted to leverage Jamez into giving the evidence that was used to dismiss Roy, which Jamez refused, later leaking the message to a public channel.

From 26–30 November, Daniel Hamilton ran a pre-poll through Roscoe Statistics. It was revealed around 14 December that the vote of the incumbent chair Jayden Lycon was leaked in a private campaign channel. The Chair addressed the incident with a speech.

It has been known that Daniel Hamilton did admit to an incident of leaking my poll vote on the 27th of November in a private campaign channel. These polls were also a trust assessment for newer candidates and unfortunately, Hamilton has failed the test. However, as no campaign declaration was signed during the date of the incident and it was legal (but not ethical) during the time, as such, the CA is not looking for further action. It is unlikely that this action has continued. Any future candidate behaviour should be reported to the SJ and me. Furthermore, the above poll was seized by the CA and will be solely operated by the CA proper.

Public endorsement supplied as evidence in the original complaint.

On 1 January, Hamilton launched a complaint against the Acting Superior Judge accusing them of violating the Judicial Impartiality Act, following alleged contributions to the Ross-Xia campaign through a public endorsement. The claims were quickly rebuked by the judge, who stated that the legislation does not prohibit public endorsements. 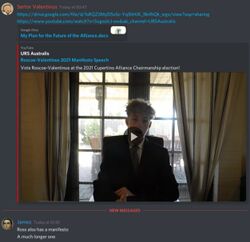 A couple of days following the initial incident, the judge posted a comment interpreted as an advertisement for the Ross-Xia campaign by Valentinus, who removed the post and James Bornstein from the server. The judge later re-entered the server, demanding re-entry to monitor the campaign for transparency.

The incident escalated when Jamez posted a statement on the main Cupertino Alliance condemning the incident.

I was just banned from the Hamilton server. I stated an objective fact. The campaign violated the privacy of our Chair. They have refused to allow alliance admin or judicial individuals to supervise campaign chats. The Ross campaign has done the opposite.

An argument ensued in the Discord server, with Matthew Xia stating "this has just turned to petty insults from both sides"; this was objected to by Mike Lewis and Jamez, citing that it was a "civil" and "healthy debate". Jamez was eventually permitted to re-enter the campaign server after further discussion.

Along the campaign trail, multiple organisations have held opinion polling in order to predict the winner of the race, in addition to gathering statistical data. Notable organisations that have run polls for the election include the Cupertino Electoral Supervisory Commission (CESE), Hamilton Statistics and the Micronational Gazette. Early polls showed candidate Daniel Hamilton to be leading the race however polls conducted towards the end of December showed an increasing influence by candidate Simon Reeve.