Humberlea is a micronation that is located in Toronto, Ontario.

The name Humberlea comes from the community which is bordered by the Humber River and was a flat lea, both together which make Humber-lea. The Humber comes from a coastal area in Northern England which comes from Celtic, the word means is theorized to mean "Coming Together".

Start of the Nation

The start of Humberlea was conducted when the Matachewan Commonwealth decided it need a outpost within Toronto in order to prevent a open route for Etukaran Raids to enter Matachewan, such as Niagara-Etukan War in late 2019 in which the Matachewan homeland was threatened, forcing a peace deal favouring Etukan to be signed by the two. The leader of this outpost was decided to be headed by Nicholas Lokin, with the name Humberlea being decided by Nicholas as it was the name much of the community used for affairs based on where the kingdom was set to be, a few days after he was announced as King of Humberlea on December 14, 2019 under the Matachewan Commonwealth.

The creation would encounter mutiple issues shortly after, with the initial claim overlapping with the Etukan Colony of Niagara (which was established after the Niagara-Etukan War), although the claims were very heavily simulationist, Humberlea opted to choose a small deal proposed by Etukan, vastly limiting the initial (but simulationist) claim of the micronation.

With Humberlea's main purpose being a commonwealth state, they had a lot of influence regarding the commonwealth. However with this detail it posed mutiple issues with both Liberal, Conservative and Yedinist Politicians wishing to gain control in the new country, notably Zech O'Hair of the Yedinists who wished to gain a foothold in the commonwealth as they had been banned from the Matachewan mainland and had their citizenship revoked, so they looked towards members of the commonwealth, primarily Humberlea as it was new and had a very small set up population.

With a weak population, the yedinists decided to mass immigrate to improve their influence inside of the kingdom, this would result in the O'Hair government gaining power with a large support from the population. Later Matachewan decided to fight fire with fire, creating a massive divide in the nation, half Matachewanian, half New Prussian and Etukaran.

Being made. With a massive divide in the population, nothing was going well, fights broke out in multiple of the discord servers channels, the parliament was collapsing and fighting each other, bills being proposed to take down each the other, O’Hair banning multiple citizens from the country, all that was needed was something to make this fire explode, and then, the February Elections.

With the February elections, more Yedinists and Matachewanians were joining then ever, Prime Minister O'Hair versus a newcomer, but Matachewanian, Aleksander, with so many Matachewanians coming in, and the Yedinists losing a grip, Yuriy Aleksander won the elections, O'Hair Speaker of Parliament and Chris Miller back in, O'Hair was mad, he demanded Chris be removed again, when King Nicholas put his foot down and said no, O'Hair had enough, he began to delete channels in the discord server, one by one, until all of channels that he could see were gone, he was banned on the spot, all of his fellow party members detained, Humberlea had to rebuild.

With the server destroyed, it was time to rebuild and come out from the rubble, so the country began to rebuild on a united front, due to O'Hair's actions yedinists in the region began to leave due to a bad treatment from the citizens, the country had built from almost nothing, the day the most work was done was decided to be called Resurgence Day, the King declared it a national holiday. Though the country had rebuilt, the activity had not, the server was inactive from onward until after the Commonwealth Era had ended, 2 months of nothing had begun.

End of the Commonwealth

A few months after trying to get the server active again, all with fail, at this point King Nicholas, Emperor Brandon and Grand Premier Brendan all agreed the commonwealth had served it's life, and now it would be time to end it, for some reason this would spark the activity after Nicholas asked the population if they wanted to get active again, finally, it was time for Humberlea to reign again, finally, Humberlea was back!

All elections after this point consist of Prime Minister, Parliament and Senate. 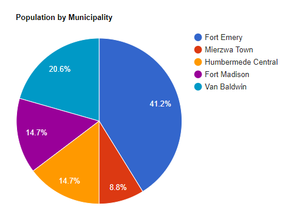 The current Humberlean Economy uses the Humberlean Narto, at the moment of writing this, the Narto is pegged to 5 Canadian Cents, 1 Narto is worth 5 Canadian cents. People in Humberlea trade for everyday things using the Narto, labor, buying items, entrance into a location, basic things.