Christina I, Summi Imperatoria of Cycoldia

Christina I & II (Christina Hamilton Nowell, born 6 May 2005) is the current reigning Summi Imperatoria[1] of Cycoldia and an intermicronational politician, herald, and businesswoman. She as well is a former patroller at MicroWiki and former moderator at MicroWiki@Discord. She founded Cycoldia on 6 November 2018. In addition, she is the monarch of the Cycoldian Imperium.

She has as well been on MicroRamble, first as a guest, though later becoming a co-host of the show. She is also the editor-in-chief of the Grandeur Print, and became a member of the staff of the Creek Gazette through her position as Queen of the United Kingdoms of Creek and Lake. In her positions in the private sector she formerly was the Public Relations Secretary for Statistic-Dime, until her exit from the company and joining of DSD Statistics. In other sections in the private business, she is the chairwoman and owner of Empreton Holdings. On 19 January 2022 she was re-employed by Statistic-Dime as Public Relations Secretary and a member of the Board of Directors of the company until her resignation on 29 January 2022 from her positions in Statistic-Dime.

Christina graduated from Prezan Military Academy on 15 July 2021, having been valedictorian of Class 001 of the Academy for Basic Curriculum.[2] She was awarded the Attendance Award, Good Conduct Ribbon, and the Professional Development ribbon for her time in Prezan. She graduated a Cadet Corporal, and as the Class Leader of Class 001.

On 18 August 2021 she became the Empreton Pursuivant of Arms of the Academy of Arms, having become a member of the Academy on 17 August 2021. She later was promoted to Empreton Herald of Arms in the academy and was added as the Officer-in-waiting.[3]

Christina I & II was born on 6 May 2005 in Denver, Colorado. At a young age her parents divorced, causing her to go from each house to the other commonly. Her father later moved to Santa Fe, New Mexico for work, with Christina moving between the 2 houses commonly. Afterwards her father moved to Houston, Texas, followed soon by her mother. She came out as transgender on the 26 September 2019, later becoming an advocate of LGBTQ+ Rights. Christina I & II currently goes to high school in the US state of Texas in Houston, living in both the Royal Palace and Pine Palace moving between the Capital District and the Pine District.

Christina I & II joined the Academy of Arms on 17 August 2021, becoming the Empreton Pursuivant the next day. She worked on multiple commissions for the academy, later then being promoted to the Officer-in-Waiting of the Academy of Arms, and being made to the Empreton Herald. Later the positions of specific names for Heralds and Pursuivants was abolished by dictate of the Marshal of Arms, and so therefore she changed office to simply be a Herald and Officer-in-Waiting. In this capacity she has continued to work as the Officer-in-Waiting and still works on commissions.

As well Christina I & II has served as the Imperium Herald of Arms of the Joint Heraldic Authority since 12 May 2022 being one of the Heralds of the Authority, and one of the two Heralds who come from Cycoldia, the other being Arthur Lacey-Scott. She has designed coats of arms for members of the Royal House of Nowell, and the coat of arms of the Grand Republic of Cycoldia. Past this as well she is a member of the Heraldry Society, a British organisation founded by John Brooke-Little.

Christina I & II has been very vocal of her political ideals, such as advocating for Constitutional Monarchy and for LGBTQ+ Rights. She describes herself as a Royalist, and falls in the ideological center of the "left/right" spectrum of conservative vs. liberal politics. She primarily supports the Democratic Party over the Republican due to her belief that the parties are becoming extreme,[4] and says the Republican Party is becoming radicalized to a further degree than the Democratic Party in the United States. She as well has stated her advocacy for protection of people with mental illnesses, having publicly included statements on mandated reporting.[5]

She has as well has stated that an unconstitutional monarchy would not work in modern society, and that an American Monarchy would not function properly, stating "while I would love the concept, nobody would support it, and it would crumble." As well she has stated her support for the reign of Michael I having said that he was "a man who lead his country through one of its hardest times in history, and tried to salvage what it was in the end" and saying that for herself "it is saddening that he never got his crown back."[6]

Christina I & II has stated many times regarding her stance that religion in politics is highly inappropriate and has stated that in the United States, the current stance of the Republic Party is to perpetuate Christianity in the political process. She was the author and main champion of the Religious Extremism Act within Cycoldia[7] which criminalised religious leaders telling their congregants to commit any crimes, citing it as "Religious Incitement". It as well declared regarding the protections of religions, saying that religions which do the following were not protected by the Third Amendment of the Cycoldian Constitution.

Religions that control or limit someone’s freedom of expression, someone’s basic human rights, or any policies of the religion that may injure or cause harm emotionally to its own members or people outside of the religion fall under this act.

Politics in the United States

Throughout her life Christina I & II has described herself as in favour of the Democrats, though she has as well stated against the Democrats in the past, becoming increasingly more critical of the party in regards to economic policy and hesitancy with progressivism. She has described herself previously as an extreme progressive, including saying that her advocacy for progressivism is separate from her ideology regarding economics and economic inequality. She has as well previously stated on economics in the United States that "capitalism hasn't failed, the government failed to regulate it" in reference to her philosophy that capitalism in the United States should not be practiced by the government.

She previously as well has called the Texas GOP a pro-fascism and anti-democratic organisation[8] and has called Gregory Abbott "insurmountably horrendous" and compared his actions as Governor of Texas to the actions of George Wallace's pro-segregation governorship in Alabama.[9] She as well has called the United States Supreme Court the "enemy of the people" for their ruling in Dobbs v. Jackson Women's Health[10] and endorsed Beto O'Rourke for Governor of Texas in the 2022 Texas gubernatorial election.[11]

See also: List of micronations where Christina I & II is Monarch 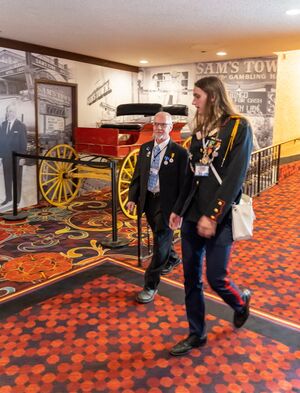 Christina I & II speaking with Ronald Hall, Vice President of the Republic of West Who at MicroCon 2022.

Christina I & II has held many offices among many different micronations, though the micronation she works most in is Cycoldia. She as well has served in multiple intermicronational positions, such as her position as a Patroller at MicroWiki. She as well formerly served as a Moderator to MicroWiki@Discord until her resignation.[12] She has been a member of the MicroWiki Community since 31 December 2018, and has worked in the sector for a majority of the time she has been in it. She was an attendee at MicroCon 2019 and MicroCon 2022.

Other intermicronational activitied she participates in was serving as the secondary delegate for Lytera in the Grand Unified Micronational and the delegate for Cycoldia to the YAMO Federation. In the 2021 December Election for Chair of the Grand Unified Micronational she was running as a candidate with Amelia Banks as her running mate for Vice-Chair. She later resigned as a delegate on 4 January 2022 after the appointment of Abrams Wiucki-Dunswed as Supreme Justice.

I cannot applicably serve as a representative to a body which shoots itself in the foot every step it takes.

— Christina I & II commenting on her resignation, 5 January 2022

Christina I & II was the founder of the Cycoldian Imperium by Imperial Order 2.7,[13] and has overseen several joinings into the Imperium, and serves as the monarch of Cycoldia, Jockromasa, Lur, Dathuria, the UKCL, Sequeria, and Altearn as a partial member. She has overseen several nations joining the Cycoldian Imperium, and oversaw the exiting of the Imperium by Ela'r'oech along with at the time colonial governor of Ela'r'oech, Moradin Fenri.

Christina I & II founded the Grand Republic of Cycoldia on November 6, 2018, as an absolute monarchy, being confirmed as monarch on the same day. She later authored the Constitution of the Grand Republic of Cycoldia after the 5th Civil War, which established the General Assembly and changed the nation to a constitutional monarchy. As well after this she approved the changes to succession to the crown to make it a hereditary monarchy rather than elective after a suggestion of it came from the General Assembly.[14]

She sat as the Chief Justice during the Trial of Gavin B, which was the first court case held in Cycoldia, and she has continued to serve on the Court of Houston[a] since the establishment of the court. As well via the Constitution of Cycoldia she will continue to serve as the Chief Justice until she either dies or abdicates the throne, though she has recently at no point described an intention to do so. She as wellhas served as a member of the General Assembly as the Royal Seat within the assembly.[15]