From MicroWiki, the micronational encyclopædia
(Redirected from Sancratosia)
Jump to navigation Jump to search
This article is about the sovereign state. For the municipality, see Municipality of Sancratosia.

(listen))), officially the Principality of Sancratosia (Lingua Franca Nova: Prinsia de Sancratosia), is a sovereign state operating within a self-proclamed extraterritorial territory located in North America. It is classified as a micronation by most external observers. The nation declared its independence on 1 December 2021 (2021-12-01).[1]

The Principality is a semi-constitutional monarchy where the sovereign personally exercises power in concert with other institutions. Unlike traditional monarchies, the monarch does not source their power from a God but from the people.

Sancratosia's name comes from the combination of two Greek words "σαν" and "κράτος" meaning "like a; as a" and "state". The name was chosen from the aspiration in the foundation of a nation that could be considered equal to other nations. On 21 October 2021 (2021-10-21), the name was officially adopted, a date known today as Emergence Day in Sancratosia.

Rise of the Sancratosia family

In 2006, Chloé Fortin Côté began to be interested with the phenomenon of micronations, especially the nations of Sealand and Molossia. Many years later, the COVID-19 pandemic and the subsequent lockdowns that resulted revived this interest which was directed at first in hobby worldbuilding.

In the first weeks of October 2021, the hobby turned to micronational creation and Chloé started the process of formally declaring independence. The first form of government envisioned was one of a constitutional state, being influenced by the constitutions of lusophone countries such as Cabo Verde or Mozambique. However, the size of the governmental structure of such large states and the desire to be able to exercice some control on the direction of the nation in the long term prevented any of these influences to be applicable to Sancratosia. Other historical constitutions were studied, such as the Constitution of the July Monarchy or the Constitutional Charter of 1826 of Portugal. Chloé then settled on Monaco has its main influence to guide its micronational formation.

On 24 November 2021 (2021-11-24), it was established that the form of government would be a principality with Chloé has Sovereign Princess who would take on the regnal name of Princess Cloe of Sancratosia, dropping the "H" not present in Lingua Franca Nova.

After a week of writing, the Declaration of independence was officially signed by the Sovereign Princess, as her first act in office.

Following the independence of Sancratosia, facing the challenges of establishing a functioning state, a Sovereign Ordinance giving temporary absolute power to the Sovereign Princess was promulgated on 2 December 2021.[2] This ordinance allowed the passing of laws, with the absence of an elected National Council, concerning mostly cultural elements such as the national symbols or the public holidays and most notably the Law on the provisions against discrimination which is considered to be the main legislative piece on LGBT rights in Sancratosia.[3]

On 11 January 2022 (2022-01-11), Cristian Neuton was appointed as the first Minister of State of Sancratosia.[4] His mandate was to help the continued development of the Principality, most notably the recruitment of ministers and other civil servants. 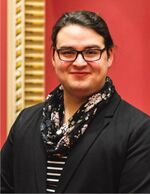 According to the Constitution, Sancratosia is governed under a constitutional monarchy, with the Sovereign Princess of Sancratosia as head of state. The executive power is exercised by the Minister of State as the head of government, who presides over the Government Council.

The prerogative to propose and promulgate laws belongs to the Sovereign Princess, while the National Council gets to modify and adopt them. This shared legislative power is also applied for every revision of the Constitution.

Sancratosia adheres to the declarative theory of statehood, every states that have a defined territory, a permanent population, a government and the capacity to enter in relation with other micronational states is de facto recognized by Sancratosia. However, de jure recognition is not given out to States which have views aligned with the far-right. The Ministry of Foreign Affairs maintains a list of states which received official mutual recognition from Sancratosia[5].

The Principality is also a signatory of many conventions and accords such as the Wrythe Convention, the Edgbaston Convention, the Augusta Accord and the Protocol of Klöw.

On 20 February 2022 (2022-02-20), Sancratosia became the second Canadian-surrounded nation to be admitted as a member in the Conference of Santiago.

Sancratosia is located in Northern America and is completely surrounded by Canada, and entirely within the province of Quebec. 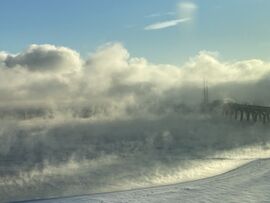 Fog forming above the river on a winter morning near Sancratosia

Sancratosia's climate is exactly the same as the southern part of Quebec. It is classified as a warm-summer humid continental climate (Köppen climate classification: Dfb)

The government of Sancratosia takes its climate data from Canadian official sources for the region of Montreal.

The Principality considers the place from where it operates to be an extraterritorial territory from which it exercises its sovereignty. There has been no official recognition of its extraterritoriality status.

For administrative purposes, the municipality is currently divided in five districts:

Sancratosia does not have a sustainable economy. The Principality is entirely dependant on the personal fortune of the House of Sancratosia. According to the Constitution, the Sovereign Family must be paid first on the national budget before any other expenses are made, which, for the moment means that the entirety of the state's revenues go directly to the Sovereign Family.

Sancratosia has a 25% value-added tax (VAT) on most goods and services. Prices are normally presented with the included VAT. There is no income tax on citizens.

Because of the close proximity of Sancratosia with Canada and the United States, the Canadian dollar and the US dollar are both accepted for affairs in Sancratosia.

Sancratosia's population was 3 in 2021 and counted more residents than nationals. At the beginning of 2022, the Principality made official and publicized its naturalization process and citizenship program.[7] On 30 January 2022 (2022-01-30), less than a month after the opening of the program, Sancratosia reached a population of 10 citizens.[8]

Citizens of Sancratosia, whether residents or nationals, are called Sancratosians.

The Principality of Sancratosia classifies its citizens into two categories: nationals and residents. Sancratosian nationality is mutually exclusive with that of other nations and the acquisition of the nationality from another nation will result in the loss of Sancratosian citizenship.[b] An exception is made for individuals which may not renunciate their nationality.

Residency[c] is open to everyone but there are some limitations to the accession of political functions within Sancratosia.[9]

The acquisition and reacquisition of nationality is the prerogative of the Sovereign Princess.

The Constitution determines that Lingua Franca Nova, also know colloquially as Elefen, is the official language of the state, while French and English are recognized as national languages.

Quebec Sign Language is often considered to be the de facto official sign language of the nation, due to the lack of a signed version of LFN.

Because of Sancratosia's relations with some Brazilian micronations and the personal interest of the Sovereign Princess in Portuguese, it is often considered to be a recognized language in Sancratosia.

Public holidays[d] are celebrated in Sancratosia normally by taking a day off. If it falls on a weekend or if there is no work scheduled during the coming holiday, the day off is taken on the closest business day. 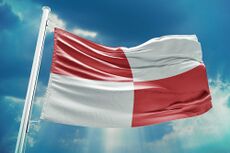 A mockup of the national flag of Sancratosia

The national flag, the princely flag and the coat of arms are the only national symbols specifically mentioned in the Constitution. Other symbols such as the national anthem are determined by law.

The national flag of Sancratosia is quartered of red and white, in the same pattern found on the coat of arms of the Principality. The princely flag consists of a white field with the coat of arms in their greater version charged at the center. The national flag is used in every capacities while the princely flag is mostly only used in the presence of a Sancratosian official such as the Sovereign Princess or the Minister of State.

Signature of the government of Sancratosia 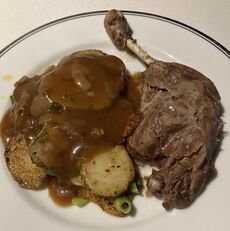 The cuisine of Sancratosia is mainly influenced by Quebec cuisine.

Some staple foods from Quebec cuisine that are included in the Sancratosian diet are the poutine, the soupe aux pois, the pizza-ghetti and the sucre à la crème, the latter being the official dessert of the Principality.[11] Maple syrup is also used a lot in Sancratosian cuisine, especially on deserts such as crêpes.

Certain meals are tied with national and public holidays in Sancratosia such as Goose Day, where meals related to small birds are eaten. Meals such as foie gras or duck confit are a staple of this holiday. Meals are also adapted to the season like during the winter months when richer meals are eaten.

The most popular drink in Sancratosia is coffee but tea also enjoys a relative popularity.

Sancratosia has three national museums. Two museums consists of personal collections of the Sovereign Princess, while the third one is dedicated to the preservation of the history of Sancratosia.

The two National Museums dedicated to personal collections of the Sovereign Princess of Sancratosia both concern Canadian history. The Rhys T. Eyton National Museum covers the history of Canadian Airlines, former airline giant that was in operations from 1987 until 2001. The museum features memorabilia from the airline, as well as internal items from the company belonging to former employees. The Nadia Comaneci National Museum features an extensive collection concerning the 1976 Summer Olympic Games in Montréal. Some of the most notable items from the museum include an official participation medal and a signed gymnastics ticket by Olympian Nadia Comăneci, first-time gold medalist at the 1976 Summer Olympics.

The Duchess Maria I National Museum and Archives, named in the honour the grandmother of Princess Cloe, features items from the history of Sancratosia and the micronational community in general with items such as a 1994 Sealand Half-Dollar, being part of the featured items from the museum. It is also where the Crown Jewels of Sancratosia are kept.