Her Majesty Queen Maria I (Maria Alessandra; 23 December 2002) is a micronationalist, royal and is the Queen of Sildavia since 17 February 2020. She is the first female Head of State of the Conference of Santiago, an advocate for LGBTQIA+ movement among Brazilian micronationalists and one of the founders of the Brazilian sector, a strong supporter of the derivatist micronationalism. In 2021 she assumed the additional title of Czarina of Borduria.

Maria is the daughter of Sebastião, Duke of Flaviano and Sonia, Countess of Koniktz. She assumed the Sildavian throne in 2020 with the foundation of Sildavia as a principality. Though a constitutional monarch at the beginning of her reign, Maria attempted to influence government policy and ministerial appointments and finally became an absolute monarch when she became Queen, on 2021.

Publicly, she became an icon who was identified with the defense of LGBTQIA+ rights, freedom of expression, religious freedom and democracy. She was also the author of the first two constitutions of Sildavia and one of the minds behind the Protocol of Klöw.

Maria's father is Sebastião, Duke of Flaviano, head of the House of Flaviano, cadet branch of the royal house of Sildavia. He married Sonia, Countess of Koniktz. Her parents had children from other relationships. The Duke and Duchess of Flavianos's only child, Maria, was born on 23 December 2002 at Barão de Cocais, Minas Gerais, Brazil.

She became involved in micronational affairs since the foundation of Sildavia, in 17 February 2020.[1] from the following months, she became also direct envolved with another projects, especially within Brazilian sector, being also a supportive member of the Nuremberg Commune, where she ascended to the office of People's Commissar for Communication and is one of the leading figures of the Conference of Santiago.

Founded by Royal Decree No. 01/2020, Maria founded the Kingdom of Sildavia and assumed the title of Sovereign Princess. On 28 February 2020, the princess granted the first Sildavian constitution,[2] which became known as the 2020 Sildavian Constitution, or Primary Constitution, which established the principality as a constitutional monarchy. After granting the constitution, a Regency was established,[3] but was short-lived and would finish within a month. During what is known as the March 2020 Decrees, the princess established the national symbols of Sildavia[4] and approved the creation of the first political parties, the neoliberal Liberal Sildavian Party and the socialist Labor Party.[5] 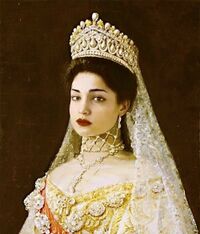 Official Portrait of Maria as Czarina of Borduria (2021).

On 4 April 2020, she signed the Treaty of Persenburg and the Protocol of Goetha, and through this she introduced Sildavia to the derivatist movement on micronationalism, avoiding the historical-modelist simulations that claimed to be micronations, so common in the so-called Lusophone sector. Through the treaty, Sildavia became one of the first micronations of the Brazilian sector and a fierce opponent of the simulationism. She would also become one of the founding members of the Conference of Santiago with the Treaty of Santiago and developing an important role during the Santiago-Mansean Conflict, along Ebenthali and Lateran against Mansean aggressors.[6]

In May 2020, the Prime Minister resigned and the leader of the Liberal Party, Countess of Almeida-Pereira assumed the office. Under her government, Sildavia would ratify the Convention of Mauritsstad,[7] regularizing relations between the micronations of the Conference of Santiago[8] and virtualist micronations on 8 May 2020. Taking part in the promotion of the Brazilian sector abroad, by September 2020, Sildavia established the first mutual recognition with a micronation from another sector, the State of Vishwamitra.[9]

On 27 January 2021, the Sovereign Princess assumed all powers of the principality and on the following day, promulgated a new constitution[10] and started a period the national historiography calls "Marian Era". On 2 February 2021, by royal decree, the Sovereign Princess raised the principality to kingdom ruled by an absolute queen.[11] In February she created the Protocol of Klöw and presented it on the Conference of Santiago.[12] In April 2021 she founded the Bordurian Empire and assumed the title of Czarina of Borduria.[13]

On 7 June 2021, the Grand Duchess Gabriela and the Queen began negotiations for the emancipation of the Grand Duchy of Mëcklewmburg-Wladir as an independent state.[14] The negotiations ended twenty days later, on June 27, with the Treaty of Mëcklewmburg-Wladir, and keeping Maria as head of state in a diarchy with Grand Duchess Gabriela. After that she became head of the Sildavian Commonwealth which was founded by the treaty. In August 2021 she officially became the first Secretary of Diversity of the Conference of Santiago, by appointment of the Secretary-General of the Conference, the Emperor-King of Karnia-Ruthenia.

On 10 December 2021 she abdicated the throne of the Grand Duchy of Mëcklewmburg-Wladir in favor of her co-monarch, the Grand Duchess Gabriela, starting the transition of the country from a diarchy to a monarchy, and received the title of Grand Duchess Emeritus, and Countess von Reinbitz.

Main article: List of titles and honours of Queen Maria I of Sildavia

1 August 2021 – present: Honorary Colonel of the Imperial and Royal Regiment of Hussars

As Sovereign, Maria I uses the royal coat of arms of Sildavia as her personal armorial achievement. However within the Imperial Province of Borduria, she uses some other symbols. She is also the bearer of several variant armorials granted on her by other nations as recipient of several titles and orders. Before becoming sovereign, she was styled as "Her Serene Highness, the Princess Maria Alessandra de Flaviano". In her coat of arms she used her father's arms, impaled with her mother's in a lozenge, and a princely coronet.