She was born in Montréal, Canada and studied political science at Université du Québec à Montréal. During her studies, she participated in many model parliaments in Québec and ran twice in Quebec general elections.

Princess Cloe was born at Hôpital Notre-Dame in Montréal, Canada. She is the daughter of Maria II, Duchess of Sancratosia and Donato, Honorary Duke. She has two younger brothers, Nicola and Mateo, both Honorary Dukes. She lived most of her life in Boucherville, on the south-shore of Montréal, before moving back in Montréal in 2013. She attended the Collège de Maisonneuve before studying political science at Université du Québec à Montréal. While studying, she worked as a tour guide at Montréal's olympic stadium. In June 2020, she started working as a communications officer for a pedestrian rights advocacy group in the Province of Québec.

Cloe made her official coming out as a transgender woman on 15 July 2015 (2015-07-15) and has been sporadically engaged in LGBT rights, mostly through open letters to newspapers.[1] 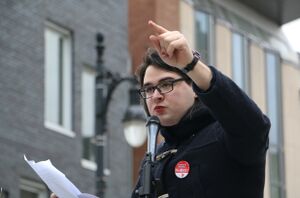 Cloe has been politically active, running twice in Quebec general elections, finishing 4th place both times and improving the scores from the previous election. 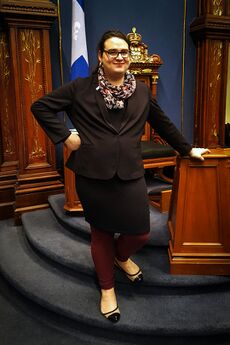 She has been an active member of model parliaments in Quebec, namely the Forum Étudiant and the Parlement Étudiant du Québec (PEQ). Over the span of 5 participations, she assumed the positions of Minister of Transportation, of Democratic reform and Chair of the Conseil du trésor, submitting two bills. In 2016, she became the first transgender to participate in the model parliament[2] and in 2019, she had the honour of becoming the first transgender to sit in the seat of the President of the National Assembly of Quebec during a PEQ simulation, the position being awarded to honour former participants.

Also involved in unions, in 2015, she became the first transgender to lead a union strike in the Province of Quebec.[3] She was to lead a second union strike but it was cancelled due to the COVID-19 pandemic outbreak.

The early days of her reign were essentially dedicated to the establishment of formal diplomatic relations with other nations, as stated in her message to the Nation.[5] She also spent some time in the continued development of the Principality, most notably the writing of the Constitution, as mandated by the Declaration of independence.

On 2 December 2021 (2021-12-02), she published her first Sovereign Ordinance.[6] It concerned the temporary exercise of absolute power in the Principality. She followed with other Ordinances that concerned mostly the signature of many conventions and accords such as the Wrythe Convention, the Edgbaston Convention, the Augusta Accord, the La Salle Convention and the Montediszamble Convention. She also signed the accession to membership status in the Union Against Micronational War and the Alliance of the Micronations as well as an official participation to the intermicronational 2022 Winter Olympics boycott.

As the head of the House of Sancratosia, Princess Cloe is allowed to bear the coat of arms of the Principality as her own. However, she was attributed some personal arms which are more representative of her own person. With the main shield taking the same design from the flag of Sancratosia and three black five-pointed stars, representing the number "15", a personal and important number to the Princess. A smaller shield stands in the center, composed of three horizontal bands of light blue, white and pink, colours associated with the transgender flag. The personal arms of Cloe feature a crowned helmet instead of the Sovereign Crown on top of the shield. The Order of the Sovereign is standing around the shield instead of the Order of Sancratosia.

Cloe quickly became interested in the phenomenon of micronations such as Sealand and Molossia. She owns a 1994 Sealand Half-Dollar which she acquired in 2012.

Cloe is an amateur and self-taught artist. She has been interested in many different mediums. Notably, she was involved in stereoscopy and developed a pair of snap-on 3D glasses to change the different filters. From 2018 to 2020, her political artwork was featured on the French canadian-speaking television show Infoman on Radio-Canada.[a] One of her artwork gained recognition from Valérie Plante, Mayor of Montreal.[7]

Interested in languages, Cloe is fluent in French, English and Quebec Sign Language, she is learning Portuguese, Dutch and has an interest to actually learn spoken Lingua Franca Nova.

Cloe once piloted a Cessna 172 airplane on a flight from Mascouche to Mirabel, landing at the then decommissioned Montréal–Mirabel International Airport.

The official style of Princess Cloe is Sovereign Highness. This is a style that is unique to Sancratosia and exists because of the lack of a proper translation for the term serene, the most common style among sovereign princes and princesses. However, because her title is Sua Altia Suprema in Lingua Franca Nova, she is sometimes styled as as Supreme Highness, a literal translation of the term. The most common foreign mistakes in her styles are Serene Highness, because it shares the same initials, and Highness, because many Princes and Princesses are styled that way in kingdoms.

The long official title of Cloe is:

The long title is rarely used, even in official capacities and is essentially only used at the coronation. The most commonly used title is the shortened version :