Anthony I, Emperor of Saspearian

Anthony was formerly a Brony, as he enjoyed watching the TV show, My Little Pony: Friendship Is Magic. Since 2015, he is no longer a brony, with him citing his disinterest in the show.

Anthony I resides in the Emperor's Residence, which straddles the United States and Saspearian.

Anthony goes by various nicknames and Pseudonyms. In Saspearian and by foreign nations, he is known as Emperor Anthony I, or alternatively, Anthony I. In the context of domestic nations (not including Saspearian), he is known by his first name and the initial of his last name, "Anthony G."

On YouTube, he is known by his YouTube username, French fry Gamer, or simply referred to as Anthony.

Emperor Anthony I addressing the nation regarding the Saspearian Declaration of Independence. 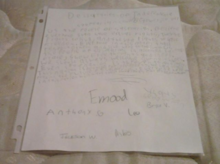 The Saspearian Declaration of Independence.

During his reign as Emperor, he significantly contributed to Saspearian and has overseen the namesake Emperor Anthony I Era and the Modern Era of Saspearian. He also states it as his 'flagship' micronation. In February 2019, Anthony I established Logejo Agriculture, an agricultural business. Shortly after its foundation, the business collaborated with the Saspearian Government for the Kalliergo I mission to successfully cultivate Peach plants in Saspearian. While Anthony I wanted to develop Saspearian further and start an industry in the country. The mission is still considered to be ongoing as of January 2021. Throughout November and December of 2020, Anthony I drafted the Saspearian Constitution. On 31 December 2020, he ratified the Constitution. On 21 January 2021, Anthony I and Rory McPhail founded the Saspearian National Party shortly before the 2021 Saspearian general election, as they shared the same idea in establishing a political party in Saspearian. Anthony I serves as the first and current Chairman of the party.

In Faltree, Anthony G. served as a Senator of the Faltrian Senate throughout various times, since becoming a citizen in June 2021. He has served as the Senator of Aleunnic Faltree, Stonefort, and Berthold.

Anthony I was a citizen of the Austenasian Crown Dependency of Bregusland. In May 2020, Anthony I campaigned for Chief Secretary, however, he was eliminated in the first round of the election.

Anthony has served as a member of Yu-Xia's Global Council since first being elected in February 2021. In the June 2021 Global Council Election, he was re-elected. Anthony runs the namesake Anthony Party of Yu-Xia.

Anthony has made a few works in the field of micropatriology since 2020.

On 12 November 2020, Anthony I developed the Anthony Scale which classifies characteristics of nations such as a macronation (country) and a fictional micronational entity, the scale is comprised of 5 categories ranging from a Grade 0 Nation to a Grade 4 nation.

Anthony I coined the micropatriological term "Supersector" on 2 February 2021.

Anthony I runs the French fry Gamer YouTube channel (formerly known as Gaming Craziiepic), the genre of content for the YouTube channel is mainly gaming. However, there are some other videos uploaded with different content on the channel, such as vlogs. This channel is most notable in micronationalism for featuring videos about Saspearian. These videos have since been discontinued in favor of the videos being uploaded on a secondary channel, Saspearian Gov. The channel has over 100+ subscribers as of June 2021.

Anthony serves as the Band Manager of Grand, as well as being the producer of the band's songs catalog.

On 4 July 2017, Anthony announced that he was running for President of the United States of America for the 2020 United States Presidential Election in a video published on French fry Gamer as a semi-satirical announcement. He went on to mention that he is running as an Independent Candidate and that he supports increasing the budget for NASA in the sense of the United States returning to the Moon. He also wished for a Happy American Independence Day, as the date that the video was made coincided with that day.

It is not known if Anthony I actually gained any votes during the election. Therefore the assumed votes cast for Anthony I are 0.