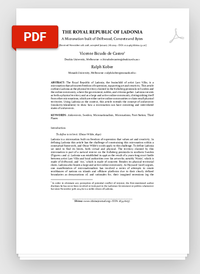 Jose Pedro Zúquete argues that micronationalism in Europe is part of an identitarian against globalisation and supranational integration projects like the European Union, with micronations a way to reassert local distinctness.[1] Similarly, whilst Bronwyn Winter proposes that micronations "are rooted in various combinations of protest, self-aggrandizement, sometimes financial considerations (fiscal evasion being a common basis for a micronation), and simply creative fantasy",[2] she argues that, particularly in Australia, the existence of micronations demonstrates "that the idea of national sovereignty and the political, economic, and territorial rights that go with it are of fundamental importance to individuals and social groups, however constituted, even if the nation is simply an extension of one individual".[2]

Ralph Kober in 2018 analysed the Principality of Hutt River through Ryan Anderson's concept of aislamiento,[3] a sense of geographical and psychological isolation that constitutes a place as an "island".[4] Kober concluded that as Hutt River was in an isolated area and HRH Prince Leonard was happy to "maroon himself there", the micronation constituted an island, revealing the "deeply social and political nature of aislamiento".[3] 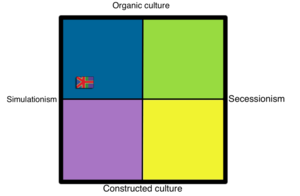 The micronational compass is a two-dimensional model of micropatriology developed in 2019 and 2020. It has two axes, one distinguishing simulationism and secessionism and the other distinguishing organic and constructed cultures. The former axis is defined differently to in classical micropatriology; on the micronational compass, "simulationist" means that a micronation simulates the process of government, economics, and so on, running like a roleplay, while "secessionist" means that a micronation's government actually provides some services or protection, and its economy actually functions, and so on.[5] If the discussions in government and internal politics of a micronation are just meaningless fun, the micronation is more simulationist; if the discussions actually matter and people are genuinely invested in the alternative outcomes, the micronation is more secessionist.

Parallel plane theory is an approach to micropatriology in which micronations and macronations are seen as existing on two non-overlapping planes of existence.

Motive micropatriology was developed in 2021 as a proposed replacement for Classical micropatriology. Motive micronationalism relies on a two-dimensional model, featuring a ludic and narrative axis, and a hobby and achievement axis. The school of thought was developed as a criticism of Classical micropatriology, with Gaius Soergel Publicola stating in an article for Veritum Sandus that Motive theory was a continuation of New Secessionism on the basis of the 'emperors new clothes' criticism. The model uses different criteria for classification of micronations; the ludic vs narrative spectrum measures the motive behind the day to day activity of a micronation, whereas the hobby vs achievement spectrum measures the motive behind the practical goal of the micronation.