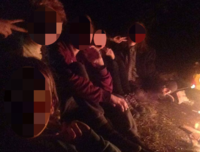 Five Glastievens performing the Glastieven salute during a Night Walk. Creating the salute and organising the Night Walks were both New Secessionist government policies.

Early New Secessionist thought was based heavily in Glastieven history from 2015 to 2018 and in the parallel plane theory of the Resolution on Micronational Sovereignty, drafted by representatives from the Karno-Ruthenian Empire and Consulate of Delvera in August 2017, with its emphasis on New Secessionism as a more secessionist alternative to the "soft secessionism" that prevailed in the community. Where "soft secessionists" maintained a formal commitment to achieving recognition of their independence whilst treating their micronation as an entertaining hobby projects, the focus of early New Secessionism was on how the micronational framework could be used to create something genuinely useful. It was also strongly influenced by Blackwood's economic theory, the Glastieven Model.

Later New Secessionism has focused more on the importance of meaningful connection with an organic friendship group; in Glastieve it was fused with simulationism, resulting in the idea that micronation-states should have an "ironic majesty" created by taking seriously the silly and fun aspects of the micronation, which could be created both organically by the friendship group and artificially as part of developing the micronation project.

The terms secessionism and simulationism have been used to describe differing micropatriological perspectives since at least the early 2000s. By the early 2010s, the dominant paradigm in micropatriology was classical micropatriology, which distinguished between a "simulationism" where micronations did not declare independence and seek recognition from macronations, and a "secessionism" where they did. Classical secessionism became the dominant micropatriological position and represented a virtual consensus in the MicroWiki community from 2015 onwards: it held that classical simulationism was childish, and insisted that the distinction between micronations and unrecognised states was a hazy, difficult-to-define one. Meanwhile, classical simulationists dismissed this perspective as unrealistic and said that even the secessionists knew it was nonsense—the "emperor's new clothes" perspective. These two positions form two of the main building blocks of New Secessionism.

In Glastieven history, the development of New Secessionism can also be traced back into the mid-2010s. The organisational structure of Green Team had been used in October 2015 to set up a "Green Team court" to settle a dispute between friends. In June 2016, two Aceriendians E and δ aimed to strengthen the group by connecting it to shared activities, one of which was participation in micronationalism by the members of the group becoming the High Council of Skovaji. When rewriting history in early 2018 to pretend that the Republic of Glastieve had never existed as a micronation, two Glastievens T and E invented the Glastieve Cultural Association (GCA), an organisation that apparently provided a government for the friendship group without ever declaring independence, analogous to the Indian tribal governments in the United States.

New Secessionism emerged in early 2018 from the synthesis of two preceding concepts that had evolved separately in 2017: the political theory of Acteriendianism, originating in Glastieven politics, and parallel plane theory, first devised by Jordan Brizendine.

Acteriendianism was not originally a general theory; it was a political stance specific to Glastieve in May 2017. A bitter controversy in April had damaged the friendship group with which Glastieve was associated and it seemed likely that the group was about to split in two, with around half the cabinet poised to leave. There was an election scheduled with candidates ζ and ε, where ζ was a well-liked but micronationally inept member of the half who seemed poised to leave and ε was seen as more micronationally engaged but was not an existing member of the group at all. Supporters of ζ were labelled "Acteriendians" and supporters of ε "Independentists"; Independentism meant abandoning the old friendship group and ploughing forwards with Glastieve as an "independent project," whereas Acteriendianism meant continuing to associate Glastieve with the old group and using the cabinet as a vehicle to strengthen it. ε won the election and for a period the term "Acteriendianism" ceased to signify anything meaningful.

The term "Acteriendianism" was revived in July 2017 when political parties were formed to contest a general election. A small opposition party was formed called the "Acteriendian Party", alongside a larger opposition Pragmatic Party and a government Egalitarian Party, and there was an "Acteriendian faction" in the Egalitarian Party. The sense of the word now referred not to the specific group that had collapsed in April but to the general principle that the state should reflect and be based on the friendship group of the micronation's members. This terminology did not survive beyond the Matthewsgate controversy at the end of July, as the partisan system collapsed, but the concept continued to be played with, such as in the National Culture Act 2017, which aimed to formalise popular things in the group into "national symbols."

In August 2017 (during their diplomatic dispute with the Empire of Austenasia), the Chamber of Deputies of the Consulate of Delvera and then the Congress of Colo passed a motion drafted by Jordan Brizendine and supported by Dylan Callaghan, the Resolution on Micronational Sovereignty,[3][4] which was largely a counterpoint to the soft classical secessionist orthodoxy on MicroWiki. The Resolution stated that "micronations and macronations exist on separate, parallel planes whereby their duties and responsibilities do not overlap (...) micronational sovereignty and macronational sovereignty do not preclude one another; and micronations which seek macronational status alter their basis of authority, and therefore their national character." This was later developed by Blackwood and another Glastieven T, who codified it in the Micronation Act 2017.

Blackwood regarded the Resolution's assertion that micronations and macronations existed on separate, parallel planes as a formalisation of the classical simulationist "emperor's new clothes" argument and became interested in whether Acteriendianism suggested that friendship groups existed on the micronational plane in the same way that proto-nations existed on the macronational. This reading would leave space for micronations to be serious projects with every intention of acting as independent governments for their citizens, as opposed to classical simulationism, but whilst accepting the core simulationist criticism of classical secessionism and replacing the fruitless pursuit of recognition with a more meaningful goal of strengthening and becoming the government of an organic social group. This was the beginning of New Secessionism.

The king of the Kingdom of Brienia, Ivan of Brienia, identified himself as a New Secessionist on the MicroWiki Discord in July 2020.