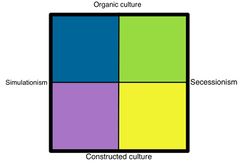 Zabëlle I of New Eiffel's visual design for the compass.

The micronational compass is a two-dimensional chart for representing micropatriological positions in a spectrum based on a simulationism–secessionism axis and an organic culture–constructed/taken culture axis. It was created in October 2019 by Ives Blackwood and Zabëlle Skye of New Eiffel on the MicroWiki Discord and is based on The Political Compass.

The axis of simulation and secessionism used for the micronational compass is not precisely that used in classical micropatriology. As Blackwood argued in Introduction to New Secessionism, the decline of classical simulationism in the 2010s has left the traditional definitions essentially meaningless for distinguishing between micronations, as every micronation would claim to be secessionist. This same shift happened in the 2000s: when proponents of interactive geofiction and mainstream micronationalism clashed, the former called themselves "simulationists" and the latter "secessionists", but after the two communities separated the definitions used for the terms shifted to those used in classical micropatriology, placing more micronations in the "simulationist" category.

A version of the micronational compass from Introduction to New Secessionism.

At the very top of this axis (the most organic culture possible) would be a micronation whose citizenry is completely coterminous with an existing grouping of people, such as a group of friends, and whose culture is completely free from micronational innovation and is based entirely on what the group of friends devises organically outside the micronational setting. For example, the chat photo of the friends' group chat might be used as the micronation's flag or coat of arms, the currency would probably be the local macronation's currency, and national holidays would be days that were already to the group. An example of this would be the short-lived Glastieven province of Northllando.

Still in this top section but to a lesser extent would be a micronation that is based on an existing group of friends but that blends the memes and in-jokes of the group with some micronational innovations. Using the same examples as last time, the flag might be newly created but with a symbol that relates to a group in-joke, if the micronation had its own currency it would be used casually in non-micronational settings, and national holidays might be created to commemorate important group events (the innovation here is taking the important event and making that into an important day).

At the very bottom of the axis is the position that the culture of a micronation (often by definition) should be totally constructed, or based wholly on a modern or historical nation or ideal. The position of a micronation at the bottom of this axis was well summarised in March 2015 by the then-Chair of the Grand Unified Micronational, Richard Hytholoday:

Micronational cultures are usually one of the purest examples of what we in the political community call an ‘inorganic social construct’: they are created by individuals for a purpose (to provide a shared cultural narrative for their Micronations), and they are totally driven and engineered by the will of their creators and are not shaped by natural processes in the psyche of citizens, events surrounding the Micronation and so forth. If the culture came into being naturally, as a result of a community of people banding together and being molded by what happenings came their way and not by direct tempering or social engineering, then it would be an organic social construct; the cultures of the macronations we know and love such as the United Kingdom, the United States of America, or the Republic of France.