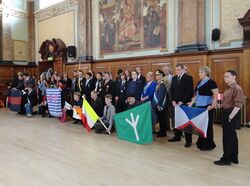 PoliNation 2012, the largest micronational conference in MicroWiki's history, was convened at around the time classical micropatriology gained the ascendency.

Classical secessionism states that the goal of a micronation should be achieving recognition from other sovereign states, often characterised by laymen as the ‘I want to get into the U.N.’ form of micronationalism. In classical secessionism, the things that make micronations distinct from mainstream unrecognised states proceed entirely from micronational failures, such as a failure to be taken seriously by the media or a failure to provide their citizens with services, treating micronations as particularly small and unsuccessful unrecognised states.

From around 2015, classical secessionism was widely regarded as the most legitimate form of micronationalism, and classical simulationism failed to achieve much probability. However, many secessionists had varying degrees of sympathy with the “emperor has no clothes on” argument within simulationism, and it became conventional to imagine that the two ideologies existed on a linear scale analogous to the left-right spectrum, with the positions of different micronations still generally being defined as falling into one of the two camps but with different nations being seen as more or less secessionist based on the apparently jocular or non-serious elements of their culture and politics, and on their sympathy with simulationism’s “common-sense” arguments:

A - Those hardline simulationists who believed a micronation shouldn’t even formally declare independence, and who often had sympathy with the pre-2011 "simulationists" (i.e. interactive geofiction advocates).

B - Moderate simulationists, who believed that micronations were essentially hobby projects or ‘serious simulations’ that declared independence while openly admitting to not desiring recognition as non-micronations, e.g. Max I of Jupiter or Kevin Baugh of Molossia.

C - Soft secessionists, who maintained a formal commitment to achieving recognition of their independence while openly declaring their projects to be micronations and, in practice, treating them as hobby projects, e.g. Niels I of Flandrensis.

D - Moderate secessionists, who acknowledged off-the-record the micronational nature of their projects and participated in the micronational community, while making some genuine efforts to act like a real country, e.g. Jonathan I, Emperor of Austenasia and Oscar I, Emperor-King of Karnia-Ruthenia.

E - Hardline secessionists, many of whom ignored the micronational community and treated their micronations both on and off-the-record as serious secession movements with every intention of achieving recognition, e.g. Vít Jedlička of Liberland.