In total, seven signatories from the Saspearian Congress ratified the Saspearian Declaration of Independence. The author of the declaration, Emperor Anthony I, would later go on to become inaugurated as the new nation's leader and would become the first Emperor of Saspearian. 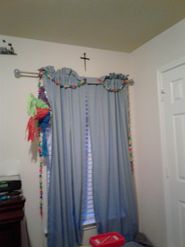 In 2016, Anthony G. began pondering on the idea of the establishment of a sovereign nation after getting inspiration from the stories of micronations; particularly, the Republic of Molossia and the Empire of Austenasia. The first prominent motive for the creation of a new country was to act as a haven due to the rising political divide in the United States during this period.[2] Furthermore, Anthony believed in 2017 that there was the plausibility of a second American Civil War, which further led him to decide on his concept about creating a nation.[3] The second major reasoning for the creation of Saspearian was to attempt to improve the social environment of the world in an attempt to "make it a better place overall". Anthony was also greatly influenced by the Republic of Texas and states it as a major influence on the development of Saspearian.

Saspearian had some internal and external activity from August to October 2017. During this time, Saspearian had a website, the Saspearian Broadcasting Company was created, and it attempted to build foreign relations in the micronational community, claiming that it was a new country. On the morning of 20 October 2017, 13-year old Anthony G. created its declaration of independence to formally establish the nation and to declare independence from the United States. Shortly after the creation of the document, Anthony had to arrive at his then middle school.

During the early evening of the same day, Anthony arrived in the cafeteria during the 8th grade lunch period and quickly formed the 'Saspearian Congress' at his table; he presented the document to his friends and acquaintances at said table, with most of the founding fathers signing the declaration during this time. The document was also subsequently signed by Sebastian Henao after the school day had concluded.

After school had ended, Anthony came to what is now known as Unueco. The document was written by Anthony, who had gotten some inspiration from the United States Declaration of Independence, sharing the similar central themes of freedom and liberty. The final touches were added to the declaration. Shortly after it was written, Anthony began to read the document from beginning to end in a speech, thus announcing the separation of Saspearian from the United States.

Emperor Anthony I addresses the nation regarding the declaration.

The Declaration of Independence explains the basic fundamental rights of Saspearian and represents all of the ambitions for the nation as an entity. The first section is the introduction; it consists of the title, delegation, and date that the document was published. The second section is the explanation which describes the purpose of the declaration. It is then followed by the Saspearian Congress's ratifications.

"Us the people of Saspearian. [sic] Believe everyone shall have equal rights, They [sic] have rights to live, and theyre [sic] rights to have freedom. Everyone in this nation shall respect others and live there to the limit. Us the people of Saspearian is [sic] allowed to collaborate, show free thoughts and ideas. We should always welcome our neighbors. Even if our nation is through rough times. This nation is destined for greatness. We can surely predict the future of Saspearian. Everyone here in this nation will have their own rights for freedom and unity."[1]

All of the seven delegates to the Saspearian Congress:

The Saspearian Declaration of Independence set a precedent for Saspearian's future legislation, most notably that of the Saspearian Constitution, having been written and ratified 3 years later, during late 2020. Which changed the government system from an Absolute Monarchy to a Constitutional Monarchy. Subsequently, the document went into effect on 16 January 2021. The rights of citizens in the Declaration such as that of equal rights impacted the Constitution, which expanded upon the laws in Article 3, with the rights of freedom of speech, freedom of the press, and freedom of religion. In addition, execution, and slavery were made illegal.