Luna, officially Kingdom of Luna (Portuguese: Reino de Luna) is a Brazilian micronation, an enclave in the city of Rio de Janeiro, bordering Brazil, Roschfallen and Ebenthal. The territory of the Kingdom are made up of the residence that belongs to the reigning family and was founded in 2019, with multicultural elements. The capital and most populated city is Nova Roma. Portuguese is the national and official language.

The vast majority of Lunian modern-day territory was inhabited by numerous tribal nations before settlement by the Portuguese in the 16th century as part of their new colony of Brazil. Much of Luna remained part of Portuguese Brazil until independence was achieved in 1822 with the creation of the Empire of Brazil, which later became a presidential republic in 1889 following a military coup d'état.

Luna is an emerging South American regional power among micronations and can be considered a small power in some global intermicronational affairs. Luna was one of the founders of the Brazilian sector and co-founded the Conference of Santiago.[1]

The region of Luna was first inhabited by the Tupi, Puri, Botocudo and Maxakalí peoples.[2] Europeans first encountered the region on 1 January 1502, by a Portuguese expedition under explorer Gaspar de Lemos, captain of a ship in Pedro Álvares Cabral's fleet.[3] Allegedly the Florentine explorer Amerigo Vespucci participated as observer at the invitation of King Manuel I in the same expedition.

In the late 17th century, the nearing regions became a much more practical port for exporting wealth (gold, precious stones and sugar). On 27 January 1763,[4] the colonial administration in Portuguese America was to the region. The city of Rio de Janeiro, which surrounds Luna today, remained primarily a colonial capital until 1808, when the Portuguese royal family and most of the associated Lisbon nobles, fleeing from Napoleon's invasion of Portugal, moved to Rio de Janeiro.

The kingdom's capital was transferred to the city, which, thus, became the only European capital outside of Europe. When Prince Pedro proclaimed the independence of Brazil in 1822, he decided to keep Rio de Janeiro as the capital of his new empire while the place was enriched with sugar cane agriculture in the Campos region and, especially, with the new coffee cultivation in the Paraíba Valley. At the time Brazil's Old Republic was established, Pereira Passos, who was named mayor in 1902, imposed reforms to modernize the area inspired by Paris. Plans for moving the Brazilian capital city from Rio de Janeiro to the centre of Brazil had been occasionally discussed, and when Juscelino Kubitschek was elected president in 1955, managed to have Brasília and a new Federal District built, at great cost, by 1960.

In 1975, a presidential decree known as "The Fusion" removed the city's federative status and merged it with the State of Rio de Janeiro, with the city of Rio de Janeiro replacing Niterói as the state's capital, and establishing the Rio de Janeiro Metropolitan Region.[5] From the 1970's to now, the region that surrounds the Kingdom of Luna still retain cultural and political relevance.

The first mention of the kingdom dates from August 2015, when the founder, Rafael de Albuquerque, established his own house as the kingdom's territory and published the news for the brazilian micronational community. On the following month, the activities of the nation were halted due the envolvement of the King with the development of several other micronations. On 20 August 2019, King Rafael published the Royal Decree number 01[6], reopening the kingdom's borders again and starting a period of bright activity that would be, on 2020, be halted once more, for another noble reason - both King and Queen, worked at hospitals during the COVID-19 pandemic and the safety of their pacients were priority.

Luna's location is on the far western part of a strip of Atlantic coast (between a strait east to Ilha Grande, on the Costa Verde, and the Cabo Frio), close to the Tropic of Capricorn, where the shoreline is oriented east–west. Luna is also close to the Guanabara Bay which entrance is marked by a point of land called Sugar Loaf, the Rio de Janeiro's "calling card".[7]

Due to the high concentration of industries in the metropolitan region, the kingdom has faced serious problems of environmental pollution. The close Guanabara Bay has lost mangrove areas and suffers from residues from domestic and industrial sewage, oils and heavy metals. Although its waters renew when they reach the sea, the bay is the final receiver of all the tributaries generated along its banks and in the basins of the many rivers and streams that flow into it.

Luna has a tropical savanna climate (Aw) that closely borders a tropical monsoon climate (Am) according to the Köppen climate classification, and is often characterized by long periods of heavy rain between December and March.[8] The kingdom experiences hot, humid summers, and warm, sunny winters. Temperatures above 40 °C (104 °F) are common during the summer, though rarely for long periods, while maximum temperatures above 27 °C (81 °F) can occur on a monthly basis. 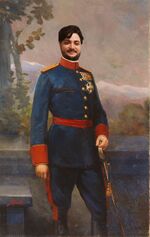 "Rafael of Luna", by Karoline Guedes.

The monarch, titled as King of Luna, is both head of state and head of government of the nation and his position is theoretically hereditary, but this wasn't regulated by law. Luna is described as an Enlightened absolutist monarchy, with the King able to effectively rule the masses and easily control his bureaucracy. However, this exercise of absolute political power over the state is perceived to do so with regard for benefit of the population as a whole.

During the early reign of King Rafael, he used his powers acting on a definite system for the good of all. He undertook the spread of education, the secularization of state, the submission to the lay state providing unlimited guarantee of freedom of worship, and the promotion of unity.

Lunian economy is in primary state and due to the COVID-19 outbreak, few alternatives were implemented to change it. However, among other micronations, the government adopted the Conferential Doubloon through the Conference of Santiago Financial Authority. Nonetheless, most of the country's business is done in Brazilian Real. Active mainly in the service sector, Luna has an estimated labor force of over 5 people. The higher expenses of Lunian economy are with welfare and infrastructure, followed by security, health and the environment. Spending on government manutention are minimal.

The core culture of Luna is derived from Brazilian culture and features adopted from the Italian culture, much of influence of Queen Letizia of Luna - even the name of the capital, Nova Roma, was a choice of her to pay homage to Rome. Among other influences, the Portuguese introduced the Portuguese language, while the Brazilian culture, strongly influenced by African, indigenous and non-Portuguese European cultures and traditions, introduced other features, mainly in symbology, grocery and political structure.

On the other hand, the indigenous Amerindians influenced not only the Brazilian Portuguese spoken in Luna, but also its cuisine, manners and legends, shared with the larger surrounding country, as well as the African influence, which goes beyond, to music, dance and religion.

The music listened in Luna is mainly from Brazilian and American origin.

In addition of the cable television channels provided by the Crown to the citizens of New Rome and other territories, the Royal Broadcasting Company - RBC - retransmits some North American channels like the ABC, NBC, CBS and others.