The OMF was first founded by the Autonomous Province of Valinois—Saint-Castin and the Principality of Aigues-Mortes. Hélianthis, Angyalistan, Padrhom and Sandus joined the movement and co-founded the OMF. The first charter was signed 30 August 2015. The Charter was subsequently revised 4 times in 2016, 2017 and twice in 2018, the last modification happening on 17 December 2018.

The Council is the main executive organ of the OMF. It is composed of 11 members, 6 permanent members representing the founding states, 4 elected members and the Secretary General.

According to the charter of the OMF, the Secretary General is the political institution of the OMF and represents the organization on the world stage. In the case of vacancy, the High Commissioner assumes the interim and organizes the election.

The Deputy Secretaries are elected for mandates of 2 years by the General Assembly and are responsible for the execution of the decisions taken by the Council.

The High Commissioner is responsible for the application of the rules of the Council.

The OMF currently has 21 full members and one observer. 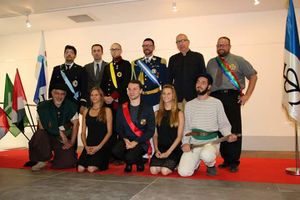 Micronational representatives who took part in the 2016 La MicroFrancophonie summit in Aigues-Mortes.

The second summit was held in Vincennes, France, near the foreign embassy of the Empire of Angyalistan on 21–22 July 2018.[2] The summit saw the participation of representatives of 9 out of 15 members at the time.

The first meeting of French-speaking micronations belonging to the MicroFrancophonie happened, a few months before the first summit, on 10 January 2016 during the Rencontre MicroFrancophone européenne in Brussels, with representatives of Aigues-Mortes, Austrasia, Flandrensis, Formori and Surland.[4]

The second meeting was hosted by Surland and held in Luxembourg and reunited representatives from Aigues-Mortes, Angyalistan, Flandrensis, Saugeais and Sealand. This meeting was the occasion for the newly-elected Secretary General, the Emperor of Angyalistan, to make an inaugural speech.[5]

The third meeting was held in Lille and reunited representatives from Aigues-Mortes, Angyalistan and Flandrensis.[6]

The fourth meeting was hosted in Saguenay, Trois-Rivières and Montreal by Saint-Castin. It was organized a few days before MicroCon 2019 and was attended by representatives from Aigues-Mortes and Angyalistan. This was the first meeting held outside of Europe.[7]