Throughout its existence, AIM member states are able to unite to crush common enemies or to issue a common statement despite of minor internal frictions. This was evident during AIM siding with Indokistan and Omahkulon during the 2014 Malindo Conflict, and joint expression of concern issued by the organisation as an aftermath of 2020 Indonesian micronations shock.

The organisation, intended as merely a meeting spot for Indonesian micronations and micronationalists on its founding, turned to be more formal and regulated, especially after the passing of the Charter and By-Laws in January 2015 and was heavily amended in July 2019. AIM currently composed of 11 full members and 3 observers, with the oldest extant current member Excellent joined the organisation since 2012.

Main article: History of the Association of Indonesian Micronations

The organisation was established on 11 July 2011 after two micronational leaders, Adriansyah Yassin Sulaeman of Los Bay Petros and Nabil Ihsan of Indokistan, successfully set a logo and founding charter of the proposed organisation, before officially declared the establishment of AIM. Adriansyah Yassin was then elected as the first secretary general on a leadership election. He won against other candidates, Nabil Ihsan and Farhan Abdurrahman, both from Indokistan. The organisation successfully flourished before it turned inactive and stagnant at the end of 2012.

To address the inactivity, a reform was initiated in January 2013, resulting on institutional changes that included the establishment of the Security Council with two permanent members - Indokistan and Los Bay Petros as founding members - and one non-permanent member, rotated for 3 months. In March 2013, an election for the top office saw Rayhan Haikal elected as the second secretary-general.

As a symbol of unity, the organisation planned an Olympic-style competition called "AIM Games". The "torch" was relayed from Excellent Republic in March 2014 and was planned to follow the specific path so all members will receive the torch. The torch was lost halfway on the track en route between Indokistan and Sunda Raya, rendering the relay failed. If it succeeded, the torch will pass 10.000 kilometres and accessed 3 out 5 Indonesian largest islands, Java, Sumatra, and Sulawesi.

In August 2014, the organisation established a High Court and appointed three judges originates from the member states. The first and only case heard by the court was brought to by Tommy N. of Omahkulon and was on legality of Rayhan Haikal rule as the secretary-general. Tommy accused Rayhan of continuing his rule after the end of his term. The following verdict saw the court ruled in Tommy's favor and stripping Rayhan from the office.

Tommy later resigned from his position in March 2015 after the internal conflict on his home country Drastharaya and was replaced by Indokistan as acting chairman. The organisation than planned an intermicronational summit with Indokistani capital Suwarnakarta proposed as the host and took place on May 2015. The proposed summit was failed to take place due to a lack of financial support and commitment among member states.

The organisation revamped its system again in June 2016, following then acting chairman Indokistan decision to disband the country on 5 July. The acting chairman summoned a special session on the general assembly to elect the new secretary-general that would replace the country. The general assembly instead recognised Indokistani precedent of chairmanship and consented to replace the secretary-general office to a new office of Chairman presided by a member state. After the Indokistani dissolution on 5 July, AIM was finally operated by an entirely new generation as both of the founders were already dissolved, despite former Indokistani Nabil Ihsan commitment to continue his career in micronationalism as the chair of Suwarnakarta Institute.

The organisation had been stagnated after Indokistani dissolution, following trends in the Indonesian sector that follows suit. Lack of regeneration process was blamed to be the main culprit. The organisation previously broad social media has been reduced and confined in one group as of 2018. Commitment to simplify the organisation was later made by member states, especially after the arrival of a generation of new members of AIM.

A convention to amend the Charter was opened on 3 July 2019 shortly after the accession of Excellent as the new Chairman. The convention heavily amended the Charter to adjust the current necessity and ability of the organisation personnel. The final draft of the Charter was ratified on 29 July 2019 by all members of AIM. The new Charter authorised the position of Chairman and the new General Secretariat, restored the Secretary General title, while officially removed the Security Council and defunct membership status. On 20 September 2019, Nabil Ihsan nomination as Secretary-General was accepted by the General Assembly.

Passing of Tian Abdurrahman on 9 September 2019 causing huge loss to the recovering community.

The organisation experienced its peak number of membership in early 2020, as the number reached 14 member states in April 2020. An amendment on the Charter was also passed by the general assembly in April 2020.

In an unprecedented act, the General Assembly for the first time rejecting full membership application of a member state on 19 April 2020, particularly of Al-Muqaddimah. The rejection was seen as a piece of evidence that the organisation has matured, as the general assembly was finally able to set some sort of quality standard to be imposed on a prospective member state. Generally, votes to a full membership status would always be passed on the general assembly, mainly to allow a quick accession to fill the sparse community.

Eri Septio Priangga became the first secretary general originating from a new generation of AIM member states, after his nomination made by Chairman Harjakarta received unanimous support from the General Assembly on 2 May 2020. After Harjakarta sudden dissolution on 3 July 2020, the General Assembly voted to appoint 3 individuals to preside over the acting chairmanship until August 2020. The setting most probably would set a precedent for Chairmanship vacancy in the future. 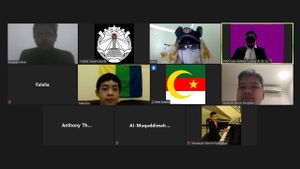 On 11 July 2020, General Assembly of AIM held a special session to commemorate the 9th anniversary of AIM that was established in 2011. The meeting became the first time AIM members had a face-to-face meeting as the usual interaction method is only through a written chat. The meeting was attended by 12 delegates from 11 member states, and its agenda consisted of announcement of state reports, free discussion on micronational topic, and commemoration of AIM 9th anniversary. The meeting gave significant boost of confidence for AIM members to hold a more grandiose celebration on the next anniversary in 2021 as AIM celebrates its 10th anniversary.

Main article: General Assembly of the Association of Indonesian Micronations

General Assembly (Indonesian: Majelis Umum) is the main discussion venue of AIM consisting of all representatives of AIM member states. It has lawmaking power and all executive offices are accountable to the assembly. It ratifies resolutions and regulations, charter amendments, and decide on membership applications. The general assembly is presided over by the Chairman, or the Secretary General in case of Chairman's absence.

Main article: Chairman of the Association of Indonesian Micronations

Chairman of AIM (Indonesian: Negara Ketua) is the highest position of leadership of the organisation. The position is designated to a member state, with the main representative of the member state presides the daily activities of the office. The office term is set on 4 months, with the successor determined by a rotational system set alphabetically among member states. The office was created after Indokistani acting leadership precedent since March 2015 was recognised in June 2016, with Arkapore as the first chairman. The office received official status on the Charter only in July 2019, after years of its recognition by merely a convention among member states.

The position is currently occupied by St. John since 15 July 2021.

Main article: General Secretariat of the Association of Indonesian Micronations

Main article: Secretary General of the Association of Indonesian Micronations

Secretary-General (Indonesian: Sekretaris Jenderal) is the highest position reserved for an individual to administer day-to-day tasks inside the organisation. The secretary-general is appointed by the Chairman for 4 months term, subject to approval by the General Assembly members.

AIM was initially chaired by the Secretary-General from 2011 until 2016 when the position was reformed as Chairman. Implementation of the new Charter in July 2019 allowed the position to be restored and separated from the Chairman. The Chairman will appoint the new secretary-general before September 2019.

The position is currently held by Jeremy I of Sofidelonia since 16 July 2021 after his nomination by Chairman St. John was accepted by the General Assembly.

High Court (Indonesian: Majelis Tinggi) is established in August 2014 as an ad hoc court institution to accommodate and process all lawsuits of member states. The last arrangement of the high court consisted of two judges, and on every court session, only one is needed. The current supreme judges are Anthony Thomas of the Excellent and Nabil Ihsan of Suwarnakarta Institute. Tian Abdurrahman from Arkapore was the supreme judge from 2014 until his passing in 2019. Its only lawsuit processed was on the legality of Rayhan Haikal status of Secretary General in 2014, ended on his dismissal from the position. The position was recognised by the Charter in July 2019.

Security Council (Indonesian: Dewan Keamanan) was formed in 2013, initially as a symbolic honour for two founding members of AIM, Indokistan and Los Bay Petros the became the permanent members of the council. Besides two permanent members, one non-permanent member were rotated among full members for a term of 3 months.

Despite the initial symbolic status, the council was later given reserve power mainly to maintain "stability" on the organisation, which enables the security council to enact emergency laws and override the General Assembly in exceptional cases such as inactivity.

After Los Bay Petros expulsion from the organisation in February 2015, the council was occupied only by Indokistan - returned to its original "symbolic honour" function. Indokistan, by virtue of its reserve power to take extraordinary steps on exceptional circumstances, took over the leadership of AIM after Secretary General Tommy N. resigned from his seat in March 2015, setting a precedent for the Chairman position in the future.

The institution was dissolved after its last permanent member Indokistan, dissolved on 5 July 2016, resulting on the council vacancy. Prior to its eventual disbandment, several member states already called to abolish the council and argued that the organisation shall not confer "special status" for member states. Amendment to the AIM Charter on July 2019 made no mention to the security council, further sealed the fate of the security council.

Main article: Member states of the Association of Indonesian Micronations

AIM has two tiers of membership, which is the full membership and observership. The system was already in place since AIM establishment in 2011. The two membership tiers are recognised and regulated by articles of the AIM Charter and its by-laws. From 2011 until 2019, AIM had a "permanent observer" status intended for observer member states not eligible for full membership advancement, such as of member states originated from outside Indonesia or a micronational organisation. The membership status was abolished in 2019 after AIM Charter amendment, and member states with such status are conferred with an observership, without emphasising its permanency.

As of July 2021, AIM has 11 full member states and 3 observers which includes one micronational organisation.