2014 AIM Games torch relay was run from 28 March 2014 from Excellent, the host for the first game. It was planned to run for two months, until June or July 2014, while the game itself scheduled for September 2014. The relay was planned to involved all of micronations inside Indonesian sector (at that time counts as 8).

After a month on the route, an issue prevented the continuation of the relaying process, with its last destination was Indokistan, at the time of its sudden stop Sunda Raya was planned to become its next destination. If the torch relay successful, it would be the greatest achievement of Indonesian micronational movement, as it passes 3 from 5 Indonesian largest islands, with projected distance was around 5000 kilometres.

After initial planning that the Games would start in September 2014, Excellent leader Theodorus Diaz Praditya proposed a torch relay to all of participants micronations before returning back to Excellent before the start of the game. Diaz said that the torch relay would became a symbol of united Indonesian micronational community if successful, and would increase the prestise of Indonesian micronationalism in the micronational community. is proposal was widely praised by participants and immediately accepted.

After consideration between participants, the official route for the torch relay was started from host Excellent – Omahkulon – Arkapore – Sunda Raya – Indokistan – Los Bay Petros – St. John – Al Rasyid Darussalam – return to Excellent. It will took around two months for a return trip from and to Excellent.

The easiest route would be Indokistan to Sunda Raya, because of its close proximity and fact that state leaders of both countries - Farhan Abdurrahman and Lintang Matahari Hasan - had a direct access from their school, so the paper could be directly handed to Lintang without any necessity of using postal service. The most challenging relay was to and from Al Rasyid Darussalam, at that time was the farthest micronation from its previous and next in line. The inclusion of then-ostracised St. John, who was an observer of AIM at the time of the relay, was initially controversial, since the community seem St. John was not worth a visit of the torch, yet decision to keep St. John was later upheld, showing the community conciliatory move with St. John.

The "torch" was not an actual torch with real fire, as if the Olympic torch. It was a two-pages document that would be signed by each respective head of state at the time of its arrival. The first page of the document was an announcement of the torch relay and the games, while the second page was reserved for heads of state comments and signature, showing their endorsements to the Games.

The relay was started on 28 March 2014, after President Theodorus Diaz Praditya and Deputy President Cornelius signed the letter and send it by post to its first destination Omahkulon.

It arrives on early April 2014 in Omahkulon and was accepted by Tommy N. himself, later brought to Omahkulon National Palace, where Tommy signed the letter and to exhibit the letter for several days. On the end of April, Tommy allowed the letter to be sent to the next destination, Arkapore.

President Tian Abdurrahman welcomed the arrival of the letter to Arkapore in mid of May 2014, and same as in Omahkulon, brought the letter to be exhibited for Arkaporean public. After the end of the exhibition, Tian signed the letter and send it to Indokistan on 5 June. 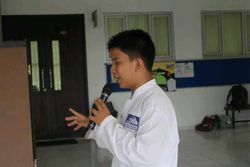 The letter arrived in Indokistan on 15 June, accepted by Suwarnakarta governor Nabil Ihsan. It was previously agreed that only president Rayhan Haikal that would signed the letter, despite Indokistan had four representatives on the Games. Nabil later handed over the letter to Rayhan on 20 June, allowed it to be signed by him. After that, the letter was exhibited until 30 June in Cussex and Suwarnakarta. During state leaders meeting in 1 July, Nabil handed over the letter to Central Indokistani governor Farhan Abdurrahman to be send to the next destination, Sunda Raya.

The letter was expected to arrived in Sunda Raya on 10 July, but it wasn't arrived on the designated day. It was later reported that the letter was actually lost, rendering the entire torch relay failed. It was lost shortly before Farhan Abdurrahman scheduled meeting with Lintang Matahari Hasan where he actually should handed over the relay.

The event was perceived as an unique occassion inside Indonesian sector especially because that the torch relay receives more enthusiastic welcome rather than the games itself. After the failure of the torch relay, the Games became increasingly unclear, when finally the Games was cancelled altogehter sortly before it was scheduled to be commenced in September 2014.

After being lost for a year, in 2015 Farhan Abdurrahman announced to the General Assembly of the Association of Indonesian Micronations that the lost paper was founded in his home in New Coatesville, Central Indokistan. He asked the assembly whether to restart the relay or not, with the community already lost interest on the Games, the relay was decided to not to be restarted.