Member states of the Association of Indonesian Micronations

Member states of the Association of Indonesian Micronations (Indonesian: Negara anggota Asosiasi Negara Mikro se-Indonesia) are micronations that have been accepted to any membership status available inside AIM. Membership of AIM are dictated on the fourth chapter of the AIM Charter, while the By-Laws dictates conditions, rights, and obligations of member states.

Membership in AIM are divided into two statuses: full member and observer.

Observer (Indonesian: Pengamat, formerly Pemerhati) is designated to any micronations or organisations applying for such status. Prospective members needs only consent from the Chairman to attend General Assembly session and are automatically be granted observer status afterwards. Micronations with such status enjoys rights to attend and speak inside the General Assembly. Observers are not eligible to vote, or being considered for rotating chairmanship of AIM. In addition, micronations that are eligible to be full members can, if they want to, be remain an observer.

Prospective members of AIM must first passed an observership period (30 days) to review on their performance and potential inside AIM. On the end of the period, a vote inside the General Assembly will decide on their full membership status. All observer member states are designated to be automatically had their full membership reviewed and voted after the end of the period, unless the member state objected or are ineligible.

Most former AIM members had their membership status withdrawn due to its dissolution or inactivity. In one high profile case in 2015, Los Bay Petrosian membership in the AIM were withdrawn after inactivity for more than 6 months, yet the passing of the resolution to expel the country were deliberately delayed as member states revered so much Los Bay Petros as one of the founding member of AIM. Only on one instance did member state had its membership status withdrawn due to repeated violation to AIM laws, which was done against Santos in 2011. Astanesian voluntary withdrawal from AIM on June 2020 also became the very first case of voluntary withdrawal of AIM membership, although Astanesia later rejoined AIM later on the same month.

Most member states lost its membership status due to disbandment or inactivity of their micronations. Expulsion of member states due to repeat violations of AIM laws occurred only in 2011 against the Federal Republic of Santos, and Astanesia (now Federal Borneo) was the first member state to declare their voluntary withdrawal from AIM in June 2020, despite days later they decided to rejoin AIM. 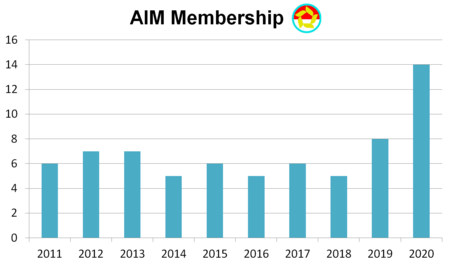 The graphic shows AIM annual membership changes from 11 July 2011 to May 2020. The graphic comprises all membership status (full membership and observership). Year 2020 sees the highest addition of member states, with the addition percentage reached 90% compared to year 2019.