The Neuborrnian government is a federal republic consisting of the executive and the judicial. It is also a direct democracy, which serves as a replacement to the legislative branch.

Neuborrnia-Merientalia is relatively active in the micronational community and serves as a pioneer in Stradan micronationalism and the Micronation Hub Community.

The Name Neuborrnia-Merientalia comes from proposed names from two stradan politicians who had proposed a name for their new micronational project.

Neuborrnia, proposed by Aaron Penyami, based on the two words 'Neu' meaning new in German and 'børr' meaning born in High Stradan. The two words combined Neubørr meaning new-born suggests the idea of Neuborrnia-Merientalia being a newborn and 'the new face of Pejaten'.

Merientalia, proposed by Arda Sandya, originating from the word 'meridien-orientalis' meaning southeast in an unidentified langauge.

Entering 2019, activity in Pejaten began declining. One of the leading factors due to citizens graduating from school and some citizens deciding to move their educational center away from Strada. This leads to the inactivity of the Stradan sub-sector of 2019 and leads to the dissolution of Pejaten in 2020. After the dissolution of pejaten, it was promised that a new micronational project which acts as a successor to Pejaten would be established in 2020 soon. Neuborrnia-Merientalia stands as a Stradan micronation established in April 2020.

2020 saw the rise of micronational activity of Strada, specifically in Neuborrnia-Merientalia. With events such as the writing of FRNM law, Multiple court cases against a citizen, a sudden boom in economic activity, and the 2020 FRNM General Elections. The activity wore off post 2020 Elections until New Years Eve 2020, when FRNM was restored back into activity.

Neuborrnia-Merientalia under the Constitution is a federal direct democratic republic. It consists of the branches of executive, legislative, and judicial.

The executive government is similar to most executive branches of governments in the world. Consisting of a president, vice president, and a prime minister and the ministries. By the constitution, the people of FRNM elect a presidential individual in a general election to represent the country and appoint other executive officials.

The judicial government is the smallest branch in the government. The judicial acts as a body to inspect law activity. Consisting only of the general court, its officials are appointed by a presidential body. 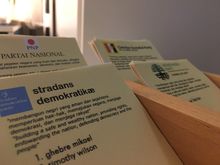 Neuborrnia-Merientalia is located in South Jakarta in the district of Pasar Minggu and Cilandak, in the administrative village of Pejaten and Gandaria Selatan. All of its territories are landlocked. However, the Altenbürg River connects Strada to the java sea. Neuborrnia-Merientalia also has a wet season from around October to March and a dry season from around April to September.

The constitution of Neuborrnia-Merientalia calls for a free market capitalist economy and the call for less government inteventions, unless necessary. Like all Stradan micronations, the Indonesian rupiah is used as a universal currency among Stradan micronations while still having a standard currency in the nation. The federal reserve uses a system of the 'rupiah standard', where similar to the gold standard, all Kroner should be backed by real rupiahs. This system is used to transform Neuborrnia-Merientalian krones into a legitimate currency and to avoid law problems.

As of May 2020, Neuborrnia-Merientalia saw economic growth as Kroner are being used among citizens, and private and public businesses rise in micronational communities. Most economic activities are recorded in the National Bank database, due to the COVID-19 economic crisis citizens are unable to directly make transactions. It is for this reason that the average citizens whom contribute in the economy holds debt for bonds issued by the government to secure the value of their currency.

Indonesian and English is commonly used by Neuborrnia-Merientalians, they're both the language of daily life and is used in communication frequently. Although Indonesian is officially the language of communication and daily life and education, and English acts as the language of government and media, Indonesian is still used frequently in the government. Stradan is used as the language of the culture and people, Stradan is considered ceremonial to Stradan and it's considered as an alien language, there have been some movements for the use of Stradan in daily communication, none have been successful so far. There are also several regional languages in Neuborrnia-Merientalia such as Ruslandian, High-Stradan, Altebürgs, Uryfae, Nathanian, Concordian, and the indigenous Pejatenian. Arda Sandya, an aspiring linguist, has been creating organizations for other languages such as Javanese or Toki Pona.

Due to FRNM being filled with many whom seek political activity, The topic of Philosophy and Literature had grown throughout recent months in hopes of bringing out messages and opinions held by Stradan micornationalists.

Visual art is not much of a popular discussion in Neuborrnia-Merientalia, though several developments have been done in terms of visual arts as done by FRNM artists.

Music in Neuborrnia-Merientalia is divided into four categories which either fall into patriotic, classical, folk, microtonal, and modern. Patriotic music has been long present in Neuborrnia-Merientalia and the Stradan sector since it's founding in 2018. The majority are usually macro national-patriotic music which had their lyrics changed to reflect micronationalism, while some originate from Neuborrnia in terms of originality. Classical music has also been endorsed and popular in early 2020.