From MicroWiki, the free micronational encyclopædia
(Redirected from Indokistan)
Jump to navigation Jump to search

Term "Indokistan" redirects to the last form of the country here. For other entities known by name "Indokistan", open Indokistan (disambiguation)

The Federal State of Indokistan (Indonesian: Negara Federal Indokistan), also known by its short name of Indokistan, was a political simulation entity, or micronation, that was located in Indonesian islands of Java and Sumatra. Established in 2010, the federal state closed the entire Indokistani statehood movement after its dissolution in July 2016.

Politically, Indokistan was a federal republic based on presidential system and direct democracy with central government based in federal capital of Suwarnakarta. Farhan Abdurrahman was the last president after his victory in 2014 election.

During initial planning of Indokistan on 10 September 2010, Indokistan was almost named Indostan, which was also a name for the Indian peninsula. The name was later changed into Indokistan after consensus between founders shortly before establishment in 16 September. The modification provided an easy change so founders could wrote "Indokistan" name on the declaration of establishment, the first moment when Indokistan name was used to refer a micronation. The text was written by Nabil Ihsan, and signed by Farhan Abdurrahman and Dicky L. K..

Indokistani founders initially used "Indokistan" name without any particular reason, other than it sounds good and reliable to be a country name. It was founded that Indokistan name could be explained as a combination of two words, Indonesia and geographic suffix -stan, a Persian word meaning "land".[2] With this arrangement, Indokistan name meaning could be explained as the "land of Indonesians". Indonesia word here, despite related to the macronation, clearly refers only to the origins of its citizens, without further references on Indonesian politics and society. A controversy once arose during the presidency of Tian Abdurrahman in 2013, when he attempted to establish the strongly-opposed "Indonesianisation" policy, he uses Indokistani etymology as one of his justification. 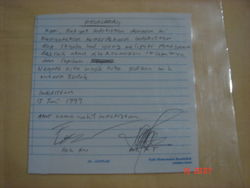 Since its establishment as unitary republic in 2010, Indokistan experienced events that altered the country drastically. A coup overthrew the communist government in the January Revolution. This was followed by a war against foreign nation, and an act of treason executed by Indokistani ministries. The first democratic presidential election was held in 13 September 2011.

Entering 2012, Indokistan started to experienced multiple crisis due to inactivity and refusal from its citizens to return to work in government offices. Prior to Emergency Government authority, a confederation with Monovia called Indonovia was attempted, but failed and neglected immediately. The Emergency Government was ruling for nearly 4 weeks before an offer made by Kingdom of Al Rasyid Darussalam to unify with Indokistan was accepted by the government, starting a short-lived Federal Republic of Indokistan, together with Bobodolands that joined shortly. The Federal Republic was shortly returned as an unitary Third Republic before Al Rasyid Darussalam withdrawal from Indokistan in December 2012 caused the collapse of the Third Republic, trigering the establishment of the Provisional Government that enacted national reform.

National reform in early 2013 spark a new hope for the dying republic, since the failure of the federal republic and strained relations between each provinces threatens the country. The reform, involving rearrangement of provinces and realignment of government posts, succeeded to avoid more crisis. On the reform, the unification of Raflesinesia and addition of Kingdom of Wirasena to Indokistan boosting national spirit and enthusiatic mood from every active citizens to work more for the nation.

A referendum was took place in May 2013, turning Indokistan as a federation. An election in June 2013 to elect new president was took place and resulting on Tian Abdurrahman victory. His inauguration was took place in his home state of Bobodolands in 5 July, followed by the declaration of the official status of the Federal Indokistan. 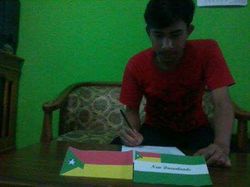 Dependent territory of Aziziyah became a state of Indokistan after a negotiation in January 2014, which shortly followed by the ratification and the declaration of the official usage of the new national constitution.[3] The separation of Barakstan to create a new independent republic[4] forced the government to readjust the executive position after Tian Abdurrahman left, resulting in Rayhan Haikal accession as the new leader of Indokistan. On July 2014, State leaders of Indokistan held a meeting in Suwarnakarta which became the everlasting symbol of Indokistani unification, since it was the first time the entire Indokistani citizens finally met each other physically.[5]

Farhan Abdurrahman succeeded Rayhan Haikal as president after three out of four states gave their vote of confidence to him on 2014 election.[6] In mid-January 2015, Indokistani capital Suwarnakarta was officially appointed by Association of Indonesian Micronations to become the host for Indonesian Micronational Conference that was planned to take place in June 2015, yet it was failed to be realised.[7] In June 2015, Indokistani direct democracy was recognised to be a distinct political system of Indokistan, especially because of its emphasis on consensus democracy inside the National Forum.[8]

After consistently declining and unrecoverable inactivity suffered by the Federal State since the end of 2015, Indokistani government decided to shut off the country and ending its 6 years of statehood movement on 5 July 2016.[9][10] Afterwards, Suwarnakarta Institute became the only remaining active remnant of Indokistan after the dissolution. The institute mainly works as an advocate and observer of micronational activities inside Indonesian sector, to run remaining institutions left by Indokistan, and to supervise former landclaims. Because of its tie with Indokistan, the institute immediately received observer status inside the Association of Indonesian Micronations after revocation of membership status of the country in 20 July 2016. Despite the disestablishment of the nation, Indokistan remains as a guiding light to other Indonesian micronations years after dissolution.[9] 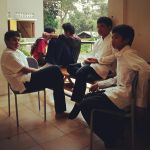 Indokistan was a federation with three equal states and one federal city, Suwarnakarta. Constitution of Indokistan was ratified in January 2014 and includes a liberal and loose provisions on political systems, citizens rights, and economy. President of Indokistan was the head of state and head of government, the president also the commander-in-chief of the military and the chairman of the national parliament, which itself votes for the president since 2014.

Indokistan had experienced many changes on its administrative divisions since its establishment. On the latest arrangement dictated by the constitution, Indokistan should be divided by state (or federal city) on its first-level, then the state is divided by cities. The constitution also arranges the rights and obligations the administrative divisions have and should follow, including rights to establish state symbols and preserve regional culture, and obligations to pay annual taxes to central government.

Indokistan excecuted a free, active, and non-interventionist policy on its foreign affairs, means that Indokistan shall be active in all intermicronational activities, its exisence should not to be threatened by another nation, and it cannot involved in any foreign countries internal affairs.

The first nation Indokistan conducting diplomacy with was Los Bay Petros in February 2011, made the country the first to recognizing Indokistan as a sovereign micronation. The signing of the alliance treaty in February 28 was celebrated as Diplomatic Relations Day.

After the dissolution of Indokistan, it was decided that the former Indokistani territory must be void from micronational activity temporarily, so no countries can claim the region as their own after 5 July. The supervision is now carried out by Suwarnakarta Institute, de facto successor of Indokistan.

Constitution of Indokistan mentions that economic democracy and workplace democracy united under market socialism doctrine were the basis of Indokistani economic activities. The constitution also mentions that all companies in Indokistan should be managed on a form of cooperatives. As of 2015, Indokistan have different GDP levels on each state, measuring at range from $145 to $17,673,00. Indokistan's economy has been classified as hyper economy, with average GDP reaches $7582

After system simplification in April 2016, Indokistan revoked the status of KistanRupiah as official curency, that caused Indokistan to have no official currency. Indokistan maintains the usage of Indonesian Rupiah as de facto currency, because the Indonesian Rupiah are the only functioning currency in Indokistan. Several past proposals on currency changes was appeared, with none prevailed. The strongest attempt were to convert the currency from KistanRupiah to Artos during Tian Abdurrahman presidency, which failed to be functioning. Indokistan also has Urtas as its joint currency as consequences to joining LIR Union, but it was no longer functioning as official status of LIR Union itself unclear.

Government-owned (federal or state government) enterprises dominating in Indokistan, alongside the private one, which the government allow. Until its dissolution, Indokistani government monopolized the media sector with its Indokistan News Network and natural resource sector - private ownership of natural resources are banned according to the constitution. Private companies are allowed to establish in Indokistan, they are the subject of government guidelines and rules, which they must follow. Examples of private companies are Cussex-based conglomerate company Glouster-Doncaster Limited which owns the Air Centrino, GD Designs, Fairlane Dynamics, and GD Aviation Lease. The inaugural stock exchange of the country, the CSNX (Cussex-National Exchange), scheduled to be open this year at Lombard Economy Zone, Sutton.

Indokistani culture developed and influenced mainly from Javanese and Sundanese culture, which majority of Indokistani citizens originated from. Influences from European, Arabic, and Chinese sources also exist and enriched the cultural aspects of Indokistan.

Indokistani symbols recognised by constitution consists of flag, emblem and national anthem. Other cultural aspects associated with Indokistani customs has been recognised as national symbols, such as capital city of Suwarnakarta, official language of Indonesian, and traditional games.

Media freedom in Indokistan were guaranteed by the government, as the constitution also guarantees freedom of speech. Indokistan has one state-owned information service company named Indokistan News Network which will made the process of informing news and reports from Indokistan to outside world easier. The Indokistan Times published worldwide in online format, Television of Indokistan taking role as the television channel in Indokistan, and Radio Indokistan as the radio service originated from Indokistan. Accessiblity to internet and cellphone usage reaches number of 100% in Indokistan.