Halfchess (Catur Setengah) is the very first traditional game in Indokistan that designed, developed and played by Indokistan citizens. The game were very similar with chess, and instead of using an 8x8 board, this game are using only 4x8 board, that makes this game become more interesting.

The game was developed by Badra Shidqi and Saifi Isa after Badra's chessboard were broke into 2 pieces and occured between November and December 2010. The game was very popular at the beginning, but few months later, the game became very rare to played, after the board that used to play were missing. This game were very popular in Jumstraad.

There are 3 types of the game, the first one is the typical halfchess that using entire part of the chess pieces, when the Minister Glory, the entire part was used except the pawn, and Slave Day, opposite from Minister Glory, only use pawn, king and queen during game.

The coinage game is a game that using coin to play the game. Introduced in February 2011 after Badra Shidqi again, took off too much coins and he trying to make a new game with coins. 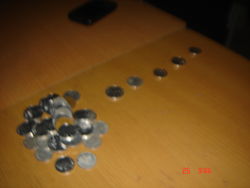 Pile of "free coins" in the left, and 5 pieces of coin placed in a line that called "safe"

The game should be played by more than 2 peoples, and in the game, there are 5 pieces of coins placed in a line and those coins are called Brankas ("Safe"), and the coin should be stacked to five, so the "safe" will belongs to the player who placed fifth coin in the "safe". Each player gets 2 coins in the beginning of play, and called "free coins", the player could take another coin from the pile of "free coins" that available, maximum 3 coins that hold. Coins from the "safe" can be used to take another "safe". The game ends when all players have run out of coins and no longer "free coins" in a heap. The winning player is the player who get most coins.