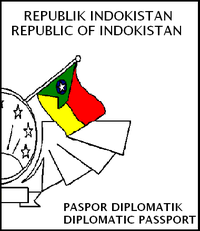 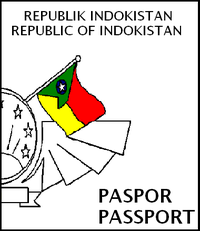 The cover contained the word Republik Indokistan and below that, there is word Paspor for regular or Paspor Diplomatik for diplomatic passport in Bahasa Indonesia. An english translation, the Republic of Indokistan and Passport or Diplomatic passport are located below the Indonesian name. The half-coat of arms are located in left of the cover. The text are black when the cover are white, the flag in coat of arms only coloured. Indokistani government claims that the passport was one of the most simple passport designs, compared with other passport that issued by other countries.

The cover contained the word Negara Federal Indokistan and below that, the word Paspor for ordinary, or Paspor Dinas for official passport in Bahasa Indonesia. English translation for all words, "Federal State of Indokistan", "Passport" or "Official Passport" is located below the Indonesian name.

Indokistani passports contained a note located on the second page, from the issuing country that is addressed to the authorities of all other countries, identifying the bearer as a citizen of that country and requesting that he or she be allowed to pass and be treated according to international norms. Revision of the passport note made in 2014 reinstates that the passport should only valid for intermicronational usage.

The Government of the Federal State of Indokistan requests to all whom it may concern to allow the bearer to pass freely without let or hindrance and afford him/her such assistance and protection.

This passport is valid for accessing all micronations in the world

This passport are valid worldwide