It was the first capital city of Indokistan until 2012, when it was moved to Slobodan. Jumstraad was the cradle of Indokistani micronational movement, as concept of Indokistan was first conceived on the city, and its identity was consolidated inside Jumstraad.

The name was founded in January 2011, based on a type of stone scattered over the city called "jumstone" (batu jum) by Ali Akbar. Citizens later added a suffix -grad to the stone name, in order to create the name for the new region, which was agreed by Farhan Abdurrahman and immediately named the city as such. Jumstraad name then could be interpreted as "city of jumstone".

Farhan Abdurrahman decision to divide Indokistani territory - that was previously a city-state - into three cities was supported by citizens, with the city was officially established in the end of January 2011, shortly after the victory of the January Revolution. Saifi Isa was appointed as the first caretaker leader, as he also handle the sister cities of Flastraad and Trastraad.

The city became the main battleground during the Indokistan-Ntolian War in April 2011, with majority of armed conflicts were occurred inside Jumstraad. Battle of Jumstraad, a fight for the capital between Indokistani citizens and Ntolian invaders on 7 April, was the main conflict occurred in Jumstraad during the war.

The city lost its importance in 2012, when majority of Indokistani citizens left Jumstraad to migrate to other city. With citizens began to be scattered and form new cities from their new location, Jumstraad was finally stripped from its capital status in mid-2012, with its title and function was transferred to the city of Koskenniemi. 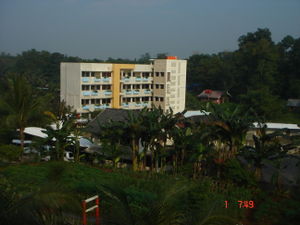 Panorama of Jumstraad, the Bolshoiskii Building and Agricultural center is visible

Despite of its declining importance inside the Federal State, Jumstraad was remaining as one of the most important city inside the Central Indokistan state, especially because of its history, yet was not the capital for the state also. Indokistani citizens frequently felt nostalgic to the city, as Indokistani golden era was occurred during Jumstraad as the national capital since 2011 until 2012.

Jumstraad was led by a mayor, that was appointed by the Prime Minister, and was a cabinet member. Since the last mayor, Badra Shidqi, resigned from his position during the Emergency Government in 2012, Jumstraad never replaced its mayor since all municipal governance was centralised at that time. Since the formation of the Federal State, Jumstraad was ruled directly by the state governor, Farhan Abdurrahman, until 2016.