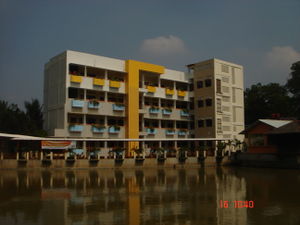 This article is about a building in Jumstraad. For information about Indokistani former parliament, see Bolshoiskii Parliament

Bolshoiskii Building (Indonesian: Gedung Bolshoiskii), formerly "Farhangrad Building" (Indonesian: Gedung Farhangrad), is a 4-storey building located in the former capital city of Indokistan, Jumstraad. This building is a national symbol with a very important historical value since it becomes the center of Indokistani national activities until 2012. This building formerly hosting the president, prime minister, and cabinet members offices.

The building actually have no distinct name on the early days of Indokistan, but later named "Farhangrad Building", in honor of first president Farhan Abdurrahman during the height of his cult of personality. In October 2011 as effect from De-Farhanization policy, the building was renamed as "Bolshoiskii Building", from Russian word means "great" or "large". The building retains the new name despite of request from pardoned Farhan to revert the old name, after the policy was cancelled.

The building was first used as a high school building from year 2008 until 2010. In 16 September 2010, Indokistani founders signed the declaration of establishment of Indokistan on this building, and immediately declared the usage of the building to be the center of national political activites.

The building plays a major role during Indokistan-Ntolian War, when Ntolian troops attacked the city and this building in 7 April 2011, causing damage. Despite of the damage, the third floor of the building becomes a place of refuge for Indokistani citizens fleeing Ntolian armies, which all survived. It also became the host of first meeting between Indokistan and Nameless politicians in August 2011.

In September 2011, the building hosted the entire process of the first presidential election, including as the voting booth and vote counting process location.

During the Emergency Government regime in mid-2012, Indokistani capital was moved from Jumstraad to newly-established city Koskenniemi in Slobodan, which caused the Bolshoiskii building no longer used as national political offices. After the abandonment, the building was reused as school. Prior to the transfer, Indokistani founders planted a memorial plaque to commemorate and "thanking" the building to host the country political activities.

Inside the building complex, there are the main building and connected by a platform, a dining hall located right from the building.

The main building consists of four stories with separated building contained the stairs connected by bridge on every floors. First three floors have the same layout, with four rooms and a toilet. The first and second floor are used for president, prime minister, and government ministries offices. The third floor consists of laboratories that became the central office used by Indokistan Technology Development Center and the main office of the president and prime minister. The fourth floor consists of one large room sometimes used for parliamentary meetings and several large-scale gatherings.

Connected by a platform, a dining hall located in front of the building. This dining hall consists of restaurant and food shops, and sometimes used as place of resting by government officers. The hall hosted the only negosiation attempt during Indokistan-Ntolian War in April 2011.

In front of the main building, there are large ponds with three floating gazebos which connected by long, shaded hallway. Along the hallways, there are several cages storing pets, including birds and monkeys.