2014 Indokistani State Leaders Meeting (Indonesian: Rapat Pimpinan Negara Bagian Indokistan tahun 2014) was a special session of the National Forum of Indokistan took place on 1 July 2014 in Indokistani capital Suwarnakarta. The meeting was notable because it was the first and the only time that all of Indokistani state leaders meets physically.

Indokistani citizens was separated in great distance, so that the National Forum sessions only able to be held inside an online or social media. Despite of these issue, members of the Forum always burn the spirit and pleaded to each other that someday they would meet each fellow members physically.

July 2014 was a holiday season inside Indonesian education system, which all of National Forum members were attended. The period was seem fit for all leaders to finally meet each other physically, since they have sufficient time allocated for such arrangement. Aziz Pahlevi, because of his extreme distance were unable to visit Suwarnakarta, yet promised to join the meeting through online media, which was done during the meeting session of 1 July.

The meeting was started in 9.00 AM (UTC +7), beginning with Suwarnakarta city sightseeing and a visit to the exhibition on the National Archives building. During the visit, attendees presented with various historical artifacts, including the first-sewn national flag and a time capsule installed there.

After the sightseeing and visit to places, attendees were directed to the meeting room inside Suwarnakarta Governor Office, the designated place for the meeting. The meeting was started in 11.30 AM, and was set to informal in nature, so attendees could freely express their thoughts and ideas. Aziz Pahlevi then joined the meeting through online media. On the arranged meeting, a constitutional amendment was discussed, with the final decision was to hold it until the next Forum session. The meeting also discussed the latest world situation, especially on the emergence of the Islamic State of Iraq and the Levant, which all attendants agreed to condemn by calling it a "false caliphate".

The meeting was ended in afternoon and a photograph session was done afterwards. 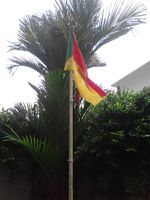 Indokistani flag was flown to commemorate the meeting

To comemmorate the day, several members of the National Forum proposed "Unity Day" to become an official holiday, but with no success.