Flag of Indokistan (Indonesian: Bendera Indokistan) was one of the official national symbol of Indokistan. The flag was derived from Socialist Republic flag created in December 2010, modified to the official version in January 2011, just after the end of the January Revolution. The flag had became the perpetual symbol of Indokistani statehood movement and survived for almost 6 years, compared with the national emblem that was continuously modified, with its longest surviving version only survived for more than 2 years. 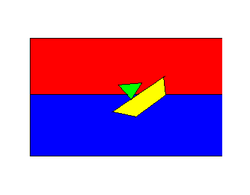 First flag of Indokistan, used from September until December 2010

The first flag used to represent Indokistani statehood movement drawn for the first time on 16 September 2010 by Nabil Ihsan. The flag were bicolour with horizontal lines of red and blue, represent spirit of its founders to create Indokistan and waters inside Indokistan. Thanks to the first intention to create a new nation as a joke, it had a picture of sinking boat inside it with no meaning bear on the symbol.

Flag of communist Indokistan, used from December 2010 until January 2011

The flag was created after the establishment of the Socialist Republic in December 2010. The design was allegedly created by the Communist leader himself, despite of no obvious evidence described the process of creation of the flag. The flag will become the template of the next flag used by Indokistani government.

The red-blue strip were not replaced, with only sinking ship replaced with triangular object bearing the hammer and sickle symbol in the hoist part of the flag. The meaning of colors of the flag largely unchanged, with minor readjustment to fit with their Communist ideals - red color also represents the color of Communist movement.

This flag was used from January 2011 until July 2016, and become a perpetual symbol of Indokistani statehood movement since after. The flag was modified from the Communist flag, by replacing the hammer and sickle with a star and to change the blue color with yellow. After its start of use in January 2011, the flag was initially criticized because of its similarity with the Communist flag, but then became acceptable as time past.

In mid-2011 until early-2012, the flag experienced several proposals to change the design. Vice president Dicky L. K. proposed that the flag should be triangular, that if this proposal was approved, will made Indokistan a few micronations with non-rectangular flag. Second proposal was made by Farhan Abdurrahman, which was to eliminate the beak-like form so the triangular form of the flag would be a true triangle. Both proposals were defeated.

There are no official name for this flag, so citizens just refer the national flag as "Bendera" (Flag) in informal and formal conversation. Another name of the flag was also given, it was named "Bendera Revolusi" (Revolution Flag), originated from the period of the first usage of the flag - the name was unpopular and rarely used.

The color red means bloods that shed during fight to create a free Indokistan, and the color yellow represented prosperity. On the triangular object, the form is similar to animal with beak, interpreted as duck, that represent flora and fauna diversity of Indokistan. A white star inside the blue circle later added to give an "eye" for the "duck", that represent purity, water, and sky.

Proposal on the official adoption of an alternative flag (national flag without blue circle and white star) was approved by the national forum on 8 December 2014, made Indokistan to have two versions of national flag. Both flag had equal status and was allowed to be used on official state events interchangeably. This proposal was raised to simplify the process to create the national flag, after several tailors received order to made the flag complained that the design was too complicated.

This flag had been classified as "Original" by Micronational Vexillological Association.

Indokistani states and territories was granted rights to adopt a specific flag for their region.

The national and state flags had been regulated in the constitution, which stated that the flag is the national symbol of Indokistan, and also allowed states to have their own flags.

The flag may flown at any time and anywhere, by civilians, government officers, and military. The flags were allowed to be created by paper that attached to a pole, or by printing it.

The flag was allowed to used as a watermark for state television, or as letterhead of treaties, state documents, and passports.

When the flag is raised, citizens were encouraged to accompany the flag raising by singing the national anthem, and people nearby the flagpole where the process of flag-rising was done should pay their attention and respect to the flag.